A Day in the Life of a Seminarian & Priest 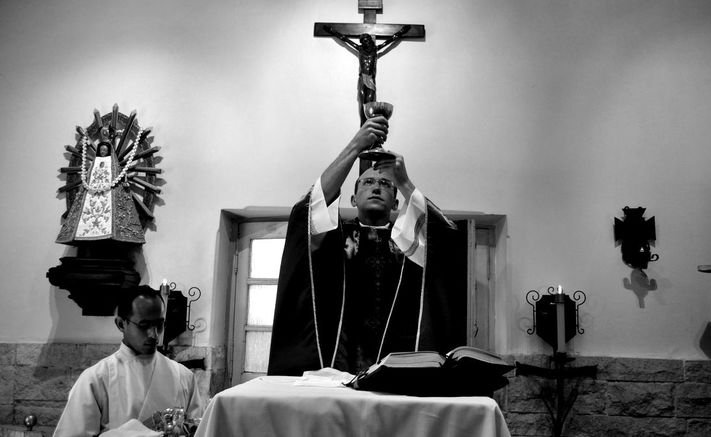 An IVE priest celebrates Mass in the Chapel of the Annunciation in San Rafael, Argentina, the first chapel of the Institute.

An accusation often leveled against priests and seminarians is that we don’t do anything. There are not many, if any, tangible results that are easily seen by outsides. In the eyes of the world there is just not much to show for our eight years in the seminary or in our day to day lives. Sometimes it is hard for us even, as seminarians and priests, to remember the extremely important things that we do each day.

So I want to put a day in the seminary in its proper perspective.

You wake up and do spiritual reading. You learn the deepest truths of reality from the men who have dumbfounded the rest of the world. Many worldly people boast of their knowledge of science but their science still can’t explain the miracles these spiritual writers performed on a daily basis. Science and medicine still can’t explain Padre Pio’s stigmata, bilocation, healings, etc. and he did these things almost every day.

You pray the rosary and you go to adoration. Many worldly people brag about meeting important people. They will tell you all about working at the White House and the day the President passed by. Every day we have a conversation with the Queen of Heaven when we pray the rosary and afterward we meet with the King of the Universe for an hour, face to face.

At Mass, Almighty God gives us His written instructions and these are explained and applied by one of His confidantes. We see before our eyes the sacrifice of the Son of God on our altars, the same sacrifice that redeemed the whole world. We then receive this saving God and are mystically united to Him a way too profound for this world to ever understand.

​If a priest were ordained and only got to celebrate one Mass, he would have done more to better the world in that half hour than he would have by all the prayers and sacrifices of his entire life, because the Mass is the sacrifice of Christ, it is infinite like Christ.

“It would be easier for the world to survive without the sun than to do without Holy Mass”
~ St. Pio of Pietrelcina.

“The angels surround and help the priest when he is celebrating Mass”
~ St. Augustine.

“If we really understood the Mass, we would die of joy”
~ Saint Jean Vianney.

All this, by the way, is before breakfast.

When, God willing you are ordained priests, you can add to your daily routine washing souls clean of their original sin and giving of sanctifying grace in baptism, fortifying souls to make the passage from this world to the next in anointing of the sick and Viaticum, reconciling a lost soul to God in confession. We should think deeper about this one. When someone comes to you confessing their sins, no matter what they did, if they were a murderer, a drug addict, haven’t confessed in decades, etc., provided they are sorry, though their sins be as scarlet, by a wave a your hand and a word from your mouth, they will be made as white as snow. The mercy of God will be applied to them. By the Precious Blood and sacrifice of God these souls receive the life of the Trinity back into their souls.

So when the temptation to think that you could be doing something better with your time comes, remember this. There is nothing more important than the work of the priest. Let people say and think what they will. They talk about making the world a better place but we are the ones who can actually do this, through God’s grace. They talk about changing the world but men like the apostles are the ones who actually do it. Remember, they were accused of turning the world upside down. “And when they could not find them, they dragged Jason and some of the brethren before the city authorities, crying, ‘These men who have turned the world upside down have come here also’” (Acts 17:6).

St. Jean Vianney said of the Priest, “If I were to meet a priest and an angel, I should salute the priest before I saluted the angel. The latter is the friend of God; but the priest holds His place.

St. Teresa kissed the ground where a priest had passed. When you see a priest, you should say, “There is he who made me a child of God, and opened Heaven to me by holy Baptism; he who purified me after I had sinned; who gives nourishment to my soul.”

The lives and work of seminarians and priests could not be more productive or more important.

​May our Mother, the Queen of Paradise obtain for us the grace to be faithful to this incredible calling.