How Much is a Life Worth? 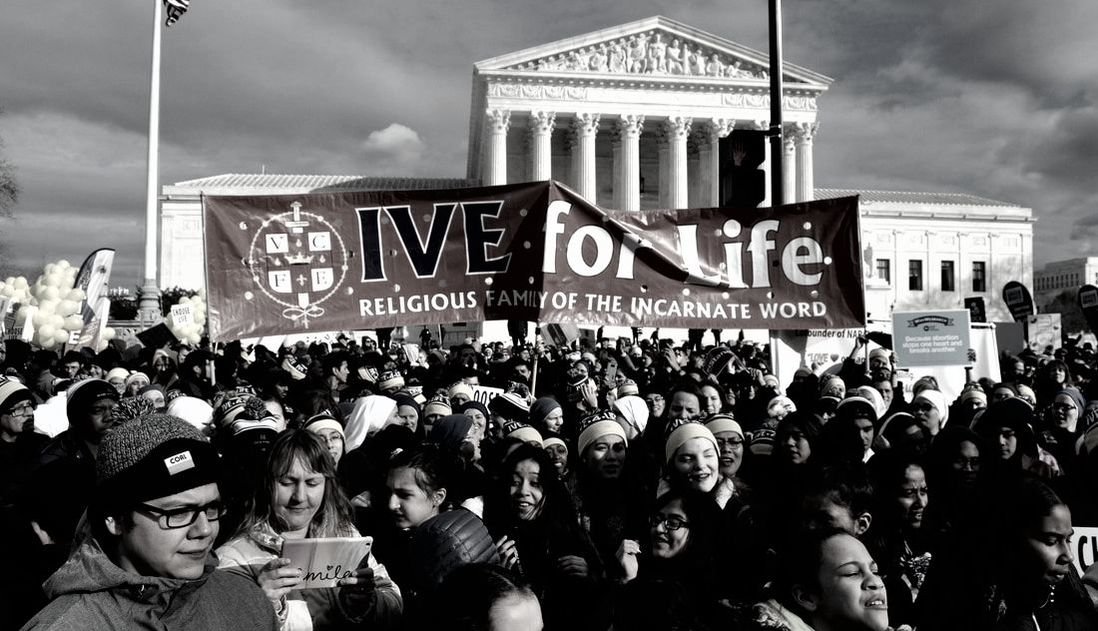 Mass for Life – Friday, January 27th, 2017The Religious Family of the Incarnate Word stops in front of the U. S. Supreme Court Building during the March for Life 2017.

Every day of our lives, and in a particular way when we come to the March for Life, we’re faced with a very important question, one of the most important questions of all, and that question is: what is the value of human life? What is a life worth? So, let’s consider three recent examples, three instances, where human life has been given a value, a price tag, and see which one is right.

The first one: on June 9th, 2016, so, just about seven months ago, California’s physician-assisted suicide law went into effect; it’s a law that allows people who are terminally ill, meaning, they have an illness that they’ll die from, to ask their doctors for a prescription that will kill them; the doctor gives their patients to tools to kill themselves. Now, in California there’s a young mother with four kids, named Stephanie Parker, who is terminally ill, but her doctors have always kept working to give her the highest quality life possible. Once the law came into effect, though, Stephanie’s insurance company refused to pay for more treatments; after all, she’s just going to die anyways. However, the insurance company did tell her that they would almost completely cover the cost of that lethal dose of suicide pills; Stephanie would only have to pay “the incredibly low cost of one dollar and twenty cents.”[1] So, I ask you: is that what a life is worth? A dollar twenty? That’s what the insurance company says.

​The third example is a little different: a professor of theology was in Paris with some of his students. It was evening, and, as is fairly common, especially in big cities, there was a prostitute on the corner. Much to the horror of his students, the professor left the group, went up to the woman, and asked, “How much do you charge?” She replied, “Fifty dollars.” Fifty dollars. So, I ask you: is that what a life is worth? Fifty dollars? That’s what the woman herself said; she must know, right?
So we have three examples, and three different prices: is life worth a dollar twenty? Or five hundred, fifteen dollars, and ten cents? Or fifty dollars?

​The problem with all these prices, with all these values, is that the value of a life, be it my life, your life, or any human life, isn’t set by the lowest bidder; it can’t be given a sale price, and it’s not discounted when it’s broken or has problems or difficulties. Even if we ourselves don’t think it’s worth much, we don’t get to set the price.

Fortunately, our third example isn’t finished. The story continues: after the woman valued herself at fifty dollars, the professor looked her up and down, and said, “No, that’s too little.” Taken aback, she thought for a moment and said, “Oh yeah, for Americans, it’s one hundred fifty dollars.” The professor stepped back again, and replied, “That’s still too low.” She quickly answered, “Uhh, oh yeah, the weekend rate for Americans is five hundred dollars.” But again the professor replied, “No, that’s still too cheap.” By this time the woman was a little irritated, so she finally said, “Ok, fine: what am I worth to you?”

The value of a life isn’t set by the lowest bidder; it’s not like a contract for constructing a building or repairing a road, where the one who offers to do it the cheapest wins. Rather, the value of a life is set by the highest bidder: it’s more like an auction. Even if absolutely everyone else in the universe values that life at a dollar twenty, or five hundred, fifteen dollars, and ten cents, or fifty dollars, it doesn’t matter: it doesn’t affect the value. Even if we ourselves think it’s worthless or that a dollar twenty would be overpriced, it doesn’t change anything. The value of that life is set by the one person who pays the price for it, and the price for us was paid when “God so loved the world, He” sent the most precious, the most valuable, and most beloved thing He had, “His only-begotten Son,” into the world to suffer and die for us. That is how much a life is worth.

The reason for this struggle is that there is someone who doesn’t want us to know that value; there’s someone who wants us to sell ourselves short, or sell ourselves cheaply. In John’s Gospel (8:44), Jesus Himself tells us that “[the devil] was a murderer from the beginning and does not stand in truth, because there is no truth in him. When he tells a lie, he speaks in character, because he is a liar and the father of lies.”

When we think about it, that’s sort of an odd thing to say: “the devil was a murderer from the beginning.” The first time the devil shows up in the Bible, is when he’s tempting Eve. There, in the beginning, he’s a liar, but he doesn’t seem to be murdering anyone.

What’s the tactic that the devil uses to murder us? He always, always starts with lies. Usually he starts with little lies, like, “You can do this or that, and no one will get hurt,” or “This sin is not a big deal.” Later, though, the lies build on each other, and get bigger. He tells us things like, “Freedom means doing whatever you want,” and “That person’s life isn’t worth living,” which leads to the biggest and worst lies of all: “Your life isn’t worth living,” or “You can never be forgiven.” These are the worst, because they make us doubt the whole reason that we’re valuable in the first place. They make us doubt God’s love for us, and if we start to doubt that, nothing else makes sense anymore.[5]

As we prepare for the March, let us ask, through the intercession of Mary, Mother of Life and Mother of Truth, for the grace to always remember our dignity as sons and daughters of God, and to be able to share the joy and wonder of that truth with all those around us.

[2] An old number, but it’s probably still in the ball park: https://www.lifesitenews.com/opinion/does-abortion-reduce-welfare-costs. Accessed 1-22-2017. A more recent article sets the costs as follows: “The Guttmacher Institute says that the average cost of a late (10-week gestation) first trimester surgical abortion in 2011-2012 was $480. Planned Parenthood says on its website that it charges up to $1500—more than three times the average cost! And while the average cost for a medication (pill-induced) abortion is $504, Planned Parenthood charges up to $800!” https://www.lifesitenews.com/pulse/planned-parenthoods-abortion-fees-skyrocket-is-it-milking-obamacare-tax-dol  Accessed 1-22-2017.

[5] Cf. Address of His Holiness Pope Benedict XVI on the occasion of Christmas greetings to the Roman Curia, Clementine Hall, Thursday, 22 December 2011: “Where does [joy] come from? . . . Certainly, there are many factors at work here. But in my view, the crucial one is this certainty, based on faith: I am wanted; I have a task in history; I am accepted, I am loved. . . .  Those who are unloved cannot even love themselves. This sense of being accepted comes in the first instance from other human beings. But all human acceptance is fragile. Ultimately we need a sense of being accepted unconditionally. Only if God accepts me, and I become convinced of this, do I know definitively: it is good that I exist. It is good to be a human being. If ever man’s sense of being accepted and loved by God is lost, then there is no longer any answer to the question whether to be a human being is good at all. Doubt concerning human existence becomes more and more insurmountable. Where doubt over God becomes prevalent, then doubt over humanity follows inevitably. We see today how widely this doubt is spreading. We see it in the joylessness, in the inner sadness, that can be read on so many human faces today. Only faith gives me the conviction: it is good that I exist. It is good to be a human being, even in hard times. Faith makes one happy from deep within.”