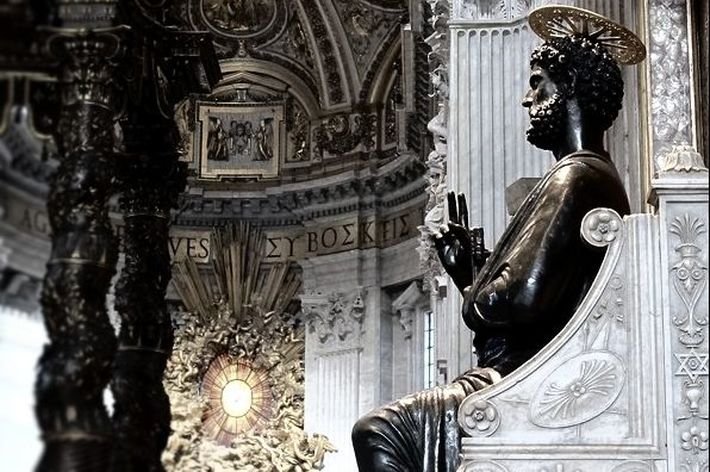 Today we celebrate the Feast of the Chair of Saint Peter, which isn’t simply a celebration of a physical object or of just Saint Peter; it commemorates that “privileged sign of God’s love,” the papacy, and the spiritual authority entrusted to that supreme shepherd to guide the entire people of God.[1] To be united with Peter and His successors is to be united with Christ, and perhaps we have no better example of what this belief might cost than the life of His Eminence Ignatius Cardinal Kung Pinmei, Bishop of Shanghai.

​Bishop Kung had been Bishop of Shanghai and Apostolic Administrator of two other dioceses for only five years when, during the night between September 7th and 8th, 1955, he was arrested by the Communists, along with over 200 other priests and Church leaders. Several months after his arrest, he was brought to the old Dog Racing Stadium in Shanghai, where, in front of a mob, he was supposed to confess his crimes. However, the crowd was silent, and when the tiny bishop (he was just barely five feet tall) was pushed to the microphone, rather than confess, he yelled, “Long live Christ the King, Long live the Pope.” The crowd responded immediately, “Long live Christ the King, Long live Bishop Kung.” Of course, he was immediately put into a police van and “disappeared,” until his trial five years later in 1960. The night before the trial, the chief prosecutor offered him a deal: break with Rome and the pope, and gain freedom and a leadership position in the Patriotic Church, or refuse, and face imprisonment. Kung’s answer was clear: “I am a Roman Catholic Bishop. If I denounce the Holy Father, not only would I not be a bishop, I would not even be a Catholic. You can cut off my head, but you can never take away my duties.”

Naturally, Bishop Kung was found guilty, and sentenced to life in prison. However, he was kept in the worst of conditions: he was allowed no visits, even from family, no letters, and no packages. His cell had no chair or bed, and he sat and slept on the concrete floor. Many of his thirty years in prison were spent in solitary confinement, in absolute confinement, so much so that he never heard of the Second Vatican Council; when he entered prison, Pius XII was pope, when he left, it was John Paul II. He simply missed the entire pontificates of John XXIII, Paul VI, and John Paul I; he was in prison because he was loyal to a Pope he didn’t know by name, whom he never celebrated Mass for, and whom he had no assurances even know about his plight.

Finally, in 1985, after 30 years of imprisonment, Bishop Kung was released from jail to spend another 10 years under house arrest in the home of the Patriotic bishops, the same ones who had betrayed the Pope and usurped his diocese. Shortly before his release from jail, Jaime Cardinal Sin, the archbishop of Manila, came on a friendship visit to China, and requested to meet with Bishop Kung. In a display of liberality, the Association approved the meeting, but staging it in such a way that the two bishops wouldn’t be able to talk in private. The arrangements were made for a banquet, with Sin on one end of the table, Kung on the other, and some 20 Communist and Patriotic Association officials in between.[2]

Of course, the atmosphere was tense, and Cardinal Sin, known for his sense of humor, dryly suggested that each person sing a song to entertain the others on this “friendship visit” to lighten the mood. When the time came for Bishop Kung to perform, Cardinal Sin invited him to sing. In the presence of his captors and informants, Bishop Kung looked intently at Cardinal Sin and sang “Tu es Petrus et super hanc petram aedificabo Ecclesiam meam” (You are Peter and upon this rock I will build my Church). Bishop Kung courageously conveyed to Cardinal Sin that in all his years of captivity he remained faithful to God, to his Church, and to the Pope, God’s Vicar on Earth. After the banquet, Aloysius Jin, the Patriotic Association’s Bishop of Shanghai, rebuked Kung, asking “What are you trying to do? Showing your position?” Bishop Kung quietly answered, “It’s not necessary to show my position. My position has never changed.”

Unbeknownst to the two bishops, there were two cardinals at that banquet: Cardinal Sin, but also Cardinal Kung, who had been made cardinal in pécctore by Pope Saint John Paul the Second six years prior, in 1979. He would learn of his appointment only ten years after the fact, in 1989, during a private audience with the Pope, and only in 1991 was it made public.

After he left China, Cardinal Sin immediately transmitted Bishop Kung’s message to the Holy Father and announced to the world: this man of God never faltered in his love for his Church or his people despite unimaginable suffering, isolation, and pain.

In Mark’s version of today’s Gospel, Peter’s confession of faith, both times that Jesus “asks” His disciples questions, namely, “Who do people say that I am?” and “But who do you say that I am?,” Mark puts the “asks” in the imperfect tense, meaning “the action happened continually or repeatedly.” Along the way, Jesus kept asking those two questions to His disciples, time and time again, until finally Peter gives his confession of faith.

In a similar way, too, time and time we’re asked that question: who is Jesus Christ? For us, that answer in part relies on knowing who Peter is, as Saint Jerome wrote so many years ago to Pope Saint Damascus: “As I follow no leader save Christ, so I communicate with none but your blessedness, that is, with the chair of Peter. For this, I know, is the rock on which the church is built!” Peter, the Pope, is the visible sign of Christ’s love for us, which provides us with a shepherd to guide us to enteral life. With a song to our Lady, let us ask for the grace to always live with Peter and under Peter.

[2] Cf. Mark A. Noll and Carolyn Nystrom, Clouds of Witnesses: Christian Voices from Africa and Asia (Downers Grove, IL: InterVarsity Press, 2011) 265. Accounts vary as to whether the meeting came before or after Kung was released from jail, but multiple accounts and the testimony of another cardinal lead me to think it was just prior to his release.