The Priest and the Cross 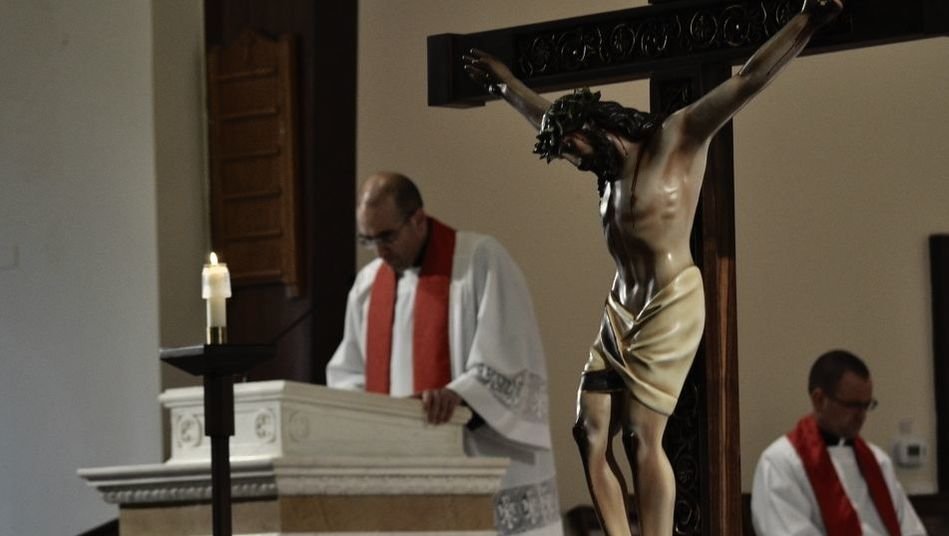 Homily preached
Seminario “María, Madre del Verbo Encarnado”  – San Rafael, Argentina
The wisdom of the cross was the wisdom that attracted the priest. He perceived, in the midst of confusion, that only in Christ’s school would he be taught the marvelous and unique lesson of the Cross. He realized that the cross was folly in the world’s eyes, but, raising his eyes to Christ on the cross, he understood that the folly of God was wiser than the wisdom of men (1 Cor 1:25). ​
Then he thought, “If the Word became flesh, if the Son of God, the Second Person of the Most Holy Trinity, for love of men, became incarnate in the womb of the Most Holy Virgin; if He, the Son of God, taught me that the true path lies in the Cross, and He cannot err, because He Himself said it: Whoever wishes to come after me must deny himself, take up his cross, and follow me (Mt 16:24), then there is no other path to holiness than the way of the cross.” Then, as he raised his eyes he saw the Son on that cross, with His arms extended, as if embracing him and all humanity, and with His feet nailed, as if waiting for him and for all humanity, and realized that Christ was not content simply to teach, but rather first gave an example, and from then on, the priest didn’t want to know anything except Jesus Christ, and him crucified (1 Cor 2:2).

So it was that the Cross of Christ stole his heart, conquered him, gave him enthusiasm, and threw the priest into the greatest adventure which can be given to man while he lives upon earth: the total surrender of self to God. This is why there is nothing more beautiful on the face of the earth than a priestly heart, a heart that surrenders itself to God with an undivided and unrestricted love.

Then, because he fell in love with the cross, he pledged himself to her and, even more, he espoused her. Every true priest espouses the cross, and so he is used to suffering in his priestly life: the priestly vocation is not a vocation to have a good time, but to have a bad time, because there he must suffer misunderstandings, defamation, ingratitude, and persecution. It will bring him to the point of tears many times because, as Saint John of Avila says, priests are “the eyes of the Church, whose duty is to weep for all of the evils that come to the body,” just as Jesus cried upon the cross.

Sometimes, the pain and the crying come even without the priest wanting them to. I remember that in my first years as a priest we had organized a living Via Crucis on Good Friday to which many people came. That Saturday I sat from the morning on in the Confessional; I was there more than 11 hours, taking a few small breaks. The following day was the Solemnity of Easter, and there were many Confessions, and, moreover, I had to cele- brate three Masses with three homilies. At midday I could go home and eat lunch with my parents and my brothers. Later I returned to the parish for the evening Mass, took the 5:30 bus that left from the park, and, at a certain moment, I realized that tears had fallen from my eyes. Immediately I composed myself, and I reflected on what thing had provoked those sneaky and un- desired tears; I realized that it was all of the sins that I had heard those past days and all the suffering of those souls, as there is no greater punishment for a sinner than sin itself at the moment when they experience God’s tenderness. In another instance, this happened when one of our religious died, the seminarian Marcelo Javier Morsella. I had to be calm in front of the seminarians–for those seminarians had already been hurt too much by his death and didn’t need another hurt added to their tears–and so I had to contain my tears. However, in the morning I realized my pillow was wet, because during the night, while sleeping, I cried over what I could not during the day.

Finally, I want to make one last reflection, and it is with re- spect to the people: God doesn’t choose a priest from some fami- ly at random; God doesn’t choose a priest from some town at random. The choice is a grace for that family, for that town and, as such, it is a choice freely made by God’s infinite love. Don Orione said that “the family of a priest is saved down to the third and fourth generations.”