God’s Will, not Mine 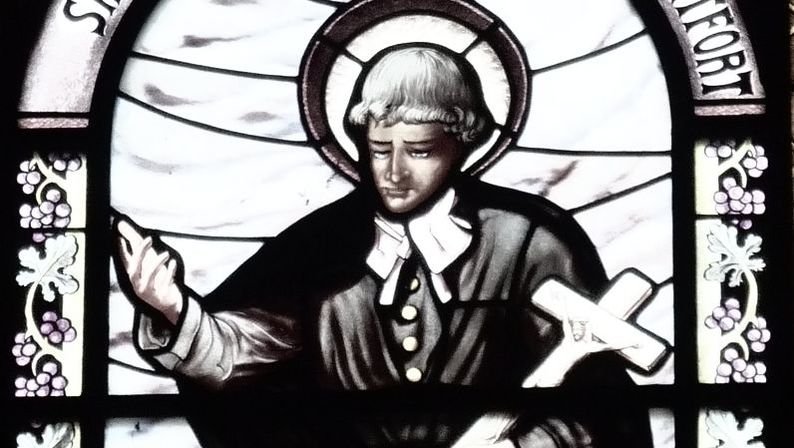 Today we celebrate the feast of Saint Louis de Montfort; there is, of course, plenty to say about him, but especially in the context of the today’s readings, I want to focus on just one incident in his life, one particular grace that he displayed: his complete and utter abandonment and conformity to God’s will.

In the first reading, the rabbi Gamaliel explains to the Sanhedrin that merely human endeavors are always doomed to failure, and that the Jews can’t expect to fight against God and win. In other words, God’s will is always accomplished, and the one thing that we must seek, as the Psalm recounts, is to dwell in God’s house, to be united to Him at every moment. Even when things seem bleak, as was the situation in today’s Gospel, God is there, in charge of the situation, no matter how sad, distressing, or embarrassing it might seem.

This brings us to an event in the life of Saint Louis de Montfort: the fiasco of the Calvary at Pontchâteau. After having preached eight popular missions in the vicinity of Pontchâteau, “Montfort dreamed of building a gigantic Way of the Cross, which would dominate the entire countryside.”[1] He obtained the land, and in May of 1709 work began. The labor was all volunteer; inspired by de Montfort, over 20,000 people from as far away as Italy and Spain came to help. Everything was donated as a gift to God. The work was finished, and the date for the blessing was set for September 14th, 1710.

However, there were some who were angry at Montfort, for whatever reason. They and those in power managed to convince the king that the Calvary was to be a fortress, a threat and risk to national security, and so, on September 13th, while Montfort was away preaching a mission, he received word that the blessing had been called off. He hurried on foot through the night in order to see the bishop, arriving, exhausted, on the morning of the 14th. The bishop gave him the sad news: although he had fought as hard as he could against the authorities, there was nothing that could be done. The king ordered the Calvary, so painstakingly and lovingly built by volunteers, to be taken down, block by block, by the peasants under the army’s watchful eye. “Montfort’s personal humiliation must have been nothing compared to the anguish he felt for all those who had invested so much of their energy and time in the Calvary of Pontchâteau.”[2]

At the bishop’s advice, Montfort went on retreat, but, in that time of silent suffering, the Jesuits who ran the retreat house were amazed at his attitude. As one wrote later:

I thought I would find him downcast and disappointed; I had prepared myself to do as much as I could to console him; but I was astonished to find him happier and more peaceful than I myself was. I said to him jokingly, “My, you are acting like a strong and courageous fellow!” . . . “I am neither strong nor courageous,” he replied, “but, thanks be to God, I am neither grievously pained nor desolate; I am at peace.” [I asked him] “You are content, then, that they have destroyed your Calvary?” “I am neither content nor discontent. The Lord allowed me to have it built; but now He has allowed it to be destroyed. Blessed be His Holy Name! If it had depended on me, the Calvary would have stood till the end of time, but since it depends upon God, may His will be done and not mine. I would prefer, o My God, to die thousand times . . . than to oppose your Holy Will.”[3]

Another Jesuit recalled: “His unchanging peace, tranquility, and equanimity during those eight days surprised me; I admired him. What I had seen and known of him before that time had made me think of him as a great and good man; but this patience . . . the serenity and even joy that I observed in his face, in spite of such a grievous blow, convinced me he was a saint.”[4]

This conformity, or uniformity, with God’s will, is what makes saints. Today, let us pray, through the intercession of Mary, Mother of our Risen Lord, and Saint Louis de Montfort, for the grace to embrace God’s will and love it with all our hearts.

Memorial of Saint Thérèse of the Child Jesus Today’s Gospel

Memorial of Saint Jerome Today’s readings ask us to reflect