The Altar is the Cross 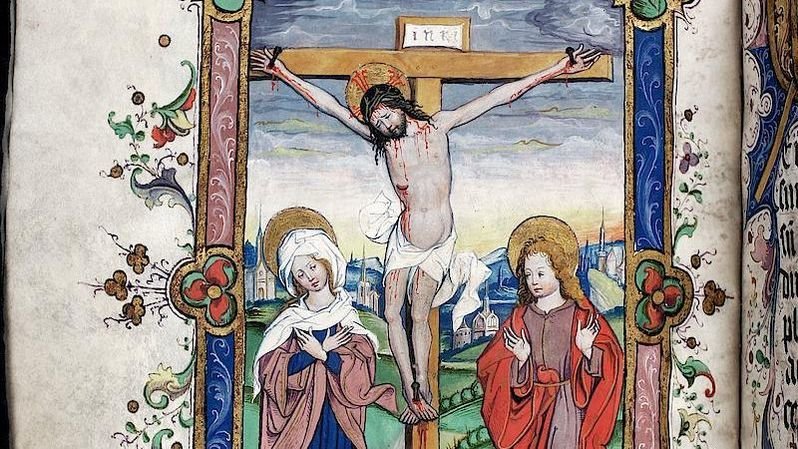 Fr. Theodore Trinko, IVE
Memorial of St. Paul of the Cross
Preached at The National Shrine of St. Elizabeth Ann Seton
Just like every Sunday of the year we celebrate Christ’s Resurrection, every Friday has traditionally been seen as a day to commemorate the Passion of Our Lord. This is particularly highlighted in Lent when we all are required to fast from meat on Friday. Therefore, it is particularly appropriate that we are celebrating today St. Paul of the Cross since he, as his name should indicate, had a great devotion to the cross of Christ. But a devotion for the cross is not something which is ought to be reserved to any particular group of Christians or guys with special names, but rather ought to be something present in all of our lives.We cannot call ourselves Christians unless we take up our crosses.
The cross has always been a symbol of our faith.[1] To the Corinthians, St. Paul wrote that he was determined to speak of nothing but Jesus Christ and Him crucified (cf. 1 Cor 2:2). No Christ without the cross nor cross without Christ. St. Rose of Lima stated that there is no other ladder to heaven than the cross.[2] Fulton Sheen taught that saints are formed in the shadows of the cross.[3] As Christians we are all called to be holy, to be saints; but it’s a dogma proclaimed by the church in the catechism that there is no holiness without renunciation, “the way of perfection passes by the way of the cross.”[4] Echoing the words of our Savior, who said that all His disciples had to take up their daily cross and follow Him (cf. Lk 9:23), the Second Vatican Council also taught that all Christians must be prepared to “follow Christ along the way of the cross, amidst the persecutions which the Church never lacks.”[5] To call ourselves Christians, teaches St. Paul, we must crucify our flesh with its passions and desires (Gal 5:24).Moreover, the cross serves as an example to us as to how we are to live our lives. St. Augustine said we should model our lives after the cross.[6] In the words of St. Thomas Aquinas “Whosoever wishes to live with perfection should do nothing other than to despise what Christ despised [on the cross] and to desire what Christ desired [on the cross].[7]

Perhaps the greatest reason for the importance of the cross in our lives, is based on that which it accomplished 2000 years ago. It was the price of our salvation. Before that fateful day on Calvary, heaven’s gates were closed and none entered into paradise. But now, through uniting ourselves to the cross, we are able to ascending into heaven. Think about this, the cross is always in an elevated position, we look up to it. By lifting up our heads we direct our attention to that heavenly realm to which we are called. But it is only possible to get there because the cross with its vertical beam has pierced the heavens and thus opened up a way for us to pass into our Father’s house.

Now, we have to ask, how do we unite ourselves to the cross? Fundamentally this takes place in baptism where we die with Christ by being submerged in the water only to rise with him upon emerging. That sacrament we receive only once, but on a daily basis we have the opportunity to unite ourselves to it in the Sacrifice of the Mass.[8]

This is the most important part of the Mass, the sacrifice of Jesus on the cross.[9] Not that Jesus is sacrificed again, but rather that same sacrifice He made 2000 years ago on Calvary’s hill is made present anew on the altar of the Mass. It is the same sacrifice made present under sacramental forms in an un-bloody manner. The vertical beam of the cross is planted on the surface of the altar at the moment of the double consecration. We can see this sacrificial aspect in a few moments surrounding the consecration.

1) Have you ever wondered why the bread and the wine are consecrated separately? It’s to represent death. When a man’s blood is separated from his body, that man is dead. So too with the sacrifice of the Mass, at the consecration there is a real making present again of the death of Christ on the Cross. 2) After the consecration the priest sings “The mystery of Faith,” and everyone responds, “We proclaim your death O Lord.”
3) If we listen to certain Eucharist prayers attentively (all the part which takes place when we kneel down), we’ll hear the consecrated Body and Blood called a victim, a holocaust, an offering, and a sacrifice.

And we are all called to spiritually unite ourselves to this sacrifice. Place ourselves spiritually on the cross with Christ out of love for Him who put Himself on it for love of me. Or in the words of St. John de Brébeuf, whose feast we celebrated yesterday, “Jesus you died for me, I want to die for love of you.”

And so today, at the moment of consecration, let us recall that we are at Calvary, we are at the foot of the cross of Christ. What would we say to Jesus if we were there 2000 years ago? What would we feel? What would we do? We cannot travel back in time, but the cross will come to us now, so we can say, and feel, and do all that we would have had we been there. May the Blessed Virgin Mary obtain for us the grace to have those same dispositions she had when she was at the foot of the cross. Amen.