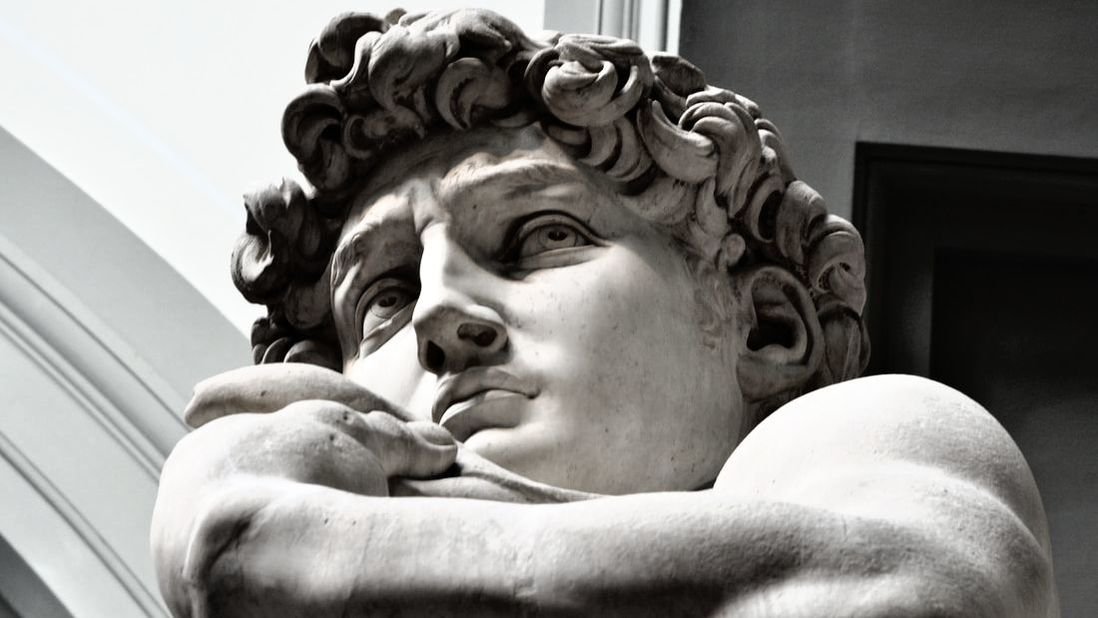 Fr. Nathaniel Dreyer, IVE
Thursday of the 4th Week in Ordinary Time
In today’s first reading, King David lays dying, and his last pieces of advice to his son Solomon include an injunction that is useful for us too. David tells his son: “Take courage and be a man.”In the Latin Vulgate, it’s esto vir. Esto vir: be a man, and it’s linked to practicing the virtue of courage (or fortitude). In fact, Saint John Paul II said just that: “To be men we need fortitude.”[1] “To be men we need fortitude.”

​Courage has to be at the heart of Christian and priestly life.

As Archbishop José Gomez of Los Angeles put it, we need “a retrieval of Christian fortitude as the centerpiece of a priestly spirituality centered on the mystery of the Cross.”[2] [However, all Christians need to be courageous; when the mother of the Maccabean brothers sees all her kids killed, the author qualifies her actions this way: she combined womanly emotion with manly courage (2 Mc 7:21: GNT)].So, we might ask ourselves: what does it mean to be courageous? We can consider three points: what courage is, what it concerns, and how to practice it.
​
What is courage? In the Summa (II-II, q. 123), Aquinas tells us courage, or fortitude, is the virtue that keeps us from fleeing or from running away from doing the right thing because we’re afraid, and what we’re afraid of is some evil that’s difficult to overcome. He continues, specifying exactly what it is that we’re most afraid of, meaning, what courage concerns: “It belongs to the notion of virtue,” he writes, “that it should regard something extreme (right: because you practice virtue in the most difficult moments; we see how great a sports star not when he is practicing, but rather when it’s at the end of a tight competition): and the most fearful of all bodily evils is death, since it does away all bodily goods. . . .
Therefore the virtue of fortitude is about the fear of dangers of death.” Fortitude is about fear of death and dying and he adds, “it must be granted that fortitude is properly about dangers of death occurring in battle.” But Aquinas gives battle a very general sense, meaning that I’m defending some good that’s under attack. We can think of the Book of Job which reads “Man’s life on earth is warfare” (Jb 7:1). For us, the greatest goods we have are our vocations, the grace in our souls, and the holiness God is calling us to. Courage, then, is about sticking to what we know we must do, even in the midst of fear of some sort of death, be it death to popularity, death to self, physical death, and so on. This is why Pope Saint John Paul the Second writes, “the virtue of fortitude proceeds hand in hand with the capacity of sacrificing oneself.”[3] We need to be manly men, who are capable of great things and giving themselves entirely to something because we entirely possess ourselves and are willing to sacrifice ourselves.

However, Aquinas gives a number of reasons why this is the case: on one hand, “because he that endures already feels the presence of danger, whereas the aggressor looks upon danger as something to come; and it is more difficult to be unmoved by the present than by the future.” The person who endures is in the thick of the danger; it’s already there. Likewise “because endurance implies length of time, whereas aggression is consistent with sudden movements; and it is more difficult to remain unmoved for a long time, than to be moved suddenly to something arduous.” Endurance implies a consistent or constant effort on the part of the one enduring.