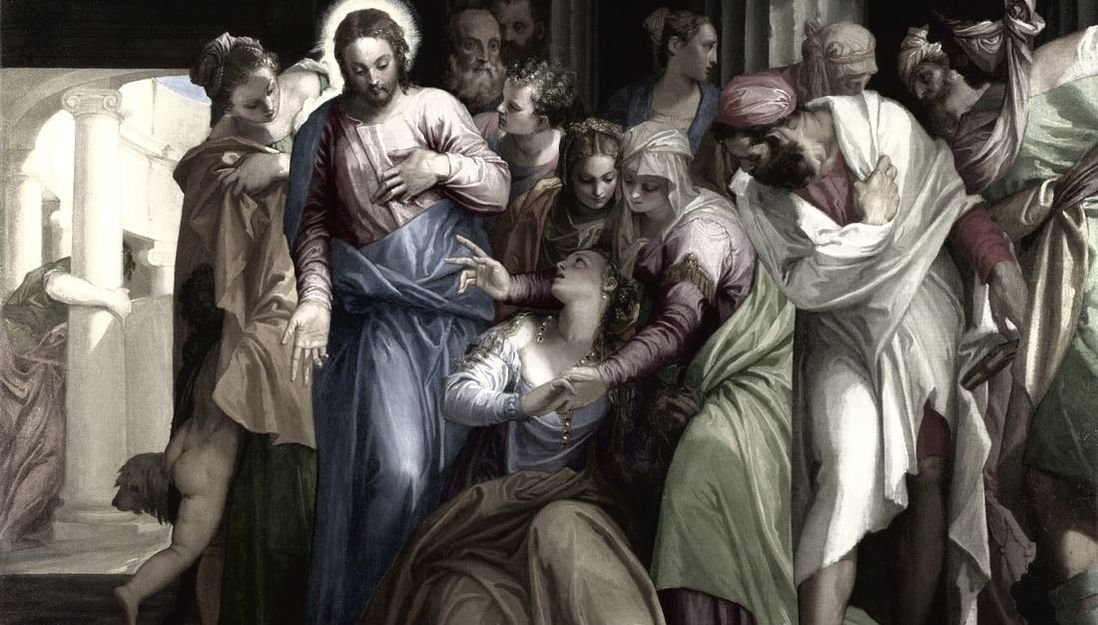 ​“They begged Jesus that they might touch only the tassel on His cloak” (Mk 6:56). If we meditate on the request of the citizens of Gennesaret, there are two truths that emerge. First, notice that, out of all the things the citizens of Gennesaret could’ve asked Jesus for, they asked only to touch His cloak, and not even the whole cloak, but just the tassel, the smallest part. They could’ve asked for spiritual healing, or salvation, or to love Him more, but they didn’t. Now, it’s not evil to ask to touch His cloak, and clearly they had enough faith in Jesus for Him to be able to work miracles for them, but Mark gives us the impression that they’ve missed the point: it’s as though they’ve forgotten which was greater: the tassel, or the One wearing the clock.
Last week we heard of the woman who was afflicted with hemorrhages; she too touched Jesus’ cloak and was healed physically, but Jesus had something even greater to give her: salvation and spiritual healing. “Daughter, your faith has saved you. Go in peace” (Mk 5:34). We can think, too, of the ten lepers: all were healed, but only one came back to thank Christ. Not only was that leper healed, but he was also told: “Your faith has saved you” (Lk 17:19).

So, what the point? The first truth is that these temporal healings, these tangible blessings and gifts, and, even more broadly, all of the talents, gifts, and faculties we have at our disposal, are good only inasmuch as they lead us to God; gifts are “fleeting and meaningless, while [they are] possessed, unless we can glimpse something of heaven’s eternity” in them.[1] This is Saint Ignatius’s Principle and Foundation: “The things . . . of the earth are created for man and to help him in pursuing the end for which he is created. Hence it follows that man is to use them as much as they help him to his end, and to rid himself of them if they hinder him.”[2]

We can think of Saint Alphonsus Ligouri’s example of a blind man who recovered his sight after praying to a saint. As he was leaving the saint’s chapel, he started to think that maybe having his vision would be worse for his spirituality, and so he returned to the chapel and prayed that, if it was better for his soul, he would prefer to remain blind. Sure enough, he went blind again.[3] Temporal things are only good if they lead us to God.

The second truth is that we shouldn’t be afraid to ask God for great things: Saint Theresa of Jesus used to say, “You pay God a compliment by asking great things of Him.” “You pay God a compliment by asking great things of Him.” Sometimes we limit God by only asking Him for small things, thinking that bigger graces, like the grace to become a saint, or for the conversion of our families, or whatever, might be too much. We become like the citizens of Gennesaret: all they wanted was to be healed physically, and that was enough for them; they are completely unaware of how generous Christ is, and of how much He wanted to give them. Today’s Gospel starts with the line: “After making the crossing to the other side of the sea, Jesus and his disciples came to land at Gennesaret.” That’s sort of an understatement: a few verses before, the disciples had gone off in the boat, and the wind went against them. During the night, Jesus appeared walking on the water, and the wind died down. Jesus did all of that simply to be with the people in Gennesaret.

[1] Words of Saint Henry recounted in An Ancient Life of Saint Henry. Found in the Office of Readings for his feast day.
[2] The first point in the Spiritual Exercises.
[3] Recounted in Uniformity with God’s Will
[4] Joseph I. Dirvin, Saint Catherine Labouré of the Miraculous Medal
Previous
Next