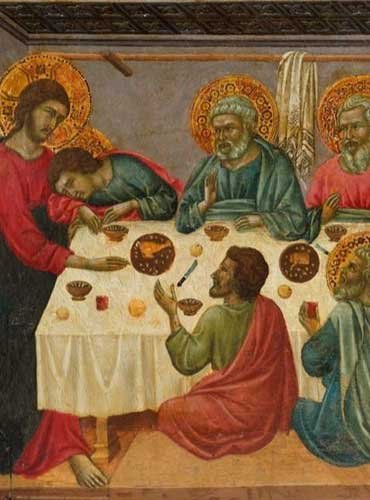 Fr. Nathaniel Dreyer, IVE
Tuesday of Holy Week
​In today’s Gospel John recounts for us the betrayal of Judas at the Last Supper. If we read carefully, we’re struck by just how merciful Jesus is, and we can see this in three of Christ’s actions towards Judas: first, where Judas was sitting, second, the giving of the morsel, and third, the fact that Jesus didn’t openly reveal Judas’ sin.
​
First, when we think of where people were sitting at the Last Supper, usually we think that Peter was on one side of Jesus, and John, “the one whom Jesus loved,” was on the other. However, if this were the case, as Fulton Sheen points out, Peter wouldn’t have asked John to ask Jesus the question: he could’ve just asked Jesus himself. Rather, it’s likely that Judas was seated right next to Jesus. Jesus wanted his betrayer as close as possible to Him, so that He could help him to repent. Christ never tires calling of out after those who He has chosen, encouraging them, and begging them to repent.
Secondly, the sign that Jesus offers, the giving of the morsel, isn’t simply meant as an indication of the one who will betray Him. Rather, among both Greeks and Jews alike, the offering of a morsel was a special gesture of friendship, a mark of favor. Hence, even though Jesus knew Judas would betray Him, He all the more offered signs of His love.Thirdly, it is noteworthy that Jesus never revealed the identity of His betrayer in grand or public fashion. “The Divine Mercy did not identify the traitor, for Our Lord hid from the Apostles the fact that the betrayer was Judas. The world that loves to spread scandals—even those which are untrue—is here reversed in the hiding of what is true. . . .  Even though our Blessed Lord knew the evil intention of Judas, He nevertheless acted kindly” (Life of Christ, 307). The Apostles probably would’ve killed Judas had they known his intentions. Yet, Jesus never revealed Judas’s secret; even at the very end, in the garden, Jesus would give Judas the chance to repent: “Judas, are you betraying the Son of Man with a kiss?” (Lk 22:48).

There are two lessons that we can take away from this. First, we are reminded of how great God’s mercy is. In spite of the great evil that was in Judas’ heart, Jesus showed him all the more love and affection in order to win back his heart and move him to conversion. If we truly desire to be forgiven for our sins, how much more willingly will Jesus hear our prayers and grant them!

Likewise, we’re reminded that Jesus is the example to imitate when it comes to our dealings with others. First, we should never despair of their conversion, since we know that God is more anxious to see them converted than we are. Likewise, however, we are reminded that we shouldn’t give in to gossip, complaining, or lack of charity and patience when people treat us poorly. Indeed, to really live out our faith, we need to go beyond simply not holding grudges, but rather to forgive and actively seek the salvation of those who meant to harm us.

The saints provide us with wonderful examples of this. The story is told that “the founder of the Society of Jesus, St. Ignatius of Loyola, once walked a hundred miles during the winter to nurse a man who had fallen ill — a man who, only a few weeks earlier, had stolen Ignatius’s meager savings.” Likewise, “during the persecution of the Church by Queen Elizabeth I of England, the priest and martyr St. Edmund Campion was betrayed and arrested; while in prison, he was visited by the man who had betrayed him. Not only did Edmund forgive his betrayer; he also urged him to leave England, where he might be in danger himself, and gave him a letter of safe-conduct to a Catholic nobleman in Germany.”[1] To do these good deeds is simply to follow the example of Jesus, and we can ask ourselves: do we really imitate Jesus in His charity and forgiveness?

Today, let us ask, through the intercession of Mary, Refuge of Sinners and Our Lady of Sorrows, for the grace “of sorrow, regret, and confusion because the Lord is going to his Passion for my sins.”