Responding to the Cross 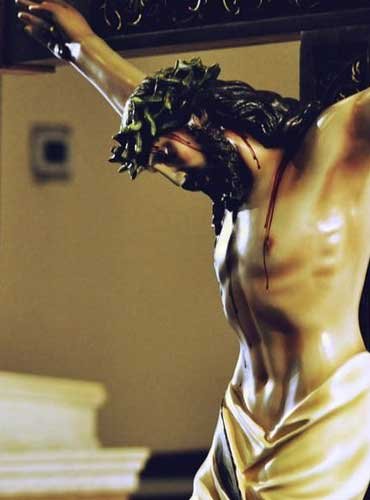 Fr. Nathaniel Dreyer, IVE
Good Friday
As we recall the Lord’s Passion and Death today, we are confronted with two very different ways of looking at reality. We have the worldly way, and the Christian way.In the eyes of the world, Calvary was nothing more than an insignificant hill that just barely stuck out of the dirt of Jerusalem. It was a just mound in the background of a forgotten place, outside of the paths of civilization, in the remotest corners of the Roman Empire. The events of Good Friday were simply another drama of hatred and jealousy, of people who cried in a small paved plaza asking for one conviction among so many others, a miniscule incident that was forgotten in the murmur of the Passover feast, an incident that might barely merit even a single line from the writers of the era.

But in the eyes of God, that is, in reality, the sacrifice of Christ is the real constructor of history; it is the center at which everything converges and the heart from which everything radiates. It, and it alone, is the event that gives meaning and unity to all other events in the world, in history, and throughout the centuries. Apart from the cross, nothing makes sense; with it, everything takes on new light and new clarity.

Even in Jesus’ time, as He was making His sacrifice, we find both of these ways of looking at things. We can consider the first in how the soldiers responded and how Pilate replied, and, finally, we can see God’s way of seeing things how Mary answered.

We just heard the Passion according to Saint John, and we are struck by how brutal they are to Jesus. They seize and bind Him in the garden, they strike Him as He answers the high priest, they scourge Him, mock Him, crown Him with thorns, spit on Him, and crucify Him. Even at the end, when it seems He has nothing left, they divide His garments and cast lots for His tunic. They leave Jesus Christ with nothing. Yet, oddly enough, when Jesus said to them, “I AM,” in the garden, they turned away and fell to the ground. The power with which He uttered the Divine name forced them, even against their wills, to worship Him.This is so common in our world: we see people who refuse to believe in God, who mock all things religious, and scorn and laugh at God. Jesus Christ wanted nothing more than to save these people, and all they did was refuse. But, as the proverb rightly says, “The one who spits against heaven, spits in his own face.” To refuse to love God and to accept His love for us doesn’t destroy God; it destroys us, since it takes away our only hope for salvation and peace. Yet, even their anger and resentment in a sense bears witness to the God whose presence they cannot stand. Men and women cannot become so angry and so indignant with imaginary beings; their furious responses are in a way a witness to the God they claim not to believe in.

Even in our own lives, sometimes we have places or things where we refuse to let Christ reign, where we don’t let God be God. But, Jesus comes and dies for us, and dies in the most painful way possible, in order to show us that He wants to love us entirely; He wants to come into every aspect of our lives, every moment of them, and make them new, as He says in the Book of Revelation: “Behold, I make all things new.”
​
We can also see Pilate’s reply: Pilate knows that Jesus is something special. He knows that Jesus is innocent, and he says it openly three times: “I find no guilt in Him.” Yet, his actions don’t follow from that conviction. Scourging, crowning with thorns, mocking, and ultimately crucifixion, aren’t the way that innocent people are rewarded. Pilate knew the circumstances surrounding Jesus’ arrest; he knew Christ was innocent, and yet did nothing to aid Him. Knowledge without action is of no avail.

Lastly, we have Mary’s answer. John tells us that she stood by her Son’s cross, and saw Him in His agony. She didn’t mock Him, or refuse to believe. Nor did she run away, or do nothing. Rather, she “stood by Him,” sharing in His sorrow and suffering. We shouldn’t think that this was easy. The story is told that Blessed Henry Suso, a Dominican friar, once asked Mary to experience the sorrow our Blessed Mother felt on Calvary, and Mary simply replied, “My Child, you have no idea what you’re asking.” The saint insisted, however, the grace was granted, and he later recalled that darkness and grief so enveloped his soul that he was unable to eat or drink or sleep. He could say, as we read in the Book of Lamentations, that “he had [even] forgotten what happiness is” (3:17). So overwhelming and oppressive was his grief that Henry worried he would die from it, and so he cried out, asking for relief. At once Our Lady appeared, and he was restored. Turning to Mary, he told her, “Now, I understand what you experienced on Calvary.” At that, Mary looked sadder still, and replied, “My Child, what you felt was but a drop of what I felt on Calvary.”

To follow Christ, to really follow Him, means to embrace our sufferings, and to see them as a share of His cross, to become partakers in His sufferings, uniting them to His, so that we do might prolong the redemption and make it concrete here and now.

Mary gave her unconditional yes to God at the Annunciation, and now she aware of the price she must pay. When Christ was presented in the Temple, Mary was greeted with the prophecy: “Behold, this child is destined for the fall and rise of many in Israel, and to be a sign that will be contradicted, and you yourself a sword will pierce so that the thoughts of many hearts may be revealed.” That prophecy, which must have seemed vague at the time, now comes to completion.

Simeon’s prophecy refers to how the crowd’s response to Mary’s sufferings that rent her heart reveals their attitude towards Jesus Christ her Son. Although the Pharisees might have been indifferent to Jesus’ sufferings on the cross, they should at least have had compassion on His Mother. Their hardness towards her refers their indifference to God Himself.

As we remember Jesus Christ’s passion and death, and all the many sufferings he endured for our sake, we can meditate on what we are to celebrate. Those two attitudes, the worldly view, and the Christian one, are still very much present in our world and even in our own lives. Let us ask, through the intercession of Mary, Mother of Sorrows, for the grace to draw near to Her Son, to acknowledge and love Him and His sacrifice, and so out of love conform our lives to Him who, out of love for us, laid down His life.