Do you want to be healed? 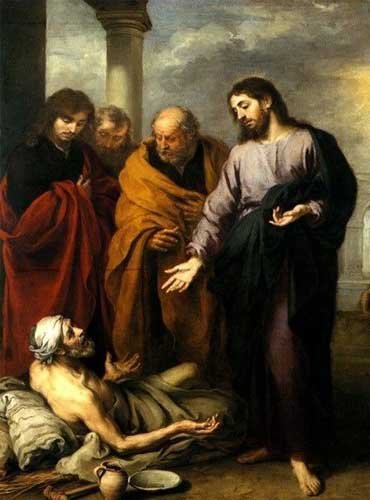 Today’s Gospel presents us with Christ in Jerusalem. As He passed by the pool called Bethesda, He caught sight of a man who had been lying there 38 years, and performs a miracle to help him. Although these is a lot that could be said, we can consider two points of particular importance for this Lent: perseverance in the midst of suffering, and the way we live our lives.
Regarding the first, Jesus asks the man an interesting question: “Do you want to be well?” It’s not as odd a question as it might first seem. After all, the man had been there waiting for 38 years, and if he couldn’t get into the pool when it was stirred up, he wouldn’t have been able to go anywhere else either. Maybe he was just sticking around because he had no choice. Yet, John tells us that Jesus saw him and “knew that he had been ill for a long time”; Jesus knew exactly what the man had suffered, and was prepared to make an end of it, right then and there. It should comfort us to know that God knows what we’ve suffered, and, if we wait and persevere in prayer, He will hear and answer us.
Regarding this, Saint John Chrysostom offers a beautiful commentary. He writes: “The perseverance of the paralytic was astonishing. He was thirty-eight years old, and each year he hoped to be freed from his disease. He lay there waiting, never giving up. If he had not persevered as much as he did, wouldn’t his future prospects, let alone the past, have been enough to discourage him from staying around that place? Consider how alert the other sick people there would be, since no one knew for sure when the waters would be troubled. The lame and the limping could observe it, but how could a blind man? Maybe he learned it from the clamor that arose. Let us be ashamed then, beloved, let us be ashamed and groan over out excessive laziness. That man had been waiting thirty-eight years without obtaining what he desired, and he still did not withdraw. And he failed, not through any carelessness of his own but through being oppressed and suffering violence from others. And still he did not give up. We . . . might persist in prayer for something for ten days or so, and if we have not obtained it, we are too lazy afterwards to employ the same energy [as he did]. And yet, we will wait forever on our fellow human beings, fighting and enduring hardships, performing menial labor, all for the chance of something that in the end fails to meet our expectations. But when it comes to our Master, from whom we are sure to obtain a reward greater than our labors . . . we exercise no such diligence in waiting on him. . . .  For even if we receive nothing from Him, isn’t the very fact that we are able to converse with Him continually the cause of ten thousand blessings?”[1] We can ask ourselves: do we really try to persevere in prayer, especially when it seems our prayers aren’t answered?
​
Regarding the second, elsewhere Saint John Chrysostom points out that the pool is a symbol of baptism; the water of the pool brought healing when it was stirred up by the angel, and the waters of baptism heal us when the power of the Holy Spirit descends on them. Like the man in the Gospel, by Christ’s power we have been healed, and we must proclaim this truth in the way we live our lives. Saint Ephrem the Syrian notes that Christ has the man carry his bed, to show that the healing was complete and perfect. “Even if [the man] were silent,” he writes, “his bed would cry out.”[2] As Lent continues, we can ask ourselves: how well are we living out our baptismal faith? Do we really show it in all our daily actions?
​
Through the intercession of Mary, Our Lady of Sorrows, let us ask for deep faith that we might persevere in prayer and show, with our lives, the healing we have received.
​[1] Homilies on the Gospel of John, 36. 1-2.