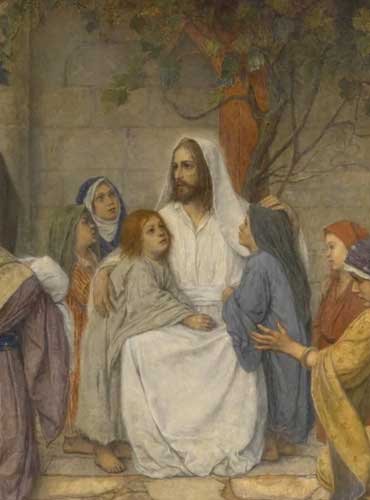 Today’s Gospel presents us well-known lessons regarding humility and our service of God. Following fathers and doctors of the Church, we can consider three parts of the Gospel, and see how they apply to our lives.[1] We can consider, first, the temptation to pride, second, the way Jesus remedies it, and, third, what is means to “receive a child.”

Regarding the first, the temptation to pride, Saint Cyril writes that “The devil lays plots of various kinds for them that love the best way of life. And if indeed by carnal allurements he can gain possession of a man’s heart, He sharpens his love of pleasure; but if a man has escaped these snares, he excites in him a desire of glory, and this passion for vain-glory had seized some one of His apostles.” The lesson here for us is that we, too, are tempted where we are weakest, as Saint Ignatius points out in the Spiritual Exercises. Just because we have overcome the more obvious vices, doesn’t mean that we are in the clear regarding temptations. We must always be on the lookout, and ready to uncover the wiles of the devil.

However, and this is our second point, Saint Cyril points out that Christ gets to the heart of the problem: “But our Lord, Who knew how to save, seeing in the hearts of the disciples the thought that had risen up thereupon as it were a certain root of bitterness, plucks it up by the roots before it received growth. For when passions first begin in us, they are easily subdued; but having gained strength, they are with difficulty eradicated.” Here, there is a wealth of wisdom for us. Jesus provides a permanent remedy. He could have simply said for them to stop arguing, or not to worry about it, but Christ does more: He gets to the heart of the problem and explains the need for humility, which is really at the root of the issue. Some commentators think the Apostles were jealous of the ones who had witnessed the Transfiguration, but, no matter the immediate cause, Jesus points out the need for humility. In our lives, too, the virtue of humility is one in which we can always grow, and one by which we avoid many sins and problems.

Thirdly, as Saint Bede points out, the “need to receive a child” could refer to two different actions on our part: as he says, “Now herein He either teaches, that the poor of Christ are to be received by those who wish to be greater simply for His honor, or He persuades men that they are children in malice.” Both loving the poor among us (and the poor can be taken broadly so as to include anyone who is lacking), and acknowledging that we ourselves are sinners help us to grow in humility and become childlike ourselves.

Today, we can consider how we live out humility in our lives. Through the intercession of Mary, Our Lady of Humility, and Saints Cosmas and Damian, we ask for the grace of humility so as to become children of our heavenly Father in word and in deed.

[1] As taken from Aquinas’ Catena Aurea on this text.