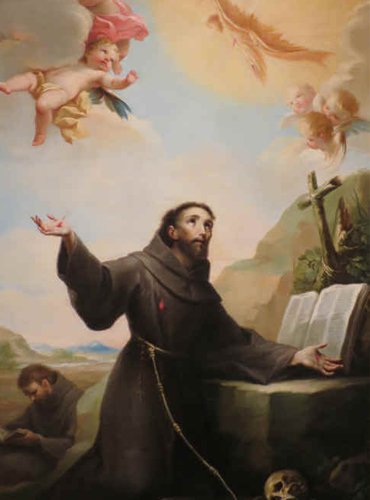 Memorial of Saint Francis of Assisi (Reading from Tuesday of the 27th Week in Ordinary Tim) – October 4th, 2022

Today’s Gospel presents us with the well-known incident of Mary and Martha. We’re reminded of how God calls us to give ourselves entirely to Him and, especially as active and often busy people, we need to be reminded how not to lose ourselves in the midst of our tasks. Let’s consider just two parts of the Gospel: what Martha did wrong, and what Jesus tells her.

Regarding the first, Luke tells us that Martha was “burdened with much serving.” The Greek word for “burdened” there literally means “to be drawn away or around.” In other words, instead of leading her to love God and her neighbor, her service led her away from Him. Jesus Christ must be the center of our hearts, our lives, and our works; our apostolic works must be centered on Him, but this is only possible through a spirit of recollection. As the Spanish saying would have it, Martha’s problems weren’t in el estar ocupada, sino en el estar preocupada. Martha’s problems weren’t in being occupied, but rather in being preoccupied.

Jesus’ response to Martha is very beautiful. First, notice that He repeats her name: Martha, Martha. It’s a special sign of extra tenderness and affection. In fact, Jesus only repeats a name only two other times in the Gospels: once to Simon Peter, and on the Cross, when He cries out Eloi, Eloi.[1] In these instances, the repeated names also drawn attention to what is being said, and highlight its importance.

Jesus then indicates the problems that result from her lack of recollection, two symptoms, we could say, of her lack of focus: “You are anxious and worried about many things.” Again, these words are very important. The Greek word here for anxious literally means a part separated from the whole. Figuratively, it refers to how being anxious about this world divides and fractures a person into parts.[2] We sort of capture this meaning when we say that someone who is overwhelmed by anxiety falls to pieces. Likewise, the word for worried means to make a great noise.[3] In the first book of Kings, we read that Elijah went and hid himself in a cave, waiting for the Lord to pass by: “There was a strong and violent wind rending the mountains and crushing rocks before the LORD—but the LORD was not in the wind; after the wind, an earthquake—but the LORD was not in the earthquake; after the earthquake, fire—but the LORD was not in the fire; after the fire, a light silent sound.” Other translations say, “a still, small voice.” In any event, God is not found in the noise, and He doesn’t speak amid noise. Those two symptoms are a good examination for us: if we’re anxious about things, it’s because our hearts aren’t entirely set on God. Perhaps part is there, but another part is not. We’re divided, and only in Christ can we unite everything. Likewise, if we find ourselves exploding into a fireball of emotions at small things, we’ve also forgotten how to listen to God’s voice. We’re creating problems for ourselves that can be easily avoided if we just remember the one thing necessary: to remain rooted in Jesus Christ, who is the same yesterday, today, and forever. We can remember the advice of The Soul of the Apostolate or, even more succinctly, the motto of the Carthusians: Stat crux dum volvitur orbis, “The Cross is steady while the world is turning.” Everything outside of Jesus and His Cross changes; only He remains forever, and to remain with Him in recollection and prayer to have the only thing necessary, nor matter what activities we might be engaged in.

Today, then, let us pray, through the intercession of Mary, Mother of Charity, and Saint Francis of Assisi, for the grace to be recollected in God’s service, and thus participate in His peace and tranquility.

[1] He also asks Paul, “Saul, Saul, why are you persecuting Me?” but that’s in the Acts of the Apostles.

[2] HELPS Word-studies 3309 merimnáō (from 3308 /mérimna, “a part, as opposed to the whole”) – properly, drawn in opposite directions; “divided into parts” (A. T. Robertson); (figuratively) “to go to pieces” because pulled apart (in different directions), like the force exerted by sinful anxiety (worry).