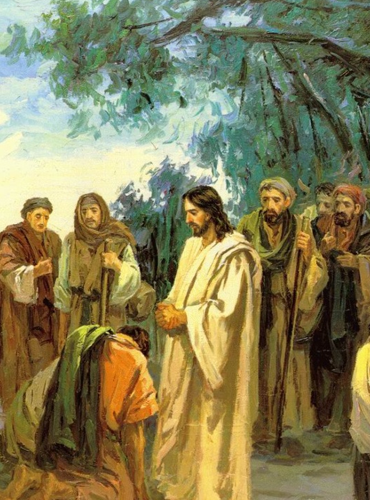 My dear brothers and sisters, today’s Gospel raises the question of thanksgiving. Jesus points out that it is very important and necessary to give thanks.

As He heads to Jerusalem, Christ meets a group of ten lepers. These, in obedience to the Law, are separated from the rest of society. Clearly they recognized Jesus, and had heard of His healing ability, because they cried out “Jesus, Master! Have pity on us!” Nonetheless, in the Old Testament, there are only two recording healings of lepers: Naaman, the Syrian, which we heard of in today’s first reading, and Miriam, Moses’ sister.

Rather than give them anything extraordinary to do, Jesus simply commands that they go to the priests. For the Israelites, leprosy was not just a physical disease; it was also an impurity, almost a sin, as it were, and so they are told to go to the ones who can declare them clean.

Realizing what had happened, only one comes back, and Luke tells us that he is a Samaritan. He is only this one who comes back and, because he gives thanks to Christ, Jesus gives him even more: “Your faith has saved you.”

So, how does this apply to us? When Saint Thomas Aquinas writes about being thankful, about the virtue of gratitude, he points out that to be grateful means doing three things: first, to recognize the favor received, the second to express one’s appreciation and thanks, and the third to repay the favor at a suitable place and time according to one’s means.[1] If we really want to give thanks, we must recognize what we’ve received, express our gratitude, and repay.

The first step in thanksgiving is to recognize what we’ve been given, what we’ve received. Oftentimes we can simply forget that absolutely everything we have is a gift: the simple fact that all of us are here today, celebrating this Sunday, is itself a gift from God, who gave us another day of life, and provided us with everything we need to get here.

This is the first thing that calls our attention in today’s Gospel. Jesus tells the lepers to show themselves to the priest. However, as their healing takes place, only one, the Samaritan, goes back to give thanks to God. It’s interesting that it’s not the Jewish lepers who return; the Jews had received grace after grace, and benefit after benefit from God. Their people had been the recipients of a particular love and blessing from God, and yet none of them return to give thanks. None of them realized what they had been given, probably because they hadn’t been paying much attention; consumed by suffering and illness, they had forgotten to give God thanks, and their ingratitude had become a habit.

If we think a little more about the Gospel, we’ll see another truth: none of the lepers gave thanks to God for their illness. That’s a hard lesson: oftentimes, we don’t think of suffering or the bad things that come our way as something we should give thanks to God for, but they are. The Samaritan was able to draw so close Christ, precisely and only because of his illness. Had he not been sick, he wouldn’t have needed anything from Jesus and, being a Samaritan, he would’ve avoided Him, since the Jews and Samaritans hated each other. Part of Christ’s plan for the Samaritan’s salvation was his illness. The leprosy, which everyone thought was a curse or a punishment, was the instrument God used to bring the Samaritan to Christ and to bring Him salvation. For months or years, the Samaritan had no idea; it was only in the fullness of time that God’s plan was revealed to him, a plan that made use of leprosy, something bad, to bring about something good.

This was the experience of Joseph as well. If you don’t remember the story, Joseph is Jacob’s beloved son, only because he is the son of Rachel. His brothers are jealous, they decide to kill him, but instead opt to sell him as a slave. So they do, and after a miserable time as a slave, he ends up as Potiphar’s slave, and ends up promoted to head of the household, only to be thrown in prison because of a false accusation from Potiphar’s wife. In prison he interprets dreams, and tells Pharaoh’s cup-bearer not to forget him, which he does, and only two years later does he remember. In Gn 50, his brothers are worried that he hasn’t forgotten the whole selling him into slavery thing, and so they go to him and ask forgiveness. In v. 20, he replies, in the NABRE version: “Even though you meant harm to me, God meant it for good.” It’s hard to translate that phrase well. That verb meant literally means to weave or to plait, which perhaps captures better the interconnectedness of what seems like just random acts of violence and anger, or just plain bad luck on Joseph’s part. Our lives are a tapestry that God weaves and re-writes to bring us salvation. Our task is to see even these things, these difficult moments, with the eyes of faith. If we get bitter or angry, then we won’t be able to be thankful; we won’t appreciate how God wants to give us good gifts through them.

Our thanksgiving, our giving thanks to God, then, must be a constant attitude, because God’s love is always pouring out the gifts and graces that we need to become saints; if we give thanks whenever someone gives us a gift, then how much more should we be constantly giving thanks to God.

This leads to our second and third actions: we need to express our gratitude, and repay. How do we express our thankfulness to God? This is the question asked by Psalm 116: “How can I repay the LORD for all the great good done for me? I will raise the cup of salvation and call on the name of the LORD. I will pay my vows to the LORD in the presence of all his people.” We express our gratitude by prayer, by praising and thanking God as the Samaritan did. We repay the blessings we have received by living lives full of gratitude, which means living out the Commandments He has given us, and teaching others to love and serve God. We do this mostly by example, by showing our love and gratitude for all the many things that have come our way, no matter how they might appear to human eyes, and giving praise and glory to God at all times. This is truly the spirit that we should have.

Today, and every day, through the intercession of Mary, Cause of Our Joy, let us give thanks to God, for His love and His mercy endure forever, and He is constantly pouring out His blessings upon us.