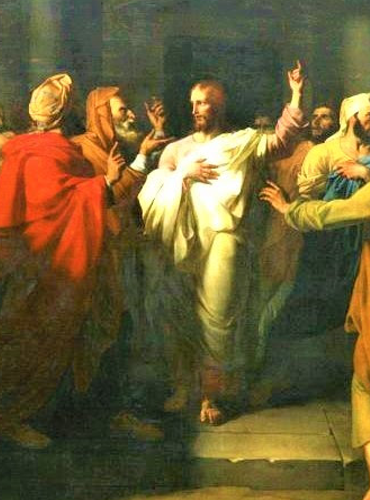 In today’s Gospel Jesus continues His strong rebukes of the scribes and Pharisees, and today’s passage is extremely dense with references to Jewish history and symbolism. We can consider just two parts of what Christ says: first, the reference to the prophets and their memorials, and, second, the key of knowledge.

First, Christ tells the scribes and Pharisees: “Woe to you who build the memorials of the prophets whom your fathers killed. Consequently, you bear witness and give consent to the deeds of your ancestors, for they killed them and you do the building.” Throughout Biblical history, past generations killed prophets when God sent them to His people; the generation present in Christ’s time builds up memorials to them, and, in so doing, recognizes that they were good and holy people and that their ancestors were wrong to kill them. However, as Christ points out, they will do exactly the same thing: they will kill the One who sent the prophets, the Lord of them all and the Prince of Life. After that, they will kill Stephen, and many others as well. In other words, they might claim to be different than those who preceded them, but, in reality, they will do the same thing: kill the ones sent by God to witness to His people. Indeed, some fathers of the Church point out that in the Old Testament, Abel was the first martyr, as it were, and Zechariah the last. In the New Testament, Christ is the archetype of martyrs, and the line of those after Him will continue until the end of time. In building and condemning their ancestors, the Pharisees condemn themselves.

Secondly, Christ tells the scholars of the law: “Woe to you, scholars of the law! You have taken away the key of knowledge.” The saints and fathers of the Church have interpreted this passage in a number of ways: for instance, Saint Ephrem writes: “Woe to you, lawyers, because you have hidden the keys! That is, because they had hidden the knowledge of our Lord’s manifestation which was in the prophecies. If our Lord is the door, as He has said, it is clear that the keys of knowledge belong to Him.” Likewise, Saint Maximus of Turin says that “This key is Christ the Lord, by whom the hidden places of our hearts are unlocked to believing faith. The Pharisees lost this key, and the apostles found it.”

So, what does this mean for us? On the one hand, we’re reminded that our actions need to correspond with our words. How often it happens that, while we complain about what others say or do, we do the same thing ourselves! Oftentimes the very vices we see in others are like a mirror, reflecting back on ourselves.

On the other hand, we’re reminded that faith in Christ is what unlocks the doors of our hearts and allows us to see ourselves as we are and thus follow Him as we ought. We can ask ourselves: what are the things that we notice and complain about in others? Are they the same things that we ourselves do or have? Have we asked Jesus to help us to overcome these flaws, and to open to us the doors of knowledge of Him and of His mercy and love for us?

Today, let us pray, through the intercession of Mary, Queen of Heaven and Earth, for the grace to really love Jesus Christ and to show it in the way that we live.