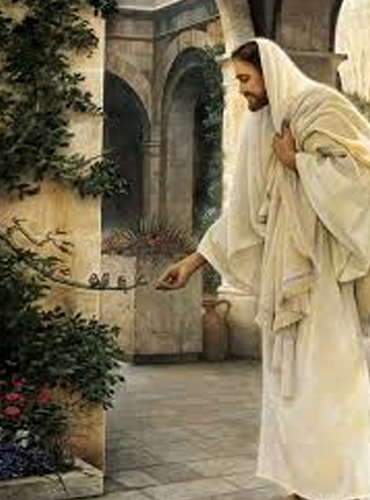 In today’s Gospel, Jesus continues to speak against the Pharisees, but this time His words are meant only for His disciples. At one point, the discussion shifts to speak of fear, and Jesus’ words seem rather surprising: “I shall show you whom to fear. Be afraid of the one who after killing has the power to cast into Gehenna; yes, I tell you, be afraid of that one.” The Greek ἐξουσία, the word for power, could also be translated as authority, moral authority, or privilege, and it’s clear that it’s not our persecutors, or even the devil, who has the authority to cast us into hell. No, as Saint Ambrose makes clear: “God alone is to be feared, whose power nature cannot contain, but rather is herself subject to [Him].”[1] Yet, Jesus immediately follows it by adding, “Are not five sparrows sold for two small coins? Yet not one of them has escaped the notice of God. Even the hairs of your head have all been counted.”

Here we see rather clearly the distinction between two sorts of fear. The first, servile fear, is the sort of fear that we have of offending God because we dread His punishment. We don’t want to be sent down to the fiery abyss, and often when we set out on our spiritual journeys, this is the first experience we have of God. As the Catechism tells us, it is a possibility that we could “remain separated from [God] forever by our own free choice. This state of definitive self-exclusion from communion with God and the blessed is called ‘hell’” (1033).

Yet, Jesus doesn’t leave things there. He presents a second sort of fear, filial fear, which means to fear offending God in the same way that a child fears offending his father or mother. In other words, the child doesn’t offend his parents, not to avoid punishment, but rather because he loves them, and it pains him to see them hurt by his offensive actions.

Such a fear is based on love, and we can pass to this sort of fear when we come to understand how much God loves us, and that He wants the best for us. He wants us to get to heaven; He doesn’t want us to go to hell! God’s love and care for us is seen in a beautiful detail. When Matthew reports this saying of Jesus, he writes: “Are not two sparrows sold for a small coin?” (10:29). That small coin is the ἀσσάριον (assarion), worth one-tenth of a drachma; there’s debate about how much a drachma was worth, but scholars think it would be about 17 cents in our day. Notice, however, that Luke recounts the saying differently, as: “Are not five sparrows sold for two small coins?,” that is, five birds for two ἀσσάριον (assarion). The probable reason for this, say Biblical scholars, is that these were actual market prices. In order to encourage people to buy the sparrows, which weren’t even worth ten cents a piece, there would be a bargain: buy four, get one free. Even that fifth sparrow, that has no monetary value whatsoever, that’s just extra, thrown in as part of the bargain, even that one “does not escape the notice of God,” or “is not forgotten.” That word, forgotten, is ἐπιλανθάνομαι (epilanthanomai) in Greek, and it emphasizes, not simply the mental aspect, but rather the effects that follow from it.[2] God doesn’t forget us; on the contrary, our lives are constantly marked by His providence, which is the most constant and concrete expression of His love. He knows what we need, and will provide it so we can reach heaven.

Today, let us pray for the grace, through the intercession of Mary, our Mother, and Pope Saint Callistus, to grow in our understanding of God’s loving concern for us as His children, so as to be able to love and fear Him as we ought.

[1] Cited in the Catena Aurea.

[2] HELPS Word-studies: 1950 epilanthánomai (from 1909 /epí, “on, fitting” and 2990 /lanthánō, “unnoticed”) – properly, to overlook, especially the effects that go with failing to notice. 1950 /epilanthánomai (“overlooking”), as an intensification of 2990 (lanthánō), focuses on the consequences that build on the forgetting (note the epi, “upon”).