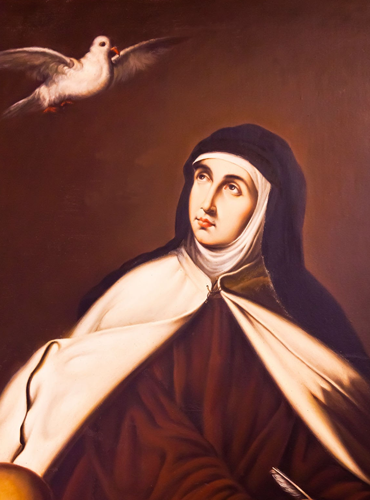 Today’s Gospel is only five verses, but there is a lot of food for thought here. In fact, we could divide this Gospel into three sections: the first regarding the acknowledge or rejection of Jesus, the second regarding the unforgiveable sin of blasphemy against the Holy Spirit, and the third about the help of the Holy Spirit.

Regarding the first, the acknowledgement or rejection of Jesus in front of others, we should remember that in yesterday’s Gospel Jesus warned His listeners that “There is nothing concealed that will not be revealed, nor secret that will not be known. Therefore, whatever you have said in the darkness will be heard in the light, and what you have whispered behind closed doors will be proclaimed on the housetops.” However, as a commentary attributed to Saint John Chrysostom points out, this doesn’t mean that we can simply keep our faith as something private and personal. Rather, as the commentary says, “The Lord is not then content with an inward faith, but requires an outward confession, urging us to confidence and greater love. And since this is useful for all, He speaks generally, saying, Everyone who acknowledges me before others.” Our faith must be displayed outwardly; it has to permeate every action and thought, our jobs, our families, everything. We can ask ourselves: how well are we “acknowledging Jesus Christ before others,” both strangers and people we know and live with?

Regarding the second, the unforgiveable sin, there is often confusion about what Jesus means. After all, doesn’t Jesus forgive all sins? Isn’t He “love and mercy itself”? However, over 1500 years ago Saint Augustine already gave an excellent explanation of what this sin is. He writes: “Now what that kind of blasphemy against the Holy Spirit is, let us see. The first blessing of believers is forgiveness of sins in the Holy Spirit. Against this free gift the impenitent heart speaks. Impenitence itself therefore is blasphemy against the Spirit, which is neither forgiven in this world, nor in that which is to come; for repentance gains that forgiveness in this world which is to avail in the world to come.” In other words, Augustine says that the “unforgiveable sin” is impenitence, meaning, the refusal to be forgiven by God. God’s forgiveness is a gift, and so, if we reject that, then there’s nothing God can do. He can beg, plead, send grace after grace, but that final refusal to repent is a free decision on man’s part, and God can’t pardon what man, in his abuse of freedom, stubbornly refuses to let God forgive. Like a doctor who can’t treat an injury the patient refuses to show, God can’t forgive the one who refuses to show the wounds of His sins. In much the same thought, Saint Bede writes that sometimes the “unforgiveable sin” is considered to be the attribution the works of God to the devil. However, he explains this in much the same way that Augustine does: “Not that we deny that if [the sinner] could come to repentance he could be forgiven by God, but that we believe that such a blasphemer as by the necessity of his deserts he would never come to forgiveness, so neither to the fruits themselves of a worthy repentance.” In other words, the one who attributes God’s works to the devil is unforgiveable, not because God can’t forgive Him, as if the sin were too great for God’s mercy, but rather because the sinner needs the grace of the Holy Spirit to repent, and that is precisely what he rejects.

This might seem very removed from our lives, but we should remember that every small act of unforgiveness, every grudge we hold, slowly hardens our heart if we’re not careful and refuse to take the time to forgive. All those little sins set us up for a final, big sin, which is that of refusing to ask God for forgiveness. After all, this is the condition that Jesus sets for us to be forgiven: “If you forgive others their transgressions, your heavenly Father will forgive you. But if you do not forgive others, neither will your Father forgive your transgressions” (Mt 6:14-15). We can ask ourselves: are we holding any grudges? Do we refuse to forgive others? Do we realize that this means to refuse forgiveness for ourselves?

Lastly, Jesus provides some words of assurance to His listeners, telling them that the Holy Spirit will come to their aid so they can bear witness to Him. As one Church father puts it, “Since then our weakness is twofold, and either from fear of punishment we shun martyrdom, or because we are ignorant and cannot give a reason of our faith, [Jesus] has excluded both; the fear of punishment [He answered when] He said, Fear not them which kill the body, [and] the fear of ignorance, when He said, Take no thought how or what you shall answer.” We can see this great truth manifested in the lives of the saints; we can think of the example of the illiterate Saint Joan of Arc, who famously replied, when asked during her trial the impossible question if she knew herself to be in a state of grace, “If I am not, may God put me there; and if I am, may God so keep me.” Her captors, including bishops, priests, and theologians, tried for days to trap this young peasant girl into saying something heretical, and ultimately, they failed. This is the greatness of the Holy Spirit’s influence and aid. Do we trust in Christ’s promise and in the aid of the Holy Spirit? Do we trust God enough to believe that He will come to our aid when we need it?

Today, let us pray for the grace, through the intercession of Mary, Mother of the Word Incarnate, and Saint Teresa of Jesus, for the grace to bear witness to Christ in our daily lives, to forgive others, and to trust in the Holy Spirit’s help in our lives.