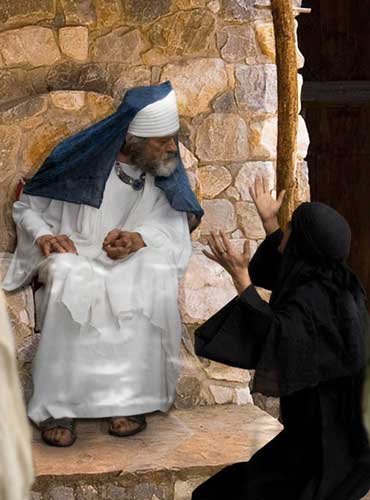 Dear brothers and sisters, today, as in the past weeks, the Church presents with us the words of Our Lord about the importance of faith, the importance, as St. Luke tells us directly, “to pray always without becoming weary.”

Really, all the readings of today speak to us of a persevering faith, a constant faith, in spite of the difficulties or when faced with a delayed response from God.

In the first reading, we heard how Israel won when Moses had his arms raised. In Hebrew, the word faith literally means firmness. In fact, when we heard in verse twelve that, with the help of Aaron and Hur, “his hands [meaning, Moses’] remained steady till sunset. stood firm until sunset,” literally says “his arms remained firm,” or “his arms kept the faith.”

This image of Moses looking at the battlefield with his faithful arms can help us understand the most harmful difficulties against faith. Watching the battle, it was not the dead that made him tremble, or the screams, or the smells, or the sounds, that made his arms fall: he dropped his arms simply because he was tired. It is the fatigue that, so to speak, weakened his faith, and that even with the full vision of the consequences of such loss. Today, maybe the fight and the consequences are not so clear. As St. Paul says in his letter to the Ephesians (6:12): “Our struggle is not with flesh and blood but with the principalities, with the powers, with the world rulers of this present darkness, with the evil spirits in the heavens.” If the enemies are so hard to see, the consequences of losing faith are hard to see too. However, if we look closely at our world, the consequences are quite clear: violence, unbridled pursuit of pleasure, money, superficial contact with others, and, more than anything, this feeling of anxiety and anguish because we don’t know what will happen in the future.

In the second reading, taken from Saint Paul’s second letter to Timothy, the Apostle to the Gentiles says: “Remain faithful to what you have learned and believed, because you know from whom you learned it.” The context must be remembered: St. Paul speaks of all the persecutions he has suffered, and that Timothy will have to suffer, just because he is a Christian and a follower of Christ. The two verses before today’s reading say: “In fact, all who want to live religiously in Christ Jesus will be persecuted. But wicked people and charlatans will go from bad to worse, deceivers and deceived. But you remain faithful.” That is, despite the difficulties, despite the problems, we must remain faithful, because we know that what we believe is what we have received by the Apostles and, therefore, from Jesus, from God Himself.

In the Gospel, Christ uses a parable to explain that we must have a persevering faith, but many times we don’t pay attention to the very specific motive he gives for it.

We have to see three things: first, the historical context of the parable, second, the reason why Jesus says that we should always pray without being discouraged, and, third, suggestions to put into practice what the Lord says.

First, we have to understand the historical context of the parable, because those who heard Jesus already had the context, and we don’t. First, the unjust judge was not Jewish. That is certain, because, according to the law of Moses, all normal, everyday matters were not resolved in a court with judges, but in front of an old man respected by the community and who was responsible for resolving those cases. Then, the matter was something rather than civil law, perhaps something against one who wasn’t Jewish, and in that case the court always had three judges: one appointed by the plaintiff, another by the accused, and the last by power civil, that is, or by Herod or by the Romans. These judges were known for their injustice, since they always asked for money, that is, a bribe, to do justice. A poor man could not pay; then, despite the justice of his cause, he could never receive what he asked for.

Then, the widow, who represents all the poor and the powerless, began to annoy the judge with great insistence and finally yielded what the widow requested. The word the judge uses to describe what the widow does literally means “to give someone a black eye.” The phrase is strong, and so the judge clearly understands the strength of the widow’s insistence so much so that she finally got what she was looking for. That would have been almost a miracle, for the reasons already mentioned.

Now, Jesus takes the parable and applies it to us, saying: “Pay attention to what the dishonest judge says. Will not God then secure the rights of his chosen ones who call out to him day and night? Will he be slow to answer them? I tell you, he will see to it that justice is done for them speedily.” For whom will God do justice? For His chosen ones, that is, for us. And, although it may sound like a strange question, why are we chosen? Well, because God has chosen us, He has chosen us, and the word in Greek always implies a very personal choice on the part of Him who chooses. God has chosen us to be His beloved children, and that is why we must have faith in Him. He is our heavenly father. There is the key and the reason for our trust.

So, in the practical realm, there are two things we have to do. The first is quite obvious, because Luke says so: we have to always pray without being discouraged. As the prophet Isaiah said (62, 6-7): “You who are to remind the LORD, take no rest, and give him no rest, until he re-establishes Jerusalem.” We must pray, and keep praying. “The Lord does not delay his promise,” as St. Peter says (2 Pt 3:6) “as some regard delay.” We must trust.

But, that is impossible if we do not trust that God is our father who has loved us with a special love. That is the greatest obstacle in today’s spiritual life, be it the life of a priest, a nun, or a layman. We do not understand what it means to be a father, neither on the natural plane, nor on the divine plane. What a father does: we highlight some things.

2º A father is someone who forgets himself to attend to the good of his son: My little children! For you I suffer again labor pains, until I see Christ formed in you (Gal 4:19), said St. Paul.

3º A father is someone who sympathizes and acts with mercy in regard to the son: Be merciful as your Father is merciful (Lk 6:36).

5th A father is someone who corrects and educates those who love: “Endure your trials as “discipline”; God treats you as sons. For what “son” is there whom his father does not discipline? If you are without discipline, in which all have shared, you are not sons” (Heb 12: 7-8).

6th A father is someone who defends the life of the Son, especially the spiritual life: When I was with them, I took care in your name of those you had given me. I have watched over them and none have been lost … (Jn 17, 12).

7th A father is someone who always observes and listens to everything that refers to his son, but speaks and rebukes only when prudence requires it: What were you arguing along the way? (Mk 9, 33); Simon, I have something to tell you (Lk 7, 40).

9th A father is someone who gives without counting the cost, who does not demand the effectiveness of an employee, but the company of a friend: I do not call you servants … I have called you friends, because everything I have heard My Father has made it known to you (Jn 15:15. Father, they are your gift to me. I wish that where I am they also may be with me, (Jn 17:24).

That is why we must always pray and not get tired. We have a Father in heaven who loves us so much that He sent us His own Son to die for us.

Let us ask Mary Most Holy, Model of Prayer and Our Mother, to obtain the grace to always pray, despite the difficulties, and the grace to trust and love God as a father.