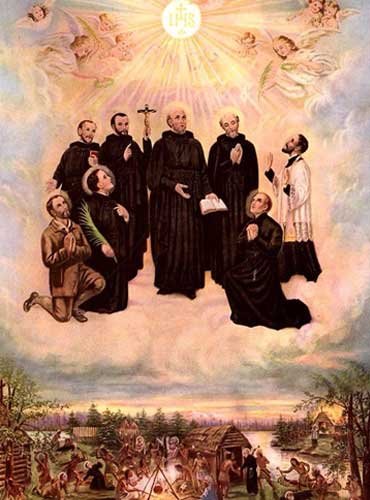 Saint Gabriel Lalemant was inspired to offer himself for the missions because of his uncle, Father Jerome Lalemant, who was the Jesuit superior of the Canadian missions.[4] Yet, Lalement’s health was always poor; reporting his death, the Jesuit superior wrote that Lalemant’s had been a “very delicate constitution, and [it was a] fact that his body had no strength except what the spirit of God and the desire of suffering for his name could give him.”[5] Nevertheless, Lalemant offered himself wholeheartedly to the mission, but his uncle still had to be careful in assigning him to missions. Lalemant quickly picked up the language, but, after a mere six months, he was martyred along with John de Brébeuf. As weak as his body might have been, Lalemant endured torture for 15 hours, while de Brébeuf died after three. Lalemant accepted his mission, as well as his physical limitations, as coming from God. Ultimately, his poor health had no impact on his ability to serve in the missions, since he wasn’t there long. It recalls the wise words of Saint Ignatius. Before his perpetual vows, he was tempted by the question, “Will you really be able to do this for the rest of your life?” Ignatius replied, “Can you give me even one more day of life?” Our lives are entirely in God’s hands.

Saint Noel Chabanel taught for years at the Rodez College for the Jesuits, and was known as a brilliant theologian. Yet he felt called to the missions in North America, and twice requested to be sent overseas. Finally, after his ordination, he was sent but, in spite of his brilliant intellect, he couldn’t learn the language.[6] He struggled five long years without success, and, as a biographer wrote, “he detested Indian life: the smoke, the vermin, the filthy food, the impossibility of privacy,”[7] all which made study almost impossible. To make matters worse, the natives would humiliate this brilliant man, laughing at how poorly he spoke.[8] At this point, Chabanel felt tempted to ask to be recalled from the mission. However, he did two things instead: first, he professed a perpetual vow to remain in the mission until death, the classic Ignatian agere in contra. Secondly, since he was limited in his other abilities, Chabanel became the servant of all, “humbly performing everything that the other missionaries commanded him.”[9]

God knows exactly what we need to become saints; we just have to accept it. Let us ask for this grace through the intercession of the North American martyrs and Our Lady, Queen of Martyrs.

[7] Parkman, Francis. Francis Parkman’s Works: The Jesuits in North America in the seventeenth century, 195. See p. 235 in this book for the vow formula.