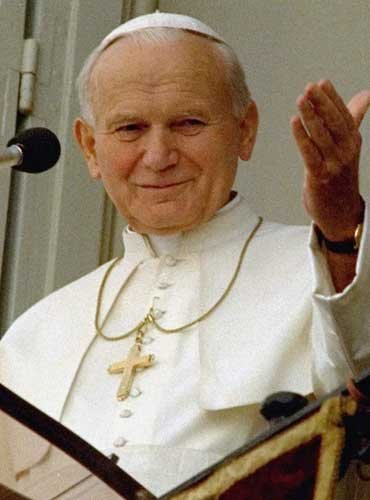 Today, we celebrate the feast of Saint John Paul the Second. As we know, his feast falls on October 22nd, which is the day that he began his Petrine ministry. However, he had actually been elected the week before, on the evening of October 16th. The question arises, then: what did John Paul II do for that week in between being elected and officially starting his work as Pope?

On one hand, we know what he did: he went to visit his friend, the Polish bishop Andrzej Deskur, who had suffered a stroke before the conclave. In fact, then-Cardinal Wojtyla had to be pulled away from Deskur’s bedside in order to enter the conclave. Likewise, the Pope had an informal dinner with several of his Polish friends. As was tradition, he would’ve celebrated Mass in the crypt of Saint Peter’s three days after his election. Certainly, too, he spent a great deal of time in prayer. In short, we could say it was a time of preparation before that glorious moment on October 22nd when the first Slavic pope would famously proclaim, “Brothers and sisters, do not be afraid to welcome Christ and accept his power. Help the Pope and all those who wish to serve Christ and with Christ’s power to serve the human person and the whole of mankind. Do not be afraid. Open wide the doors for Christ.”

However, we would be wrong to think that preparation for becoming Pope was the work of one week. It’s true that God gives us the grace when we have need of it, but John Paul II prepared himself for becoming Pope throughout his entire life, by living at every moment in obedience to God and to His will and providence. John Paul’s preparation for becoming pope was a constant attitude of seeking to find and do God’s will. In fact, the same Cardinal Deskur recalls that in the diocesan seminary, when he and the future Pontiff were studying, someone wrote on John Paul’s door, “Karol Wojtyla: future saint.” It wasn’t meant as a joke, but rather in all seriousness: Karol Wojtyla was a man seeking and striving after holiness, and he did so day in and day out.

It is in this context that we can apply the words in the Gospel that we’ve been hearing all this week about the need to be prepared for Christ’s coming, and how He came to set the world ablaze. Yesterday we heard “You also must be prepared, for at an hour you do not expect, the Son of Man will come.” Oftentimes we think that this means when we die or when Christ comes at the end of time, and this is certainly one meaning. However, we must remember that Christ comes to us every day: He comes in the form of our superiors, our friends, our families, our communities, our co-workers, in His providence, and even in sufferings and difficulties. It is through these things that Christ “sets the world on fire” with love for Him, this daily surrender and living in the presence of God.

Today, through the intercession of Mary Most Holy and Saint John Paul II, let us ask for the grace to live constantly in the presence of God, and thus be ready at all times to receive His visits to us.