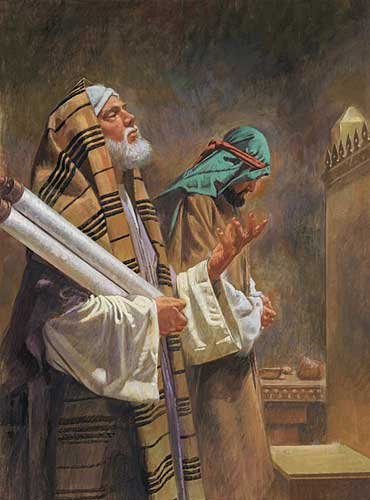 Dear brothers and sisters, today the Church presents us with Our Lord’s words about the importance of humility and its intimate connection with prayer.

Humility is one of the most important and fundamental virtues in the spiritual life. According to one tradition, Saint Bernard was once asked what the three most important virtues were, and he replied, “The first is humility, and the second, humility, and the third, humility.” So, in order to understand what humility is and learn to practice it in our lives, we can consider three points: first, the introduction that the evangelist makes, second, what the Pharisee and the publican do, and third, what we must do to reach humility.

First, we have to consider the context of the parable. As an introduction, St. Luke gives us the words: “Jesus addressed this parable to those who were convinced of their own righteousness and despised everyone else.” The parable before this one, which we heard last week, was addressed to his disciples, and before that, in chapter 17, Jesus spoke with his disciples. It makes us understand, then, that the “those” to whom Jesus told His parable at least include some of his disciples, so we have to pay attention and really examine ourselves to see if we are humble or not.

And what do these disciples do? Saint Luke indicates two things: first, “they were convinced of their own righteousness” and second “they despised everyone else.” “They considered themselves just” or, more literally, “they were convinced that they were just.” With that, we understand that they really were not fair or good at all, but were, in fact, confused. Already with this, Saint Luke enlightens us with the first requirement to be humble, and is to know ourselves. The great Saint Augustine very often prayed: “Lord, let me know myself and know You.” “Lord, let me know myself and know You.”

Saint Teresa of Jesus said that humility is nothing other than “walking in the truth,” and walking in the truth means knowing ourselves. This implies, on the one hand, knowing our miseries, our sins, our defects. The word humility comes from the Latin humus, which means earth or dust. Our father Adam was made from the dust of the earth, and we, his descendants, are also dust, as the liturgy of Ash Wednesday reminds us: “Remember that you are dust and to dust you will return.”

At the same time, humility requires that we recognize our talents, gifts, and thanks that we have received. To deny that we have talents is not humility. However, we cannot boast in those things, as if it were my own. If I do good works, it is because Jesus works in me, as Jesus says at the last supper: “Without me, you can do nothing.” If I have something specific gift, it is because God has given it to me, as Saint Paul says: “What do you have that you have not received? And if you have received it, why do you boast as if you had not received it?” (1Cor 4, 7). Everything we have is a gift from God; It is not something that belongs to me. Talents are like the talents in the gospel according to Saint Matthew: they are lent me so that I can earn something for God with them.

The second vice in which these people fall is to “despise others.” If they appreciate themselves too much, it is natural that they come to despite or reject others. Their intellects are already blind, that is, their minds do not let them see reality, and that blindness passes to the will as well: in other words, because they don’t understand aright, they do not act well. Their lack of knowledge becomes bad actions.

Already with that, we can see more clearly the effects of pride and humility in the prayers of the two characters in the parable.

The devout Jews went to the Temple three times a day to pray. The Pharisee doesn’t really pray to God; he prays to himself, and simply wants to inform God of how great he himself is. His eyes are fixed on the sins of others, and, from what he says, we can see clearly that his understanding has been darkened: “I am not like the rest of humanity — greedy, dishonest, adulterous.” And how does he know what other men are like? In judging others, he judges himself. Being proud is like putting on sunglasses: it distorts everything we see. That is why pride is so deadly for the spiritual life: if we don’t realize our need for God, we won’t ask for help and grace. If we don’t ask for help, we won’t receive it, and if we don’t receive it, we won’t be saved.

Knowing ourselves means knowing our defects and our miseries, because that is how we realize how little we are. We also have to recognize how weak we are and how easily we fall into sin. We must also recognize our talents and gifts, but always in the light of the greatness of God who has given them to serve him.

Knowing God means that we recognize that all the good we have is borrowed from you, and to realize your greatness and love. We also have to act accordingly, as the tax collector did. In a letter to one of his spiritual daughters, St. Padre Pio gives six practical pieces of advice:

“1. You must never be pleased with yourself;

2. You must never resent offenses, no matter where they come from;

3. You must excuse everyone with Christian charity;

4. You must always cry and beg God like a poor beggar;

5. You must not marvel at all about your weaknesses, but, recognizing yourself as the one you are, you will be ashamed of your inconstancy and infidelity to God, and in Him you will trust, leaving you quietly in the arms of the heavenly Father, like a child in the arms of his own mother;

6. You must not exalt yourself at all in your virtues, but you will refer that everything [comes] from God and gives Him the honor and glory.”

As Saint Mother Teresa of Calcutta said: “Mary’s greatness lies in her humility. Jesus, who lived in close contact with her, seemed to want us to learn from Him and her only one lesson: to be meek and humble of heart.” Let us ask, then, through the intercession Mary Most Holy, the Model of Humility, for grace of knowing ourselves and God, so that we always live in humility.