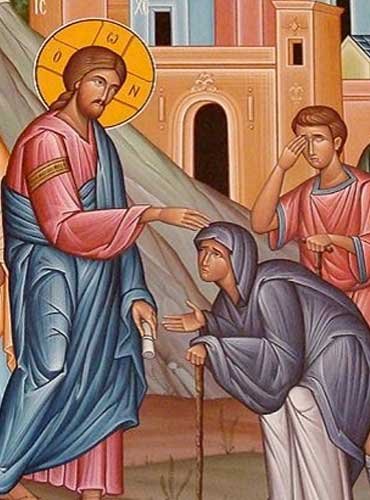 October 24th, 2022 – Monday of the Thirtieth Week in Ordinary Time

There are three details that call our attention about today’s Gospel: the first two tell us what it means to really be a child of God and the third, what it means to be a child of darkness. First, we’re told that the crippled woman had been afflicted for 18 years, and yet, there she was in the synagogue, praising God week after week. In spite of her suffering, she continually turned to God rather than become bitter and resentful, and we know this because immediately after she is healed, she glorifies God. There must have been a great deal of trust in her soul to come week after week, regardless of the seeming silence on God’s part.

Secondly, Luke gives us three distinct actions of Jesus with regard to the woman. First, He sees her, then, secondly, He calls to her. The Greek word can also mean to summon or call to oneself, and Luke seems to imply that the woman had to make her way to Jesus so He could lay hands on her, the third action. This, too, implies a great deal of trust and humility, as it meant being obedient and exposed to the sight of everyone gathered in that place, when she would have probably preferred to remain tucked away in a corner. Imagine her embarrassment had Jesus not actually healed her, or if He had failed. Heedless of any temptation to the contrary, the woman, perhaps her heart having learned patient trust in those eighteen years, simply goes to Jesus.[1]

This, of course, does nothing to win over the leader. Yet, because he can’t do anything against Jesus, who just healed a woman, he instead turns his fury on the crowds, our third detail. Notice that Luke tells us “But the leader of the synagogue, indignant that Jesus had cured on the sabbath, said to the crowd in reply,” and proceeds to rebuke, not Jesus, but the crowds who were simply there, doing what devout Jews did on the Sabbath, namely, go to the synagogue. To this, Jesus replies with a beautiful comparison which is clearer in the Greek, since the words for “untie” and “set free” are the same. Rather than see the hand of God at work, the leader turns away in anger.

For us in our lives, time and time again, we need to remind ourselves of what Saint Paul says in the first reading: “Those who are led by the Spirit of God are sons of God. For you did not receive a spirit of slavery to fall back into fear, but you received a spirit of adoption, through which we cry, ‘Abba, Father!’ The Spirit himself bears witness with our spirit that we are children of God.” We are God’s beloved children, and we will be good fathers, mothers, and sisters in the measure that we are good sons and daughters of our Heavenly Father. That love is sacrificial; it means making sacrifices, and giving ourselves entirely to God and His service: this is precisely what Saint Paul says, namely, that if we are children, we are heirs, but only “if we suffer with him.” That is what beloved children do, because they follow the example of the Beloved Father.

Let us ask, through the intercession of Mary, Daughter of Zion, and Saint Anthony Mary Claret, for the grace to truly be imitators of God and beloved sons and daughters of the Heavenly Father.