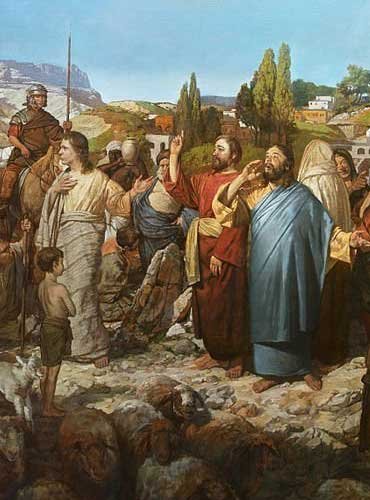 Saturday of the Thirtieth Week in Ordinary Time

As today is Saturday, the day dedicated to the Blessed Virgin Mary, and next week is the Solemnity of All Saints, it is good to take some time to consider one of Mary’s titles that relates both themes: Mary is called Queen of All Saints. Let’s consider, first, the history of this title, second, the theological reasoning behind it, and, third, what it means for us.

The devotion to Mary as Queen of All Saints can be traced at least back to the early Middle Ages, as there are devotional and liturgical texts from that time that refer to her under this title. The title has not waned in popularity and has even been hailed by the popes: for instance, when Pope Pius VII was a prisoner in France, he made a vow that if he were released, he would give the statue of Our Lady of Loreto a golden crown. In fact, He was freed, and fulfilled his vow with great solemnity on May 13th, 1814, and, interestingly, he greeted Mary as “Queen of All Saints.” Likewise, in 1954, Pope Pius XII originally set aside May 31st as the feast of the Queenship of Mary. Later, the Second Vatican Council chose August 22nd as the date to commemorate Mary specifically under the title “Queen of All Saints” as a way to continue the celebration of Mary’s Assumption.

The theological reasons for this devotion, our second point, are quite clear. Mary is sometimes called the moon among lesser stars (“Velut inter stellas luna minores” in Latin). In other words, she is the greatest among lesser saints, meaning, anyone under Jesus, because she exceeds all other saints in holiness.

Indeed, as one scholar notes, “Mary is called the Queen of All Saints because she made the most diligent use of the rich treasure of grace given to her by God and excelled in every virtue much more than every other saint.  All the traits of Jesus were expressed in her as faithfully as they could be expressed in any creature. As she surpasses all saints in choosing a virtuous and meritorious life, so Mary stands higher than all the faithful in receiving glory and reward. After God there is no greater bliss for the blessed in heaven than to behold her, their glorious Queen. The saints know that well enough. They did not have to reach Heaven to discover that. They realized it on earth, and that is why they are in Heaven today. The saints have been Mary’s greatest glorifiers. Their holiness began when they recognized Her supreme holiness. St. Teresa of Avila, for example, set out on the high road to sanctity the day she chose Mary for her Mother after her own earthly mother had died. The Little Flower abandoned herself to sanctity that day when as a child, thought to be dying, she begged Our Lady to have pity on her, and Our Lady answered Her by smiling upon Her. ‘The expression of Our Lady’s face was ineffably sweet, tender and compassionate; but what touched me to the very depths of my soul was Her glorious smile.’” Likewise, it is said that as a child Saint Catherine of Siena used to pause to say a Hail Mary on every step she would go up. In short, “in the life of every saint you will find a solid devotion to the Mother of God.”

This leads directly into our third point: how this affects our lives. Mary is the Model of Holiness, because she shows us how to live holy lives. At the same time, she is the Mediatrix of the graces we need to reach to heaven. In order to reach heaven, we need to honor Mary, to ask her intercession in order to be able to reach eternal happiness with her and her divine Son.

Let us ask through the intercession of Mary, Queen of All Saints, for the grace to imitate her example and grow in our love and devotion to her, so that we might be counted among the saints of whom she is queen.