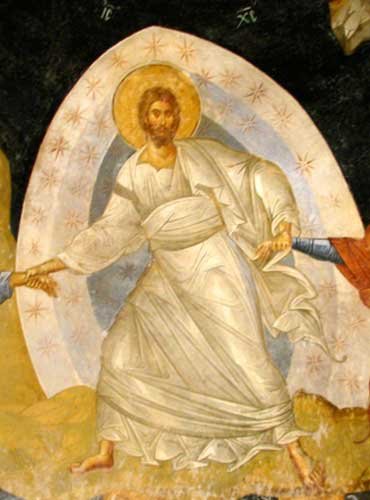 Dear brothers and sisters, today’s readings all make mention of the resurrection of the body, of a life that is to come after death. In the first reading, we heard how the seven brothers, along with their mother, were tortured and killed for their faith. In refusing to break God’s laws, they showed that they believed in a reward after death, that God, who gave them strength to endure their sufferings, would also give them a prize for their fidelity. We’re given a very beautiful image of that love for God and His commandments in the third son, as we’re told that “He put out his tongue at once when told to do so [so, there was no hesitation to receive the punishment] and bravely held out his hands [knowing full well what was to come], as he spoke these noble words: ‘It was from Heaven that I received these; [in other words, everything I have is a gift from God, to be used to glorify Him] for the sake of his laws I disdain them [I would rather lose them than have them become an instrument of sin] from him I hope to receive them again [God is faithful, and will restore them to me in time].” The result was that “even the king and his attendants marveled at the young man’s courage,

because he regarded his sufferings as nothing”: he saw them as nothing, as Saint Paul will later write to the Romans “I consider that the sufferings of this present time are as nothing compared with the glory to be revealed for us.”

We can ask ourselves an important question which finds an answer in the Gospel: what is this resurrection of the body? It might seem like a very basic question, but it is important for us to understand this point very clearly.

From the beginning, Christian faith in the resurrection has met with incomprehension and opposition. ‘On no point does the Christian faith encounter more opposition than on the resurrection of the body,’ [wrote Saint Augustine]. It is very commonly accepted that the life of the human person continues in a spiritual fashion after death. But how can we believe that this body, so clearly mortal, could rise to everlasting life?

How do the dead rise? What is ‘rising’? In death, the separation of the soul from the body, the human body decays and the soul goes to meet God, while awaiting its reunion with its glorified body. God, in his almighty power, will definitively grant incorruptible life to our bodies by reuniting them with our souls, through the power of Jesus’ Resurrection.

How? Christ is raised with his own body: ‘See my hands and my feet, that it is I myself’; but he did not return to an earthly life. So, in him, ‘all of them will rise again with their own bodies which they now bear,’ but Christ ‘will change our lowly body to be like his glorious body,’ into a ‘spiritual body.’”

What will this new body be like? Christ says simply that we will be like the angels; the great theologian Saint Thomas Aquinas gives five characteristics of the Risen Body. He says it is: incapable of physical pain or death, will have no imperfections in the body but a new form of beauty, it will possess subtility, by which the body is under command of the soul; it can pass through walls, for instance (see Jn 20:19), it will be agile, which enables the body to travel immediately to any distance at the “wink of an eye,” and, lastly, it will be bright, shining with the splendor of God’s grace.

So, why would the body need to rise? Why can’t it just disappear? There are many reasons, but two of the most important are that, first, human are made up of body and soul. We should have both in order to be “complete,” as it were, and so we should have our body reunited with our souls. Secondly, our bodies are the way we interact with the world. We use our bodies to do acts of charity, to pray (think of our movements and gestures at Mass), to comfort, but also to sin. Hence, it’s only right that, as our bodies have had a share in the actions that have brought us to heaven or to hell, it should share in the eternal reward or punishment.

So, practically speaking, what does this mean for us? Why does it matter that our bodies will be raised? We can think of two things: first, we’re reminded that everything God has given us is a gift, and the gift of our bodies is something very unique and special, so much so that it will share in our eternal reward or punishment. We should make a good examination of conscience as to how we use our bodies, not only in the sense of sinning with them, but how we take care of them. Our world is obsessed with physical beauty, or with being strong and fit just because we can. Our bodies are a gift from God: like every gift, it needs to be kept in its place. Our bodies shouldn’t be abused, or mistreated, because they are a gift, but they also shouldn’t be worshipped as if it were the most important part of us. What matters is getting both our bodies and souls to heaven. Whether we end up there or in hell depends a great deal on how we use our bodies.

Secondly, though, we’re reminded that this life is not all there is. After death, there will be a resurrection of the body, where there will be no more suffering or pain. Everything in this life should be seen in light of the eternal reward God wants to give us, and this includes sufferings and pain. Often people complain about their aches and pains; they are real, and they hurt. It’s true. Yet, rather than complain, we can use those sufferings are a way to bring ourselves closer to God, uniting ourselves to the sufferings He endured on the cross.

Today, then, let us ask the Blessed Virgin Mary, the Queen of the Resurrection, for the grace to work so as to use everything that God has given us to get to heaven.