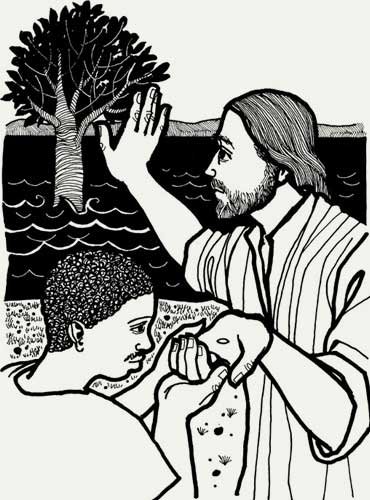 Today’s Gospel consists of three mini-discourses all linked with the theme of faith: first, Jesus warns His disciples about scandal, secondly admonishes them to rebuke and forgive sinners, and thirdly, in reply to the request to increase their faith, Jesus gives a rather cryptic reply.[1] In the first part, Jesus notes that there will always be τὰ σκάνδαλα, meaning, stumbling blocks, temptations, or snares. It’s a strong and categorical statement, and, indeed, the Greek is even stronger: more literally, it reads it is impossible for scandals not to come. There will always be scandals; Christ Himself tells us so. Aquinas reminds us that a person causes scandal when their actions, whether big or small, public or private, serve as a stumbling block to others who are on the path to God and perfection, and, in a homily, Saint Cyril of Alexandria gives a list of such stumbling blocks: “mean and annoying actions, fits of anger, insults, and slander.”[2] We could include any number of bigger things as well. There will always be people, things, and events that disappoint, anger, and confuse, and these in our world, our church, and our communities. What matters, however, is our reaction.

How are we to respond? Jesus warns His disciples to keep watch over themselves, not only so they don’t lose faith because of what others do, but also so that they aren’t a cause of scandal themselves through their own actions. As Saint Francis de Sales wrote, “while those who give scandal are guilty of the spiritual equivalent of murder, those who take scandal – who allow scandals to destroy [their] faith – are guilty of spiritual suicide.” Both dangers need to be avoided. Perhaps a rebuke is needed for a sinner, but, even if not, the obligation remains to love and to forgive them. Biblical commentators note that the Jewish rabbis had a saying: the perfect man would forgive another three times. Christ, however, requires something greater.[3] Indeed, a Christian who refuses to forgive, especially after having been forgiven by Christ, would appear to be more scandalous than anything that could have been done to them.

In the Gospel’s third section, the disciples acknowledge the importance of faith, that these things can’t be accomplished without grace, and they ask Jesus to increase theirs. Jesus doesn’t answer them, at least not directly, and instead gives a cryptic answer about a small faith uprooting a mulberry tree. The Doctors of the Church offer a wide variety of interpretations, but Saint Bede says that “our Lord here compares perfect faith to a grain of mustard seed, because it is lowly in appearance, but fervid in heart. But mystically by the mulberry tree, (whose fruit and branches are red with a blood-red color,) is represented the Gospel of the cross, which, through the faith of the Apostles being uprooted by the word of preaching from the Jewish nation . . . was removed and planted in the sea of the Gentiles.”[4] We can say that if we see our lives and the world with just a little bit of faith, the Cross will shed its light on even the most scandalous things. On the contrary, as Saint Teresa of Jesus writes, “If you seek to carry no other crosses but those whose reason you understand, [then] perfection is not for you.” Just as Moses was told to throw a piece of wood into the bitter waters at Marah, which then became sweet (cf. Ex 15:25), so too does the Cross give life to everything it touches, no matter how difficult or challenging it might be.

Through the intercession of Our Lady of Faith, let us ask for the grace of a deep faith that isn’t scandalized at the roughness of the world, but that rather seeks to plant the Cross in the midst of it.