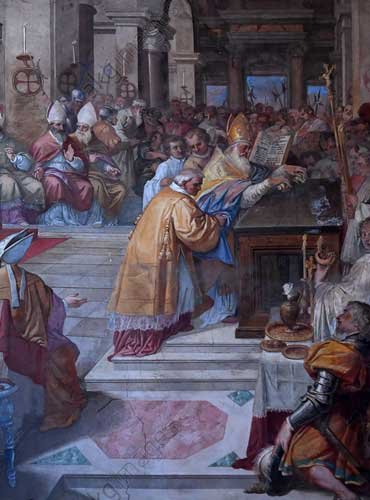 November 9th, 2022 – Feast of the Dedication of the Lateran Basilica in Rome

Today we celebrate the Feast of the dedication of the Lateran Basilica in Rome. It’s the oldest church in the West, built in the time of Constantine and was consecrated by Pope Sylvester in 324. This feast became a universal celebration in honor of the archbasilica, the ecclesiastical mother church, called “the mother and head of all churches of Rome and the world.”

The feast is perhaps even more important today, because it encourages us to take a step back from the news and all our concerns about the future, to really focus what is important. Think for a moment what would happen if the walls of the Lateran Basilica could talk. Imagine all the things they would have seen happen, all the rulers who have come and gone, all the disasters and misfortunes, and, yes, all the good things too. When the Visigoths sacked Rome in 410, the basilica was there. The Visigoths are gone now, but the basilica remains. When Genghis Kahn was ruling the Mongols, the basilica was there. Today Genghis Kahn is a faint memory, but the basilica still stands. From the Black Death, to sinful popes, to world wars, to saints and sinners, the basilica remains. Imagine how many priests were ordained there (among them, Cornelio Fabro), how many saints stopped in, how many popes sat there. Of course, what is important isn’t simply the physical structure of the Basilica, but the fact that Christ remains with His church, yesterday, today, and forever. People say they watch the news to know “what’s going on in the world,” but nothing could be falser. Watching the news tells us about isolated events here and there, but in order to “know what’s going on in the world,” we have to turn to theology, since God is true author and architect of the world. While leaders might go crazy over the little bit of power they participate, they “would have no power” if God hadn’t permitted them to wield it.

Time reveals God’s judgments: for instance King Danieri Basammula-Ekkere Mwanga, Queen Jeongsun, and the Regent Taicosama were important and impressive figures in their days, but now, no one remembers them, except perhaps accidently, as the rulers who ordered the death of St. Charles Lawanga, St. Andrew Kim, and St. Felipe de Jesus, respectively. They fulfill the words of Robert Louis Stevenson. Shortly after St. Damien of Molokai’s death, a Protestant minister, who was fairly well-known at the time, wrote a letter that was very critical of the priest. The famous author, Robert Louis Stevenson, was so angered by it that he wrote a scathing reply. Even though Stevenson wasn’t Catholic or even really believing, he clearly foresaw what God’s judgment would be: he wrote “If the world remembers you at all on the day when Damien of Molokai shall be named a saint, it will be in virtue of one work: your letter [in which you insult him].” And so it was: I remember when Damien was canonized in 2009, but the name Charles McEwen Hyde wasn’t ever mentioned.

Way back in the 300s, Saint John Chrysostom wrote, “Talk not to me of walls and arms: for walls wax old with time, but the Church has no old age. Walls are shattered by barbarians, but over the Church even demons do not prevail. And that my words are no mere vaunt there is the evidence of facts. How many have assailed the Church, and yet the assailants have perished while the Church herself has soared beyond the sky? Such might has the Church: when she is assailed, she conquers. When snares are laid for her, she prevails. When she is insulted, her prosperity increases. She is wounded yet sinks not under her wounds, tossed by waves yet not submerged, vexed by storms yet suffers no shipwreck. She wrestles and is not worsted, fights but is not vanquished. [Why does she suffer this war]? That she might make more manifest the splendor of her triumph.”[1] Saint Hilary wrote more concisely: “It is the peculiar property of the Church that when she is buffeted she is triumphant, when she is assaulted with argument she proves herself in the right, when she is deserted by her supporters she holds the field.”[2] We can ask ourselves: how much do we trust in God’s love for us and for His church? Do we really believe that the victory will be His and ours, that anything we suffer here is simply momentary? Do we believe in God’s love for us and for all people? As Saint Jose Maria Escriva wrote, “Trust always in your God. He does not lose battles.” God does not lose battles; He wins them, and wins them overwhelmingly.

Today, let us pray, through the intercession of Mary, Mother of the Church, for the grace to trust in God and in His providence which has guided, guides, and will always guide the course of history.