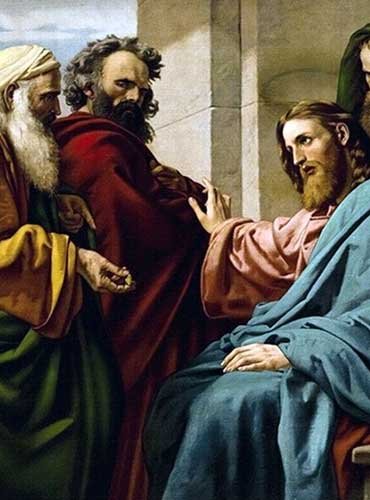 Today’s Gospel is a difficult one, but we can break it down into two parts: first, what Christ says to the Pharisees, and, second, what He says to His disciples.

When speaking to the Pharisees, the Greek word that Christ uses for observed, παρατήρησις (paratérésis) in the phrase “The coming of the Kingdom of God cannot be observed,” is very specific, and here is the only time it’s used in the entire New Testament. Literally it means “to watch very carefully from close by,” and the ancient Greeks used it to describe a doctor watching a patient for symptoms of some disease which he suspects.[1] The emphasis, then, is always on the physical act of seeing, at looking for visible things but simply leaving them at that, without considering their spiritual importance. Probably what the Pharisees were hoping for was the reestablishment of the Kingdom of Israel and the overthrow of the Romans. Such signs won’t take place, because this isn’t what the Kingdom is about.

Rather, as Pope Saint John Paul the Second points out in Redemptoris Missio, there are two characteristic gestures, or signs if you will, that accompany the coming of the kingdom: healing and forgiving. “Jesus’ many healings . . . show his great compassion,” but they also have a deeper meaning, one that can only be seen through faith. “They also signify that in the kingdom there will no longer be sickness or suffering, and that his mission, from the very beginning, is meant to free people from these evils. In Jesus’ eyes, healings are also a sign of spiritual salvation, namely liberation from sin. By performing acts of healing, he invites people to faith, conversion, and the desire for forgiveness (cf. Lk 5:24). Once there is faith, healing is an encouragement to go further: it leads to salvation (cf. Lk 18:42-43).”[2]

Then, turning to His disciples, Christ warns them that the days will come when they “will long to see one of the days of the Son of Man, but [they] will not see it.” Biblical scholars debate what the meaning is here, but the most probable explanation is that days of distress will come upon the disciples, and they will want to see Christ appear, once and for all, in the Parousia, but He won’t come right away.

So, what are we supposed to take away from this? First, we need to pray for the gift of understanding. As Aquinas defines it, “understanding implies an intimate knowledge, for intelligere [to understand] is the same as intus legere [to read inwardly].” In other words, through the gift of understanding, we come to see the things in this world, not simply as things, but rather as signs that point us to the God who made them, and who loves us so much that He orders everything for our good. We read in them their interior, deeper meaning, something the Pharisees were incapable of doing.

Secondly, we need to be firmly rooted in Jesus Christ, trusting Him at all times, even in the midst of sufferings and anxieties. Shortly before her death, in the midst of her sufferings, Saint Therese of Lisieux was asked “How do you manage not to give way to discouragement at such times?” She replied, “I turn to God and all His Saints, and thank them notwithstanding; I believe they want to see how far my trust may extend. But the words of Job have not entered my heart in vain: ‘Even if God should kill me, I would still trust in Him.’ I admit it has taken a long time to arrive at this degree of self-abandonment; but I have reached it now, and it is the Lord Himself Who has brought me there.” We can ask ourselves: how much do we really trust? How much do we “read into things,” in the sense of trying to see God at work through them?

Today, let us ask for the grace, through the intercession of Mary, Queen of Heaven, and Saint Leo the Great, for the gift of understanding and the grace to root our lives in Jesus Christ.