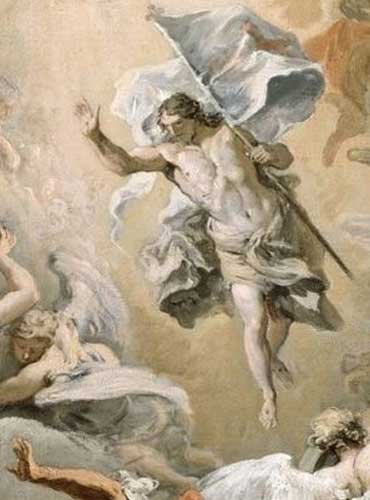 Today’s Gospel marks the end of chapter 17 of Luke’s gospel; the entire chapter is filled with references to Christ’s second coming and the end times, and today’s selection is no different. In particular, we can focus on two images Christ uses: first, His haunting phrase “Remember the wife of Lot,” and, second, the cryptic reply, “Where the body is, there also the vultures will gather.”

Regarding the first, it’s useful to recall what Jesus is referring to: in Genesis ch. 18, Abraham pleads with God to save Sodom and Gomorrah if He can find 10 good people. He can’t, and so the cities are marked for destruction. In chapter 19, angels tell Lot and three members of his family to make haste and leave the city, and not to look back. It’s interesting that Lot’s decision to live in Sodom in the first place, a place known for its sinfulness, as well as the later actions of his daughters and wife, would seem to indicate that they themselves aren’t really just people. Rather, it seems that God, in His mercy and His friendship with Abraham, intervened and sought to save the four from the destruction. In this we see that God’s mercy is a free gift, and we need to be thankful for it.

Lot and his two daughters obey, leaving without turning back, but Lot’s wife turns back and became a pillar of salt. Even though she had physically left Sodom, it’s clear that her heart was still there on the many things and people she had left behind. Christ points this out in the preceding verses: “On that day,” He says, “a person who is on the housetop and whose belongings are in the house must not go down to get them, and likewise a person in the field must not return to what was left behind.” What was left behind needs to stay behind. “Whoever seeks to preserve his life will lose it, but whoever loses it will save it.” Whoever holds on to those things from their past life is lost, but the one who freely renounces those things will reach eternity. This is a very important message for us religious: have we really left the world behind? Or do we keep looking back at it? It could mean looking back with longing at something we had or might have done, or to be attached to a particular way of thinking, or simply being constantly concerned about what’s going on in the world, to be in the know. However, in any event, to turn back is to not embrace the totality of our vocation, to cling to something else other than Christ. It’s interesting that Lot’s wife has no name; she’s simply called “Lot’s wife,” even in the Jewish tradition that Jesus was raised in. If we refuse to leave the world, we become simply a part of it, a cog in the machine that could care less about who or what we are. Sin tends to make everyone the same; it’s only in Christ that we really become who we are meant to be.

After commenting on the sudden appearance of God’s judgment, the disciples ask Christ where this will take place. Jesus replies with the cryptic proverb: “Where the body is, there also the vultures will gather.” In other words, God’s judgments fall where they are needed. We need, not only to be ready, but also to be focused on Jesus Christ and living only for him. Lot’s wife was hand-picked for salvation, and she gave it up.

Today, let us ask for the grace, through the intercession of Mary, Queen of Heaven, and Saint Martin of Tours, for the grace to follow Christ with our whole hearts, not following Him only halfway, but completely embracing our vocations.