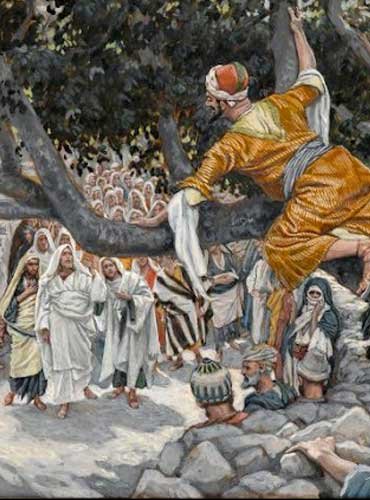 Today’s Gospel highlights the difficulties that sometimes we encounter in following Christ. On one hand, Zacchaeus was short to begin with, and so it was hard enough for him to see anything anyways. Furthermore, the crowds that prevented Zacchaeus from seeing probably thought that climbing a tree was a rather foolish thing to do, and, given their intense dislike for the man, they probably didn’t make it easy for him.

Regarding these difficulties, we can also see two important points laid out in the Gospel: first, the need for recollection and humility, and, second, the need to place everything at God’s service. Regarding the first, certainly the crowd that awaited Jesus as He entered Jericho, a large and important city at the time, was anything but quiet and organized. The already bustling city, now even more filled with onlookers, must have been quite loud indeed. Yet, in the midst of it, Zacchaeus was able to set his heart on “the only thing that mattered,” on seeing Jesus Christ. To that end, he raised himself above the crowd and the world by doing something rather foolish: by climbing a tree. The same could be said for us: by recollection, we leave behind the noise of the world, and remain entirely focused on God and on doing His will. It is humility, and, more particularly, humble confidence in God’s love for us, that enables us leave behind the comforts of the world and to endure the sufferings that come with embracing God’s will.

Secondly, when Zacchaeus gives half of his goods to the poor, and offers a four-fold repayment to those he cheated, Saint Augustine comments that “it’s as if he were saying, ‘The reason I am keeping back half for myself is not in order to have it, but to have something from which to pay people back.’” In our case, there are some things that we simply have to give up or do without. These might be bad habits or ways of thinking that don’t lead us to God; there are also things that we keep, like our gifts and talents, our skills. If we keep them, though, they are to be placed at the service of our brothers and sisters.

Whatever sacrifices we make for God are never done in vain; God is never outdone in generosity. On the contrary, Jesus comes to souls that love Him dearly. As Saint Teresa of Jesus said, “Since Jesus doesn’t force our will, He takes what we give Him; but He doesn’t give Himself completely until we give ourselves completely.” Such was the experience of Zacchaeus; when he opened his heart to Christ, Christ immediately made Himself at home. Let us pray, through the intercession of Mary, Queen of all Saints, and Saint Albert the Great, for the grace of humility and true love for our Savior, and the grace to imitate Him in our lives.