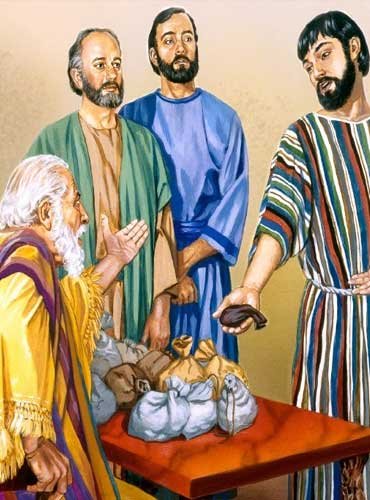 Today’s Gospel presents a lengthy parable that, as Luke writes, Jesus intended for those who thought the Kingdom of God was going to appear immediately. His listeners thought that Jesus would overthrow the Romans and restore the kingdom of Israel, right then and there, but His parable emphasizes the king’s delay, and the need to continue working. In order to understand it better, and also in order to apply it to our lives, we can consider in a particular way the wicked servant and his reply.

However, even more dangerous is the lie: in order to defend his actions, the servant says: “I kept it stored away in a handkerchief, for I was afraid of you.” The lie is contained in the statement that the servant didn’t do anything with the coin because of fear. On one hand, the wicked servant didn’t do any trading with the money: instead, he wrapped his coin in a σουδάριον (soudarion), a precise word for the cloth used to wipe up sweat, blow your nose, or, as we read in John’s Gospel, to wrap a dead person’s head in, none of which are very pleasant. In other words, the servant treats the gift with utter distain; although he claims he feared the Master, it’s clear that he didn’t appreciate the gift in the first place. On the other hand, as we read in the Psalm: “Blessed are you who fear the LORD, who walk in his ways!” In other words, the one who fears the Lord lives in accord with that fear. A real fear becomes action. The servant says that he is afraid, but the cause of his inaction isn’t fear but laziness. Hence the master says: “Wicked servant.” So, while his fellow servants were out working and laboring, he was simply there, seated, killing time. As Saint Josemaria Escriva wrote: “When a Christian kills time on this earth, he is putting himself in danger of ‘killing Heaven’ for himself, that is, if through selfishness, he backs out of things and hides away and doesn’t care. A person who loves God not only hands over to the service of Christ, what he has and what he is in life. He gives his very self.”

We can ask ourselves: do I give myself entirely in God’s service, be that as a mother or a father, as an employee, however it is? Do I live only to kill time? Do I make good use of my talents? Let us ask, through the intercession of Mary, Queen of Heaven, and Saint Joseph, and Saints Margaret of Scotland and Gertrude, to obtain for us the graces to be faithful in our labors, to give ourselves totally in God’s service, and to use our talents in order to make God’s kingdom grow.