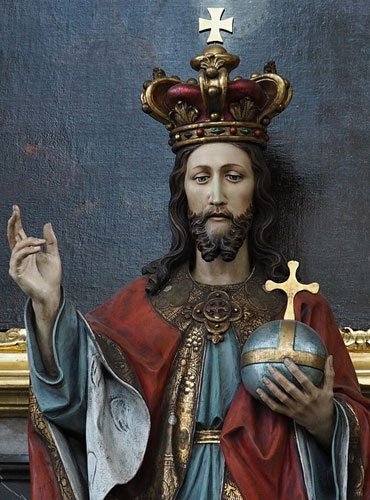 The Solemnity of Our Lord Jesus Christ, King of the Universe, November 19th-20th, 2022

Brothers and sisters, today we celebrate the Solemnity of Our Lord Jesus Christ, King of the Universe. This is the last Sunday in ordinary time, and so the Church asks us to take time to mediate on Our Lord as King of the Universe, the Alpha and the Omega, the First and the Last.

The Solemnity of Christ the King was established by Pope Pius XI in 1925 with his encyclical Quas Primas, and he proclaimed it in the midst of problems throughout the world: for instance, in Russia the Communists had come to power, the after-effects of World War I, hunger, poverty, and despair, were still being felt throughout Europe, and in Mexico the government was rabidly persecuting Catholics (and this encyclical is why many of the Mexican martyrs died shouting “Long live Christ the King!”).[1] Yet, in the face of this, the Pope had the boldness to proclaim what was already known but in danger of being forgotten: that Christ is the real king of men, nations, and history. In our day too, we need to be reminded of Christ’s kingship. Knowing that Christ is King, as Pope Pius XI explains, means He is king not only in the general sense of ruling the whole universe, but also and more specifically of our individual lives. This should give rise to at least three attitudes[2]:

So, confidence, abandonment, and love all follow when we consider how Christ is king.

In the encyclical we mentioned, Pope Pius XI said that one of the reasons Christ is called King is because He “reigns ‘in the hearts of men’ both by reason of the keenness of his intellect and the extent of his knowledge.” This means Christ knows everything: He knows what we need before we ask and, as a good earthly king looks after his subjects, how much better does a Divine King! This is all we mean when we talk about Divine Providence: providence comes from the Latin pro, meaning ahead, and videre, to look. God looks ahead of us, and is already planning to give us what we need before we even know we’ll need it.

The saints knew first hand of God’s providence. The story is told that one day Saint Joseph Cottolengo, the founder of the Little House of Divine Providence, was approached by one of the nuns who worked at his orphanage. She came running to Fr. Cottolengo to tell him that the House had no food for the main meal for the hundreds of residents, but she had saved a single coin, the only money in the entire house. Father asked for it and, once he had it in hand, he promptly threw it out the nearest open window. “There,” he said, “now we have absolutely nothing, and Divine Providence will have to provide.” Of course, providence provided.

The point is not that we should throw all of our possessions out of windows. No, the point is that, when we put limits on what God can do, when we tell God “Look, I can handle this; you can be my backup plan,” well, we do just that: we “limit” Him. Some biographers recount that the sister has the coin “in her bosom,” that is, close to her heart.  What would that coin have bought anyways? Certainly not enough for all the people in the house. Yet, she trusted in her coin rather than in her God. God gives us our freedom, but we have to choose to turn to Him at all times for our needs. Otherwise, we erect shrines to ourselves, and blame Him for the results when things go awry. Rather, we must always remember that Christ is King, yesterday, today, and forever, in the little details and in the great things.

Abandonment to God’s will

Secondly, the Pope continues, saying that “Christ reigns, too, in the wills of men, for in him the human will was perfectly and entirely obedient to the Holy Will of God, and further by his grace and inspiration he so subjects our free-will as to incite us to the most noble endeavors.”

Maybe some of you have seen Michelangelo’s famous statue of David. It’s a beautiful work of art, one of Michelangelo’s masterpieces. Interestingly enough, however, the block of marble that he carved it from lay abandoned and rejected for twenty years before he started working on it. Why? Another artist, one of less talent, had ordered the block to make a statue, but, when the block arrived and he began working on it, he saw flaws in the marble and refused to continue. Another artist thought he would try, but with the same result. So, that chipped, broken, flawed piece of marble lay cast aside until Michelangelo saw it and began his work. Now, it’s not that Michelangelo didn’t know the marble had problems; he was an expert, and he would’ve seen the problems even more clearly than those other two. Yet, he also saw something different: he saw what a great piece of art it could become. When Michelangelo finished, and people asked how he could’ve done such a great work, he is said to have replied simply, “I just carved away everything that wasn’t David.” And the flaws in the marble? They’re still there, sort of: Michelangelo used the problem areas as muscles and details, transforming them into something beautiful.

So, what’s the point? God is the great artist of lives and souls. He can transform something that we consider a mess, or a waste, or useless, into holiness. All we have to do is let Him chisel away at our hard hearts. This is where the abandonment comes in: the marble block became something beautiful because it didn’t resist Michelangelo’s work. It needs to be the same with us: our human wills should be come obedient to the Will of God, not just in the sense of following the commandments, but also and even in the sense of accepting whatever God sends our way. If Christ knows absolutely everything that will happen to us, that means He either makes it happen, or at least permits it to happen. No matter what happens in our lives, we can see the hand of our Divine King, tracing the path; in this way, we let God chisel away all that is not really me, to reveal what’s hidden within: our true dignity and happiness as a holy child of God.

Such abandonment, a state of weakness freely assumed, gives us strength and joy in spite of adversity. Remember that Jesus told Saint Paul: “Power is made perfect in weakness.” This was the attitude of Ignatius Cardinal Kung Pin-Mei, who was imprisoned for almost 33 years in China; upon finally leaving prison, he said simply, “With God, time is never wasted.” 33 years, and the Cardinal was convinced that not a single second of it was wasted, because God had allowed it. His will was completely in conformity with Christ’s.

“This [abandonment] is the beautiful freedom of the sons of God,” writes Saint Alphonsus Ligouri, “and it is worth vastly more than all the rank and distinction of blood and birth, more than all the kingdoms in the world.”[3] Indeed, because it’s the key to the kingdom of heaven, to Christ’s kingdom.

Love of Christ and His People

Lastly, the Pope also remarks that “Christ is King of hearts, too, by reason of his ‘charity which exceeds all knowledge,’ and his mercy and kindness which draw all men to him, for never has it been known, nor will it ever be, that man be loved so much and so universally as Jesus Christ.”

When we think of Christ the King, when we see His providence and His will at work in our lives, we see how much we owe our Sovereign: we owe our gratitude, our trust, our very lives. Like Saint Claude de la Colombière said, “When I see of how little account I am, and what it is I can do for God’s glory by emptying myself in His service, I am ashamed at the mere thought of depriving Him of anything.”[4] That service entails loving God and our neighbors, in whatever vocation God has chosen for us.

So, as we close another liturgical year, let us pray for God’s guidance in our lives, for the confidence to trust in His Providence and to abandon ourselves to His will, so that we might truly love Christ and His people as He desires. We ask for this grace through the intercession of Mary, Queen of Heaven and Earth.

[1] See Quas Primas, On the Feast of Christ the King, 23-24,the encyclical of Pius XI establishing this feast.

[3] Uniformity with God’s Will.