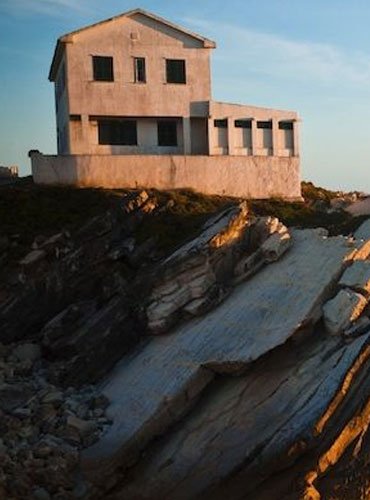 In today’s Gospel Jesus gives a rather bleak warning concerning false discipleship, that is, those who profess Christ in word, or hear what He says, but fail to follow through with what He commands. Christ tells us explicitly that it’s not enough simply to call on Him; we must be obedient to the Father’s instructions.

This is the difference between the two houses. Presumably they looked similar and both appeared sturdy, but what mattered wasn’t external appearances, but rather the foundation in which they were sunk. The one who hears God’s words and obeys His will builds on rock, because ultimately docility to God’s will is the only thing that brings happiness and stability, whereas the one who might hear God’s word, but interprets it in their own way or follows their own will, sets their house on a flimsy foundation.

This docility to God’s will is something that we must cultivate in our lives, because our entire happiness in both this life and the next revolve around it. There will never be any shortage of storms that we must confront, be they external problems, or internal struggles. Obedience and docility to God, both in what He asks of us and what He sends us, is the key to happiness. As we prepare ourselves for Christmas, we can think of the words of Saints Alphonsus Ligouri and Francis de Sales. Writing about the just person who unites their will to God’s, Ligouri writes: “The just man is . . . constant in his serenity, no matter what [befalls] him. His calmness of soul is founded on his union with the will of God; hence he enjoys unruffled peace. This is the peace promised by the angel of the Nativity: ‘And on earth, peace to [people] of good will.’ Who are these ‘[people] of good will’ if not those whose wills are united to the infinitely good and perfect will of God, the good, and the acceptable, and the perfect will of God.” The angelic promise heard at Christmas is fulfilled every day for the one whose good will is that of the Father. We can ask ourselves: do we really try to unite our wills to God’s, not only in what He commands, but also in what He sends our way?

Let us ask, through the intercession of Mary, Our Lady of Expectation, for the grace not only to be hearers of the Word, but also ones who live it out in obedience and docility.