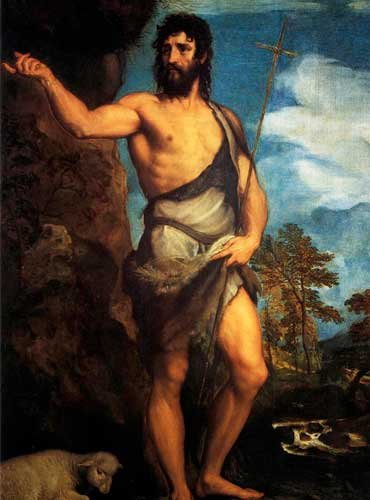 Second Sunday of Advent – Year A

Brothers and sisters, it sometimes happens that we get used to things, and don’t pay attention to them like we should. Today’s Gospel probably falls into this category; we’ve all probably heard the precise time of when John the Baptist came on the scene before, and his message is well known. However, there are three things that are worthwhile to reflect on, three things that will help us to prepare for the birth of Christ: first, the figure of John the Baptist himself, secondly, the message that he gives, and, thirdly, his words regarding Christ and the way He will come. So, first the figure, secondly the message he brings, and thirdly his words about Christ.

The Gospels give us a very vivid description of John the Baptist: his curious sense of fashion led him to wear clothing of camel hair with a belt, and he kept the Jewish dietary laws by eating locusts and wild honey, both of which are kosher, if not perhaps odd. To add to these characteristics, today’s Gospel implies, and Luke’s Gospel tells us explicitly, that “the word of God came to John the son of Zechariah in the desert,” meaning that John was already in the desert when the word came to him. It wasn’t that the word came, and John felt the urge to run out into the desert; rather, God had already called John apart, as Luke’s Gospel tells us, “the child [John] grew and became strong in spirit, and he was in the desert until the day of his manifestation to Israel.”

Notice, too, that John doesn’t enter the cities; Mark tells us that John baptized repentant sinners in the “wilderness,” meaning, the desert or at least an uninhabited place. This, of course, begs the question: if John was to prepare the way for Christ, wouldn’t it have been more effective to go, say, to the cities, or to the palaces, where there are people, and particularly people of influence? But John, under God’s guidance, doesn’t go to those places. He remains in the desert, and those who want to find him must seek him out in the desert.

There is a very important point we can take away from this. The desert is an abandoned place; there’s nothing there. Cities are loud and full of noise, gossip, and a thousand and one other distractions. In the desert, though, John was alone with God, and could hear the word of God when it came to him. Recall that when God really wanted the Israelites to learn to listen to Him, when He really wanted their attention, He had them spend forty years in the desert. They wouldn’t even have had food or water had it not been for God; the only things in the desert were God and His people.

The point is this: God doesn’t speak in the midst of noise and distractions. If we want to hear His word, to listen to His voice, we can’t get sucked into the millions of things that aren’t Him in the world that call for our attention. We have a beautiful example of this in the first book of Kings: just after killing Jezebel’s false prophets, Elijah runs away, afraid of losing his life. He reaches Mount Horeb, and hides in a cave. To reassure him, God tells him that He will come passing by. The Bible tells us: “Then the LORD said: Go out and stand on the mountain before the LORD; the LORD will pass by. There was a strong and violent wind rending the mountains and crushing rocks before the LORD—but the LORD was not in the wind; after the wind, an earthquake—but the LORD was not in the earthquake; after the earthquake, fire—but the LORD was not in the fire; after the fire, a light silent sound” (1 Kgs 19:11-12). That light silent sound, like a whisper, as some version have it, would’ve been impossible to hear if Elijah hadn’t been listening, and if there had been noise. As Saint Mother Teresa of Calcutta put it: “We need to find God, and he cannot be found in noise and restlessness. God is the friend of silence. See how nature – trees, flowers, grass- grows in silence; see the stars, the moon and the sun, how they move in silence… We need silence to be able to touch souls.”

We can ask ourselves: do we go into the desert, leaving behind the noise of the world. Do we know that God is not in the iPad, or iPhone, or Facebook, or the TV, or the computer, but rather in the Eucharist, waiting for a moment to converse with us, if only we’d be silent before Him? It’s not that these things are necessarily bad, but distractions abound in this world. John heard God’s voice in the desert silence, and those who wanted to hear his message had to meet him there. We, too, have to meet God in the silence, in the desert.

Secondly, we can consider the message that John the Baptist preached. “Prepare the way of the Lord; make straight His paths.” The Greek word that Matthew uses here for paths is τρίβος (tree’-bos), which comes from the verb, tri-bo, which means, “to rub.” The paths that Matthew is referring to aren’t nicely paved roads, or major highways that the Romans had built. No, he’s talking about the paths that have come up just from people walking repeatedly over the same land; these paths are simply worn down trails. If we think for a minute, it becomes clear that these paths wouldn’t go through mountains, or over difficult terrain. No, these paths would be, for lack of a better phrase, the “paths of least resistance,” the easiest places to walk.[1]

Of course, we would expect that these paths would go every which way, first to the right, then to the left, here, there, and everywhere. They certainly wouldn’t be straight, although this would be the fastest route, since the Jordan countryside is full of hills and difficult terrain. To fix this, then, in Luke’s Gospel John not only gives these commands, but also speaks figuratively of correcting both problems: “Every valley shall be filled and every mountain and hill shall be made low. The winding roads shall be made straight, and the rough ways made smooth.” John recommends two things: leveling the land, and correcting the paths.

John isn’t speaking of undertaking a massive construction project in the Holy Land; he speaking of how we ready ourselves to receive the Savior. It’s worthwhile to mediate on how these figures apply to our lives: we can think of the mountains and valleys as the sins or failings that keep me from God. What are the big mountains or valleys that are in my way that I refuse to tackle? These might be big sins that I can’t seem to break free from or to overcome, or some past injury that I haven’t been able to get over; perhaps I refuse to level the hills of my pride, or to ask God to fill in my imperfections and weaknesses that only He can fix. We can think of the paths that need straightening as those things in our lives where we try to take a shortcut around the work that needs to be done. These might not necessarily be sinful, but are perhaps imperfections, things that are less than perfect, less than the ideal to which we are called. It’s clear too that unless the ground is level, the path will never be straight. We can ask ourselves: where do I avoid doing the difficult work in my soul? Where do I take the paths of least resistance? Is it at work, where I refuse to bear witness to my faith? Is it at home, where I refuse to go the extra mile for my spouse or my children?

Lastly, John ends his discourse with some rather fiery words about Christ: Shouting to the Pharisees, he says, “You brood of vipers! Who warned you to flee from the coming wrath? . . . His winnowing fan is in his hand. He will clear his threshing floor and gather his wheat into his barn, but the chaff he will burn with unquenchable fire.” Even in today’s first reading which is otherwise peaceful imagery, we catch a glimpse of this fierce justice: “He shall strike the ruthless with the rod of his mouth, and with the breath of his lips he shall slay the wicked.”

On one hand, these words remind us that we must make a sincere effort to change our lives: we really must bear fruit worth of the One who has called us apart. The person who makes no real effort to show their conversion and repentance, hasn’t really converted or repented at all. At the same time, John’s words also remind us to be patient. Sometimes we might ask what John probably asked himself as Christ began His ministry: why doesn’t God do what John says? Why doesn’t Christ take every tree that does not bear good fruit and cut it down and throw it into the fire? Why? John’s words are a reminder that the world, and the Church too, are filled with both saints and sinners, people who have found their salvation in Christ and people who are still looking for it. Fulton Sheen offers a beautiful commentary on this, placing this response on Jesus’ lips: “When I come into the threshing floor I see not only wheat but human chaff that can be salvaged and saved. Bring to Me sinners and those who want to be saved, and I will make them think of My Passion rather than their passions; lead to Me those who believed God is dead, and I will show them how dead they were by bringing them to life. I shall not break prison bars, but shall teach prisoners to be resigned to My will, for I, too, shall be in prison.” “The Lord does not delay his promise, as some regard ‘delay,’” writes Saint Peter in his second letter, “but He is patient with you, not wishing that any should perish but that all should come to repentance.” It takes times, but there is no better time to practice patience than this time of Advent.

As we prepare for Christ’s birth at Christmas, let us ask, through the intercession of Mary, Mother of God, for the grace to prepare our hearts to receive Him well, a grace that Mary, who carried Him in her womb for nine months, knew well.

[1] Thanks to Dcn. Jim for pointing this out: http://deacon-sailor.blogspot.com