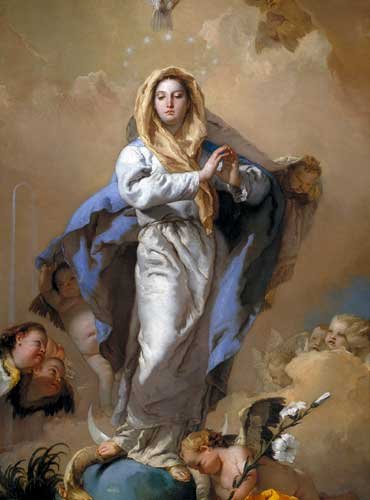 Today we celebrate the Solemnity of the Immaculate Conception, the patroness of the United States. The Solemnity was established by Pope Pius IX in 1854, with his Apostolic Constitution Ineffabilis Deus. In that document, the Pope explains what this teaching means, when he makes the official proclamation: “We declare, pronounce, and define that the doctrine which holds that the most Blessed Virgin Mary, in the first instance of her conception, by a singular grace and privilege granted by Almighty God, in view of the merits of Jesus Christ, the Savior of the human race, was preserved free from all stain of original sin, is a doctrine revealed by God and therefore to be believed firmly and constantly by all the faithful.”

This solemnity, then, doesn’t refer to Jesus’ conception; we celebrate that on March 25th, the Annunciation, and then His birth nine months later on December 25th. Rather, the Solemnity of the Immaculate Conception commemorates Mary’s conception, and, just as in the case of Jesus, in nine months, we’ll celebrate Mary’s birthday on September 8th. In light of the fact that she would be the Mother of the Savior, God granted her the singular privilege of being untouched by sin. As we know, all the rest of us are affected by original sin but, by a special grace, God kept that stain from touching the Blessed Virgin Mary. As Pope Saint John Paul II put it, “Christ, who is the author of . . . grace . . . must be particularly generous with his Mother. He must redeem her in an especially superabundant way from sin. This generosity of the Son towards his Mother goes back to the first moment of her existence. It is called the Immaculate Conception.”

This solemnity should fill us with joy, because it recalls God’s great love for us; in order to save us, to send us His Son, He prepared His Son’s mother in a particularly special way, and thus Mary became, in the words of an English poet, “our tainted nature’s solitary boast.” Mary is completely and entirely human, just like us, and from our fallen nature, which had been contaminated by sin ever since the fall of our first parents, God raised up one creature, one of us, to bring about a new creation. Now, she sits as queen of heaven and earth, at Her Son’s right hand, to intercede for us, asking for the graces that we need and the gifts that we most desire. Indeed, at Lourdes, that place associated with so many graces and healings, when Saint Bernadette asked Our Lady her name, she was finally told, “I am the Immaculate Conception.” Since she is sinless, Mary can be particularly and uniquely close to God; because she’s human, she can be particularly close to us, imploring what we need in order to be with her forever in heaven. We can ask ourselves: do we really take advantage of our Lady’s intercession, asking her to intercede for us throughout the day?

Let us ask, through the intercession of Mary, the Immaculate Conception, for the grace not only to reject sin in our lives, but to live as worthy sons and daughters of so noble a mother.