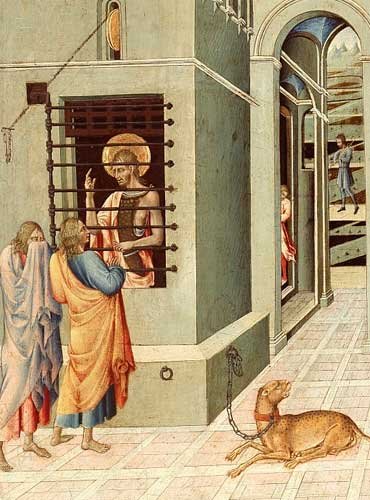 Today’s Gospel brings us face to face with John the Baptist, in prison and wondering about Christ. Fulton Sheen calls John the Baptist “the most frustrated man in the Gospel,” since the only reward he received for his preaching and for pointing out the Lamb of God was to lose his disciples and find himself in prison. Since all of us, at some point, are frustrated, Sheen’s meditation on this passage is worth considering. He writes: “The only answer to a frustrated priestly or religious life is to see how the Lord handles frustration. When nothing makes sense, one immediately is brought face to face with the most thwarted and disappointed man in the Gospel: John the Baptist. What a contrast between him crying, “Behold the Lamb of God!” and his question a year or more later, “Are you the Christ?” His mission did not end as he thought it should. [John the Baptist was a fiery preacher,] but the curtain drops. The voice of in the wilderness becomes a whisper. The Baptist is now Herod’s prisoner. Where was Christ? The herald is in a stone cage while the King is on the highway. He Who drew more crowds than John as a preacher, and now has them, leaves John in death row. If He could open blind eyes, why could He not send a ray of light into the darkness of a cell? Why? To whom shall we go in such dark moments as we face the ugly mask of meaninglessness? John the Baptist when to Christ. Even though he didn’t understand the Master’s ways . . . he took all his doubts and despair to the Lamb. Summoning two of his disciples, he sent them to the Lord with this message: “Are you the one who is to come, or are we to expect some other?” (Lk 7:19-20). That is the question asked in the midst of disappointments and loneliness. St. Cyril reflects, “Jesus knew as God what John’s design was, and He put it into his heart to send the messengers when He was working miracles, the true answer to his question.” Then Christ gave the delegation this answer: “Go and tell John what you have seen and heard: the blind regain their sight, the lame walk, lepers are cleansed, the deaf hear, the dead are raised, the poor have the good news proclaimed to them. And blessed is the one who does not find me a stumbling block” (Lk 7:21). To paraphrase His answer, “The faith I require is not when there is money in the bank, but when there is bankruptcy; not to believe when the sun is shining, but when it is hidden; the seeming heedlessness of My Divine Power is never loveless or an unwise delay.” Somehow or other, Christ doesn’t answer “OK” when we say “Help me.” Priests and religious may pledge their lives to Him, but there will be moments when they will think that He is not equal to their “unbearable situation.” But in such moments, like John, they must bring their seeming defeat to the Lord, and never brood over it and assume they know better than the Lord. Though the Lord doesn’t rescue us from the unbearable, His Heart is ever grateful for the acceptance of His Will. Though He left John awaiting the executioner’s axe, the Lord preached a funeral oration before the headless corpse was gathered to the disciples: “What did you go out to the desert to see—a reed swayed by the wind? Then what did you go out to see? Someone dressed in fine garments? Those who dress luxuriously and live sumptuously are found in royal palaces. Then what did you go out to see? A prophet? Yes, I tell you, and more than a prophet. This is the one about whom scripture says: ‘Behold, I am sending my messenger ahead of you, he will prepare your way before you. I tell you, among those born of women, no one is greater than John; yet the least in the kingdom of God is greater than he.” It is not likely that John ever heard these words, for they were pronounced after the messengers left. The moment when we condemn the Lord for forgetting us, is the time when the Lord most highly praises us. We have no idea how much we are loved in that hour when it seems we are the most unloved. John thought of himself as a broken and forgotten reed, but the Lord saw him as unshakeable as a rock. The cruelest words in Scripture are: “I tell you this: they have their reward already” (Mt 6:2). In the Divine order, the imprisoned souls fly. No priestly or religious heart has freedom; it must be captured before it can fly. The hour of frustration is the clay of emancipation. The apparent forgetfulness of Christ as we toil in oblivion is the time when we are most remembered, for it is possible to be “greater than John the Baptist”: and that is by being the “least.” The ark that the Spirit of Christ builds can float in all flood waters. The hope of the future mansion is the house unfinished here.”

We ask, through the intercession of our Lady, Mother of all Religious, and Saint John the Baptist, for the grace to offer ourselves entirely to God, even in the most difficult times and most frustrating moments.