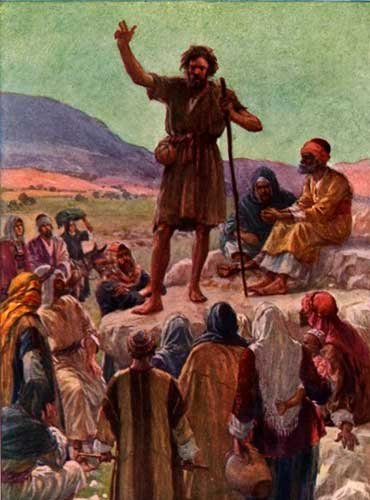 Today’s Gospel gives us the conclusion of Christ’s encounter with the disciples of John the Baptist, wherein Christ praises John (although his disciples have already left). We can consider the figure of John the Baptist according to what three Fathers of the Church have written, and then how to apply John’s and Jesus’ example in our own lives.

First, although we heard Fulton Sheen mention that he thinks John the Baptist was frustrated, Ephrem the Syrian thinks that John was sure Jesus was the Christ, and sent his disciples, not for his confirmation, but rather to encourage his disciples to follow Jesus. “John sent them to him, not to interrogate him, but rather that the Lord might confirm those former things that John had proclaimed to them. John was directing the minds of his disciples toward the Lord. . . .  He sent them out in such a way that, having seen Jesus’ miracles, they might be confirmed in their faith in him.”[1]

Secondly, Cyril of Alexandria comments on just how gentle Jesus is: “Here see, I ask, the beautiful art of the Savior’s management. He does not simply say, ‘I am [the Messiah].’ If He had spoken thus, it would have been true. He leads them to the proof given by the works themselves.”[2]

Thirdly, and with a great deal of poetic flourish, Saint Ambrose sees in Christ’s comparison between John and a reed: when a reed is plucked from the garden of the world, and stripped of what is unnecessary (meaning, stripping away the old man like we would whittle down a reed), it becomes a pen. “This pen imprints the precepts of the Holy Writ in the inner mind and inscribes them on the tables of the heart. . . .  Imitate this pen in the moderation of your flesh. Do not dip your pen, your flesh, in ink but in the Spirit of the living God so that what you write may be eternal. . . .  Dip your flesh in the blood of Christ, as it is written, ‘that your foot may be dipped in blood.’ . . . You dip your flesh in Christ’s blood as you wash away vices, purge sins, and bear the death of Christ in your flesh.”[3]

So, what should we take away from all this? First, the importance of helping others grow in their faith. This means not giving scandal, on the one hand, but also by living coherently with our faith, even in the small things. We can say that we are Christians and, as long as we’ve been baptized, technically that’s true, but it is much more important to proclaim our belonging to Christ with actions as opposed to simply in words. Part of this living coherently means to strip off the old man with his vices, imperfections, and defects so as to be able to live entirely for Christ. We can also think of the words of Saint Teresa of Calcutta, that we are all “pens in the hands of a loving God who is writing love letters to the world.” Yes, we can be pens, but only if we strip away all those things that keep us from following Him and serving Him.

Today, through the intercession of Saint John the Baptist, let’s ask for the grace to live Christian lives that are coherent and inspire others to follow Christ the King.