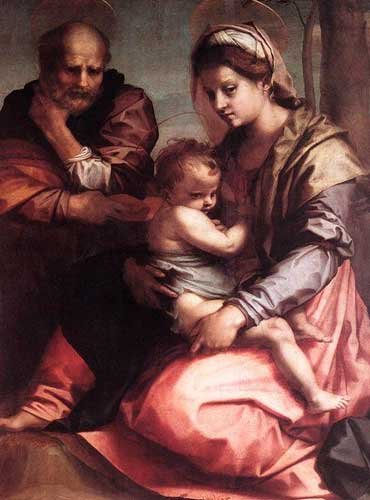 Today we begin a special set of readings: from December 17th to the 25th, the Church gives us readings that are directly related to the events surrounding the birth of the Messiah. Today’s first reading recounts the blessing that Jacob gave to Judah. It’s interesting that Judah is the one who receives this great blessing, and will be the one honored by his brothers, since he’s not the firstborn; Reuben is, but, as Jacob tells Rueben, “You, Reuben, my firstborn . . . turbulent as water, you shall no longer excel.” It is rather Judah who unexpectedly receives the blessing, a blessing that we can only fully understanding in light of today’s Gospel, wherein Matthew recounts the genealogy of Jesus. If Judah’s blessing is a surprise, then Jesus’s lineage should be even more startling. In eighteen verses, Matthew recounts all the ancestors of Jesus from Abraham. Among the surprising entries, we find:

•    “Judah became the father of Perez and Zerah, whose mother was Tamar.” Matthew neglects to mention that Tamar was Judah’s daughter-in-law, and Perez and Zerah were their children because she had pretended to be a prostitute, and Judah paid for her services.

•    “Salmon the father of Boaz, whose mother was Rahab.” This Rahab is thought to be prostitute as well, and it was in her inn that the spies from Israel took refuge in Jericho. As a Canaanite, she shouldn’t have been part of the chosen people.

•    “Boaz became the father of Obed, whose mother was Ruth.” Ruth was a Moabite, and shouldn’t have been included in a decent Jewish family either.

•    The most interesting, though, is perhaps: “David became the father of Solomon, whose mother had been the wife of Uriah.” (For those of you who worry about such things, Luke’s Gospel, which presumably traces Mary’s lineage, gives Nathan, rather than Solomon, but tradition says he is also a son of Bathsheba – so, same difference). The Second Book of Samuel takes 52 verses to describe the whole affair, from start to finish: he doesn’t go to war like he should, he can’t keep his eyes under control, he goes out of his way the find out who the woman is, he commits adultery, and then goes to great lengths to cover up his affair and ultimately to murder her husband. Yet, as terrible as these things are, even all of David’s failings play into God’s plan. In Mt 1:6, in just half the verse, as the evangelist traces out Jesus’ lineage, we hear quite simply, “David became the father of Solomon, whose mother had been the wife of Uriah.” The fruits of 52 verses of sin, and more sin, repentance, and punishment, are summarized in half a verse. The wife of Uriah shouldn’t be in the lineup of ancestors for the Savior, but she is, because God knows and sees and disposes all things.

Here, then, we can see quite clearly the “tainted nature” that we have, and yet, even in the midst of all that sinfulness, God raised up for us a savior, not because we were perfect, but rather because we needed one. We must have a “providential vision of life, to see all things as coming from the hands of God who loves us,” and that, as we read elsewhere: “all things work for good for those who love God.” God writes straight with crooked lines, and perhaps nowhere is that seen more clearly than as we await the birth of our Savior.

Through the intercession of Mary, Our Lady of Expectation, let’s ask for the grace to live out these last days of Advent in a spirit of joyful hope, knowing that even in the midst of worldly problems and difficulties, our God has raised up for us a savior.