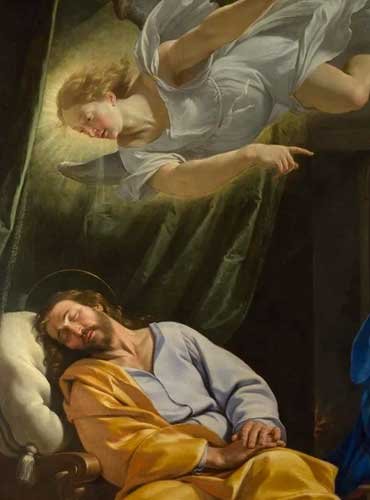 “What’s in a name? That which we call a rose by any other name would smell as sweet.” That’s what Shakespeare puts on the lips of Juliet in Romeo and Juliet. In today’s Gospel, Matthew recounts for us “how the birth of Jesus came about.” There’s a lot we can consider here, but a point worth mediating upon are the names that appear: we have the name Jesus, the name Emmanuel, and the name Joseph.

Regarding the first, the angel tells Joseph: “You are to name him Jesus, because he will save his people from their sins.” The name Jesus comes from the Hebrew Jeshua or Joshua, which means “Yahweh is salvation.” The Greek word for salvation is broad, and means “to rescue someone from some danger or difficulty, and to leave the healthy and intact.”

In the Old Testament, we find a number of Joshuas, but two stand out. First, we have Joshua, the successor of Moses. In fact, it was Moses who gave Joshua that name, as we read in the book of Numbers (13:16): “These are the names of the men whom Moses sent to reconnoiter the land. But Hoshea, son of Nun, Moses called Joshua.” Moses gave him that name because Joshua was faithful to God in the desert, and later he brought salvation to the Jewish people when he conquered their enemies. The salvation he brought was in this sense.

The prophet Zachariah (ch. 3) mentions a prophecy about a different Joshua, the high priest Joshua. “Now Joshua was standing before the angel,” he writes, “clad in filthy garments. Then the angel said to those standing before him, ‘Remove his filthy garments.’ And to him he said, ‘Look, I have taken your guilt from you, and I am clothing you in stately robes.’” Afterwards God tells him: “Thus says the LORD of hosts: If you walk in my ways and carry out my charge, you will administer my house and watch over my courts; and I will give you access to those standing here.” Thus, Joshua the priest will bring salvation, a spiritual salvation brought through his priestly ministry. However, the problem is that this Joshua has sins, and needs someone to make him clean before he can minister to others.

Jesus Christ comes with both the bravery and the strength of Joshua, the successor of Moses, and the power of intercession of Joshua, the high priest, and this in order to bring us the definitive salvation. We can ask ourselves: are we aware of how much we need the salvation and help that Our Lord brings? Am I really convinced that I need His help every day, that my small efforts aren’t enough?

The second name from today’s Gospel, isn’t simply about salvation, but about the way in which Jesus brought it to us. “God is with us”: God could have saved us from a distance, with just a word from heaven, or an action from far away. But He didn’t: “Behold, the virgin shall be with child and bear a son, and they shall name him Emmanuel, which means ‘God is with us.’” This mode of presence, God with us, is something totally new. God helped the Jews in the desert and against their enemies, but He was never “with them” in this new sense. For the Greeks, the gods were in the world, but against them.

Commenting on this, Pope-emeritus Benedict XVI said, “From this moment [of the Nativity], God is truly ‘God with us.’ No longer is he the distant God who can in some way be perceived from afar, in creation and in our own consciousness. He has entered the world. He is close to us. It is a message that cannot leave us indifferent. . . .  If it is true, it changes everything. If it is true, it also affects me. Like the shepherds, then, I too must say: Come on, I want to go to Bethlehem to see the Word that has occurred there.” Do we really appreciate the fact that God is “with us”?

Today’s Gospel also presents us with the figure of Saint Joseph. Given the Old Testament references that Matthew makes, our thoughts are drawn to compare the Old Testament Joseph of the coat of many colors fame with the New Testament Joseph. In addition to sharing the same name, there are four other significant similarities: 1. both have fathers named Jacob ([Mt] 1:16; Gen 30:19-24); 2. God spoke to both of them through dreams ([Mt] 1:20-21; [Mt] 2:13, 19-20, 22; Gen 37:5-11); 3. both were righteous and chaste ([Mt] 1:19; Gen 39:7-18); and 4. both saved their families by bringing them to Egypt ([Mt] 2:13; Gen 45 16-20). In this way, then, we come to see the Old Testament Joseph as a foreshadowing of the new; through the actions of the first, those who were to become the people of Israel were saved from bodily death, whereas through the actions of the second, namely, through his care of the Son of God, all people of the world were to be saved from eternal death.

Saint John Chrysostom explains that the word “just” used here to describe Joseph means “to be virtuous in all things,” and this is particularly seen in Joseph’s merciful gesture to Mary. Joseph knew Mary was with child, since the Annunciation had taken place at least three months before. Yet, he faced a dilemma: the Law required him to denounce her crime, or it would be taken to mean that he consented or approved of her deed. However, if he denounced her, she would be stoned. So, he decides to put her away quietly, so as not to take part in her supposed sin, but also to avoid cruelty and an excessive punishment. After the dream, Joseph willingly and immediately gives up his concerns and takes Mary as his wife. Here John Chrysostom finds another example of Joseph’s mercy: he notices that clearly Joseph didn’t voice his suspicions to anyone, not even to Mary, otherwise there would have been many explanations.

We can ask ourselves how well we follow the example of Saint Joseph: do we ask God’s guidance to know how best to be merciful, to know how to avoid sin and yet love the sinner? Are we quick to judge others and to let other people know what we know or assume about them?

Saint Bernadine of Siena writes that “Joseph was chosen by the eternal Father as the trustworthy guardian and protector of his greatest treasures, namely, his divine Son and Mary, Joseph’s wife.” These treasures are also given to us. Let us pray, through the intercession of Mary, Mother of the Incarnate Word, for the grace to always appreciate these treasures and to imitate Joseph in his fidelity and his mercy.