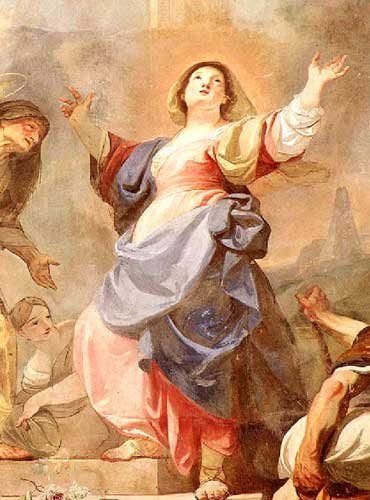 As Christmas approaches, Holy Mother Church places these two passages of scripture before us to help us prepare for the Nativity. Today’s first reading, from the first book of Samuel, recounts another miraculous birth, and the responsorial Psalm is actually taken from the passage that immediately follows it. This canticle is what Hannah prays in thanksgiving to God for having given her a son whom she in turn gave back to Him. Of course, we recognize the Gospel as the Magnificant, which we pray every day at evening prayer.

Both of these texts start off with personal praise for God and for the joy that He has granted to these servants of His. However, in both of them the tone changes, and both women reflect on how God’s blessings are bestowed, not simply on them as individuals, but rather on all of humanity. Pope Emeritus Benedict XVI pointed out that in that second section, Luke uses seven different verbs to describe what as God has done: “He has shown strength with His arm . . . He has scattered the proud . . . He has cast down the mighty from their thrones . . . He has lifted up the lowly . . . He has filled the hungry with good things . . . the rich He has sent empty away . . . He has come to the help of His servant Israel.” Although the sense is lost in English, in the Greek the verb forms indicate not simply something that God has done once, but something that He has done again and again throughout history, things that He does constantly. “Evident in these seven divine works,” Benedict writes, “is the ‘style’ in which the Lord of history inspires his conduct: He places himself on the side of the least. Often his plan is hidden under the opaque terrain of human vicissitudes, in which the ‘proud,’ the ‘mighty,’ and the ‘rich’ triumph. However, in the end, his secret strength is destined to manifest who God’s real favorites are: the ‘faithful’ to his Word, ‘the humble,’ ‘the hungry,’ ‘his servant Israel,’ namely, the community of the People of God that, as Mary, is constituted by those who are ‘poor,’ pure and simple of heart. It is that ‘little flock’ which Jesus invites not to be afraid, as the Father has willed to give it his kingdom (cf. Lk 12:32). Thus, this canticle invites us to associate ourselves to this little flock, to really be members of the People of God in purity and simplicity of heart, in love of God.” Today, as we approach the celebration of Christmas, we can ask ourselves: do we rejoice in all the many blessings God has given us, especially His Son who came to die for us? Do we share that joy, and remember to give thanks always? Do we remember that God is always at work, and that His will is always accomplished, no matter what? Let us pray, through the intercession of Mary, Mother of God, for the grace to magnify the Lord, and rejoice in God our Savior, who became man and died for us.