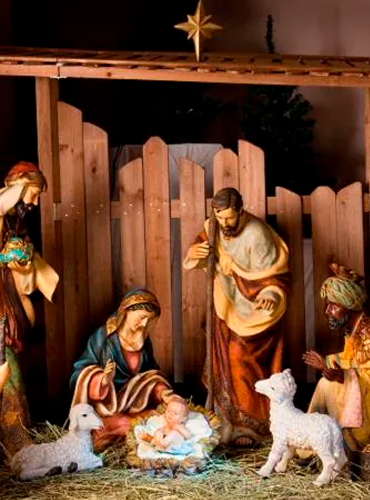 Christmas – Mass during the Day

Today’s readings all focus on the great gift that we have received with the birth of the Savior. In the first reading, the prophet Isaiah speaks of the overwhelming joy that is to be ours because Christ has come to us: “Hark! Your sentinels raise a cry, together they shout for joy, for they see directly, before their eyes, the LORD restoring Zion. . . . [The] LORD comforts his people, he redeems Jerusalem. . . .  All the ends of the earth will behold the salvation of our God.” The second reading, taken from the letter to the Hebrews, reminds us of how Christ reveals to us the Father: “In times past, God spoke in partial and various ways to our ancestors through the prophets; in these last days, he has spoken to us through the Son, whom he made heir of all things and through whom he created the universe, who is the refulgence of his glory, the very imprint of his being.” In the past, God spoke partially, and we understood only partially. Now, however, in Christ we have the fullness of Revelation: God “reveals the mystery, His plan of loving goodness, formed from all eternity in Christ. . . . [and He] has fully revealed this plan by sending us his beloved Son, our Lord Jesus Christ, and the Holy Spirit” (CCC, 50).

The Gospel for today is the beautiful prologue to John’s Gospel; it’s the very first part of his Gospel, the way he starts it off. It might strike us as sort of abstract and vague, especially for Christmas, when we’re used to hearing about the census, the shepherds, the stable, and the like. However, the beauty of John’s Gospel is that it takes a step back, and looks at the big picture, at salvation history as a whole, and shows us Christ’s role in it, and our place as well. There are three things in particular we can consider: first, that Christ brings us life, second, that He came to make us children of God, and, third, He came to reveal to us the Father. Life, children, and the Father.

John tells, “All things came to be through him, and without him nothing came to be. What came to be through him was life, and this life was the light of the human race; the light shines in the darkness, and the darkness has not overcome it.” All things came to be through the Son, and, even more than simply creating, He also gave life to some, and to us humans, He gave us the life of grace. That life of grace is the light which shows us where we should walk, what we should do and what we should avoid. “And the darkness has not overcome it,” meaning, the darkness of sin cannot extinguish that light. “In spite of the number of men darkened by sin, blinded by envy, shadowed over by pride, who have struggled against Christ (as is plain from the Gospel) by upbraiding him, heaping insults and calumnies upon him, and finally killing him, nevertheless they did not overcome that light,” because it is impossible to completely overshadow Christ.[1] No matter how dark the night of sin becomes, no matter what evil accomplishes in this world, no matter how terrible things might seem in the world, evil is always destined to be the loser in history. Christ will always have the final victory. The life of grace is always being offered to us; even if we are living in sin, God calls to us, begging us to return to Him. Such is the goodness and the greatness of our God, that He would even send His Son to bring us back to Him. We can ask ourselves: how convinced are we of Christ’s victory? Do we believe that He is the “way, the truth, and the life,” the “light of the world”?

Second, John tells that Christ came to give that life and that light to us! “He was in the world, and the world came to be through him, but the world did not know him. He came to what was his own, but his own people did not accept him. But to those who did accept him he gave power to become children of God.” The Gospels tell us plainly that not everyone accepted Christ when He came at the first Christmas; many rejected Him, and even today many work against Him, and refuse to accept Him as Lord. This is why John says Christ gave “the power to become children of God”: the power is the power to choose: we can accept the offer of becoming children of God, or reject it. The power lies in our choice. The sanctifying grace that Christ gives us makes us God’s adopted sons and daughters, images of our heavenly Father, who resemble Him both in our actions and in the heavenly reward that awaits us. We can ask ourselves: do we see ourselves as beloved children of our heavenly Father? Do we try to resemble Him in all that we do?

Thirdly, John tells us that “No one has ever seen God. The only Son, God, who is at the Father’s side, has revealed him.” This is what Paul says in the second reading: before Christ, we only knew about God partially and incompletely. In Christ, though, we have an image of God, and we can know Him. Just a child resembles their parents, so Christ is the most perfect image of God the Father. Furthermore, Christ, who is at the Father’s side, meaning who is closest to Him because they are consubstantial, know the Father best, and sees into the depths of the divinity, as it were. In Christ, we see the Father’s love revealed, His loving plan of salvation, and the graces that He wants to give us to help us follow Him to heaven. This is what we celebrate today: that today Christ dawned in this world of time, in order to bring us life, to make us God’s children, and to reveal to us the Father.

In a few minutes, we will be blessed to encounter this same Jesus of whom John the Evangelist writes in the Eucharist; every Mass is like another Christmas, because Jesus becomes present among us, and, just like then, He appears under the most humble of appearances. Then, He was laid in a manger in a stable, and now He hides under the appearances of bread and wine. Through the intercession of Mary, Mother of Our Lord, let us ask for the grace to set out in haste, seeking the Lord with all our hearts, enabling us to bear witness to the one who humbled Himself to become like us so that we could become like Him.

[1] Cf. Thomas Aquinas, Commentary on the Gospel according to Saint John.