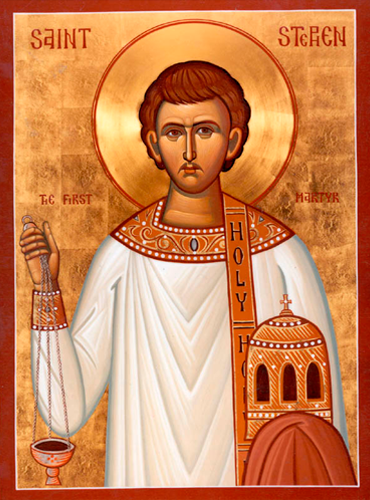 It might seem a little odd that today, the day after Christmas, Christ’s birthday, the Church has us recall a death: the death of Saint Stephen, the first martyr. Yet, far from raining on the Christmas parade, what the Church is doing is setting before our eyes a very profound truth about Christ and about our lives.

In the early Church, when almost all of the saints were martyrs, the Christians would gather and celebrate on the anniversary of the saint’s death. However, they called that day the dies natalis, literally, the day of birth, since on that day the saint was born again into eternal life. Even today, if you read the Roman Martyrology, the book that lists many of the saints in the Church for any given day, you’ll find that many of the entries say that the day is the “birthday” of a particular saint, meaning, they died on it. It’s the day they were born to eternal life. That birth to eternal life, however, is possible only because Jesus Christ was born in our world, and suffered and died for us, opening the gates of heaven for us and obtaining for us the graces we need to get there.

Here, then, we can start to see why these two celebrations of Christmas and Saint Stephen are set back-to-back. Really, we have two birthdays in a row, and it’s only because we have the first, that of Christ, that we can have the second, that of Saint Stephen.

As we continue through the Christmas octave, the feast of Saint Stephen is a call for us to reflect on how we live our lives each day: do we reflect the greatness of the gift of Christ’s coming in our daily lives, be it in the smallest of actions, or the greatest, most heroic deeds that are asked of us?

We can take for our example Venerable Fulton Sheen. In the beginning of his autobiography, Treasure in Clay, he makes an odd claim. He writes: “Let it be said here at the beginning that this is not my real autobiography. That [the real autobiography] was written twenty-one centuries ago, published and placarded in three languages, and made available to everyone in Western Civilization.” He is, of course, referring to the words on the cross: “Jesus Christ, King of the Jews.” That phrase, and that life, was really his life. Hopefully we can say the same things.

Let us pray, through the intercession of Saint Stephen and Mary, Queen of Martyrs, for the grace to truly appreciate and live out the graces we have received this Christmas.