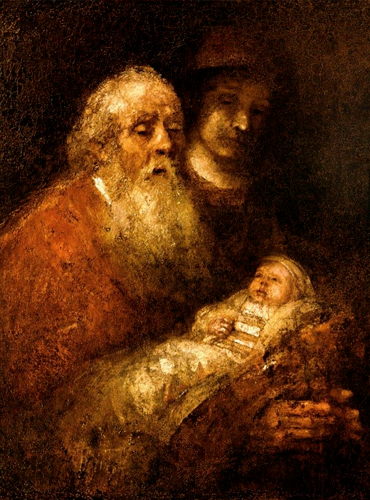 Regarding the first, Luke tells us that the Holy Family offered “the sacrifice of ‘a pair of turtledoves or two young pigeons,’ in accordance with the dictate in the law of the Lord.” If we actually look at the text in Leviticus (12:1-8), though, we find that the sacrifice should’ve been a lamb and a young pigeon. The pair of turtledoves or two young pigeons was the sacrifice to be offered if the woman was poor and couldn’t afford a lamb. We’re reminded of the poverty that Christ assumed when He entered into our world, how, although He was God, He emptied Himself, and became poor among the poor.

There is, however, a more profound reason for the sacrifice of two birds: Jesus Himself is the Lamb of God, and so Mary, in presenting her Son, did indeed present God with a lamb; the difference was that this Lamb was the one who would make everyone clean, and would pay the price of redemption for all.

No one in the Temple could see that, save two people: Simeon, and Anna, of whom we will hear tomorrow. Under the influence of the Holy Spirit, Simeon is able to see beyond mere appearances, and understand that finally he has seen what was promised him: the Savior has come, and he has even held Him in his arms. Simeon also predicts the radicality of Christ’s message: because of Him, many will rise, many will fall, and He will be a sign of contradiction. Christ doesn’t let us sit on the sidelines: either we join with Him, or we are against. There are no other options.

Today, then, as we reflect on this Gospel, we can meditate on both of these points: first, how well do we try to see God’s hand at work in the events of our daily lives? Are we constantly trying to see Him, even in the midst of trying events and difficult circumstances? Or are we, like most of the people in the Temple, simply caught up on appearances, and what seems to be the case? Secondly, how well do we embrace the radicality of Christ’s message? Are we constantly seeking His will, or do we allow ourselves to stumble and trip up over things that are difficult for us? A good example in this is Saint Thomas Becket, whom we commemorate today. Becket had lived a wild life, but, when appointed the Archbishop of Canterbury, he began to take the Gospel demands seriously, so much so that King Henry II, who was his closest friend, become his bitter enemy, so much so that, in time, Becket would be met with martyrdom.

Let us pray, through the intercession of Saint Thomas Becket and Mary, Our Lady of the Presentation, for the grace to seek out God in all things, and to embrace the fullness of the demands of the Gospel.