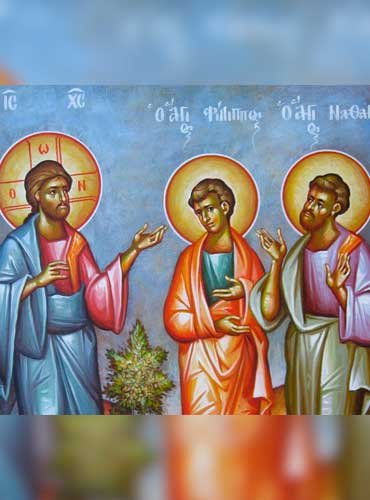 Memorial of Saint John Neumann, Bishop – Readings from before the Epiphany

As we continue our meditation upon the mystery of Christmas, the dialogue we just heard from the Gospel helps us to delve into that mystery more deeply. We see this in two points: first, Philip’s invitation and Nathanael’s response, and, secondly, Nathaniel’s interaction with Jesus. First, Philip told Nathanael that he had found “him of whom Moses in the law and also the prophets wrote, Jesus of Nazareth, the son of Joseph” (Jn 1: 45). As we know, Nathanael’s retort was rather strongly prejudiced: “Can anything good come out of Nazareth?” Commenting on this passage, Pope Emeritus Benedict the XVI writes that, “In its own way, this protest is important for us. Indeed, it makes us see that according to Judaic expectations the Messiah could not come from such an obscure village as Nazareth. But at the same time Nathanael’s protest highlights God’s freedom, which baffles our expectations by causing him to be found in the very place where we least expect him.” God chooses who He wants, when He wants, where He wants, for what He wants. For the birth of His Son He chose a poor virgin with a carpenter husband and a stable; to prolong the Incarnation of the Word, He chooses us, with our weaknesses, defects, and shortcomings. Yet, perhaps in a place or in a person where people would least expect it, holiness can be found. Likewise, even in the midst of trials and difficulties, holiness can be had.

In reply, Philip offers Nathanael a meaningful invitation: “Come and see!” Jesus Himself offered these words to disciples yesterday. Explaining Christ’s answer, and what it means here too, Thomas Aquinas comments, “Come and see, because the dwelling of God, whether of glory or grace, cannot be known except by experience: for it cannot be explained in words. . . .  And so Christ says, ‘Come and see’: Come, by believing and working; and see, by experiencing and understanding.” Draw near to Christ through belief and deeds, and you will see by experience and understanding where Christ remains. Again, Pope Benedict reminds us that “knowledge of Jesus needs above all a first-hand experience . . . we ourselves must then be personally involved in a close and deep relationship with Jesus,” and this is the invitation that Christ extends to us.

In the second half of the Gospel, in his encounter with Christ, Nathaniel is labeled “a true child of Israel. There is no duplicity in him.” Christ is referring to Jacob, who tricked his father Isaac in order to receive his blessing before Esau and was therefore deceitful. Although Jacob’s name was later changed to “Israel,” by calling him a “true son” Jesus relates him, instead, directly back to Abraham. This praise provokes the curiosity of Nathanael who answers in amazement: “How do you know me?”

Jesus’ reply about the fig tree is a mysterious one. Some fathers of the Church say that it is a reference to Messianic peace, since the fig tree is a symbol of it, and others, like Saint Augustine, that it refers to sin, since our first parents covered themselves with fig leaves. The fact remains, however, that only Jesus and Nathaniel really understand what the reference is to, and it is certain that the mere mention of the fig tree deeply affects Nathanael; it wasn’t some useless or idle reference, but rather something profound. Again Pope Benedict affirms, “[Nathaniel’s] heart is moved by Jesus’ words, he feels understood and he understands: ‘This man knows everything about me, he knows and is familiar with the road of life; I can truly trust this man.’” This is true of our lives as well: Jesus knows us, and knows us perfectly, even down to the smallest of details. He knows where we have been and where we are going. We can trust ourselves to His love and His providence, which never fails to provide for us.

Let us ask, through the intercession of Mary, Mother of God, and Saint John Neumann, for the grace to trust Jesus Christ and to look for Him even in the most unexpected places.