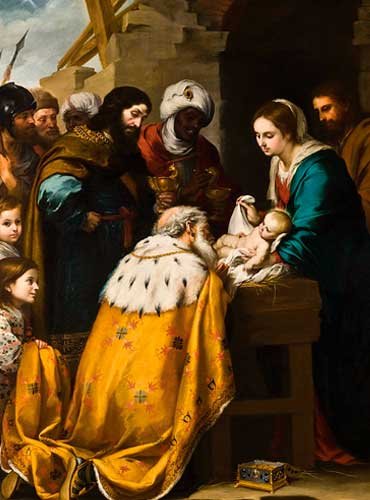 Memorial of Saint André Bessette – Gospel before the Epiphany

Today’s Gospel gives us an excellent opportunity to meditate on the importance of humility. John the Baptist tells his hearers that he is not worthy to stoop and loosen the thongs of Christ’s sandals, and Saint John Chrysostom, explaining this, puts the following words on John’s lips: “When you hear, ‘He is mightier than I,’ do not imagine that I said this by way of comparison. For I am not worthy to be ranked so much as among Christ’s servants, no, not even the lowest of His servants, nor to receive the least honored portion of His ministry.’ Therefore John did not simply say, ‘his sandals,’ he said ‘the thong of his sandals,’ the part counted least of all.”

Of course, the greatest example of humility we have is Christ Himself, and we can contemplate Him in the lowly manger in Bethlehem. This humility goes hand in hand with another virtue, as Saint Paul writes to the Philippians: “he humbled himself, becoming obedient to death, even death on a cross” (2:8).

Both of these virtues, humility and obedience, are exemplified by the saint we celebrate today, Saint André Bessette. Orphaned at a young age, and constantly in ill health, André learned to read only after he entered the Congregation of the Holy Cross; in fact, his parish priest had to write his application letter for him, since at the time Bessette could barely write his name. For forty years after his profession, he humbly washed floors and windows, cleaned lamps, carried firewood, and worked as a porter, which was his main office. In fact, he like to joke: “At the end of my novitiate, my superiors showed me the door, and I stayed there for forty years—without leaving.” As he become renowned for miracles (one estimate suggests he helped ten thousand people over twenty-seven years), he always attributed the miracles to Saint Joseph, insisting that he was only “St. Joseph’s little dog.” As he began work on what would become Saint Joseph’s Oratory of Mount Royal, now the largest church in Canada, he refused to call it “his” project, and instead would say, “God choose the most ignorant one. If there was anyone more ignorant than I am, the good God would have chosen him.”

This humility cannot be separated from his obedience, both to his superiors and to God’s providence. Regarding the first, as the number of sick people coming to see him increased, so did the complaints. At one point, his provincial was summoned before the archbishop, who asked, “Will André stop this work if you order him to?” The provincial assured him that André would. “Then let him alone,” replied the Archbishop. Regarding his obedience to providence, the Oratory was built through donations. In giving his permission for the construction, the archbishop stipulated that the congregation could not go into debt to build it. When renovations were needed and the depression hit the country hard, the construction stalled. Brother André simply told his superiors, “Put a statue of St. Joseph in the middle of the building. If he wants a roof over his head, he’ll get it.” The brothers listened, and within two months they had enough money to resume work.

Both Saint John the Baptist and Saint André Bessette show us what great things God can accomplish when we are humble and obedient. To practice these virtues is to imitate Christ, and to allow Him to work through us to accomplish what He wants, the way He wants, when He wants, and how He wants.

As we continue our way through this Christmas season and continue to contemplate the infant Jesus, let us ask, through the intercession of Mary, Mother of God, and Saint André Bessette, for the graces of humility and obedience.