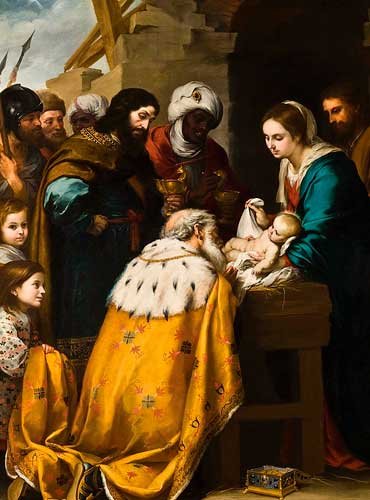 Epiphany of the Lord

Today we celebrate the Epiphany of the Lord. The word epiphany itself comes from the Greek word meaning reveal, and so on this day we recall how Christ reveals His saving presence to the world, meaning, to everyone, since Christ came to save everyone. At Christmas, the birth of Christ and the dawn of salvation was announced only to a few people; now, it is being made manifest to the world, since, as Saint Paul writes to the Ephesians: “the Gentiles are coheirs, members of the same body, and copartners in the promise in Christ Jesus through the gospel.” Salvation is for everyone.

Before, God’s redeeming work was only prefigured; it was something to be awaited, as the prophet Isaiah said in the first reading: “Rise up in splendor, Jerusalem! Your light has come, the glory of the Lord shines upon you. See, darkness covers the earth, and thick clouds cover the peoples; but upon you the LORD shines, and over you appears his glory. Nations shall walk by your light, and kings by your shining radiance.” Now, that has been fulfilled, and today’s Gospel recounts for us the first Gentiles to be led to Christ: the three Magi.

First, we have the appearance of the Magi in Jerusalem. There are three things that call our attention. First, even though tradition has given them names, the Gospel itself leaves them anonymous. The Magi might have been wise men, or even kings, and certainly they had great wealth if they could set out on a journey as soon as the star appeared and give such precious gifts. However, since they don’t have any names, we are reminded that what is really important in this life isn’t to have great worldly wisdom, or to have power, or even to be wealthy. The wise men aren’t remembered for any of those things. Rather, the three Magi are remembered because they put those things at the service of God and we, too, must dedicate our entire lives to seeking out the King of Kings, the only one who is really worthy to be served.

Second, it’s interesting to see how God called the Magi to Jerusalem in the first place: they tell King Herod: “We saw his star at its rising.” This short sentence tells us a great deal about these wise men. First, obviously these Wise Men had studied such things, and were able to recognize, not only the ordinary things in life, but also the extraordinary, and they allowed this extraordinary to point them towards God. It can happen sometimes that we lose sight of the wonder of creation and of all the good things that God has given us; sometimes God gives us extraordinary gifts and graces but, if we’re not used to seeing Him in the ordinary things of life, oftentimes we let the extraordinary pass us by.

Secondly, if the magi saw the star “right at its rising,” it means they must have been on the lookout for it. They were awaiting this sign and that’s why, when it came, they were able to snap immediately into action. We too need to be on the lookout for God’s will in our lives; if we’re not paying attention, we will miss the opportunities that present themselves daily to love and to serve Him.

Thirdly, the Magi don’t simply stay put after they see the sign; they set off into action, and travel whatever distance needed in order to find the newborn king and worship Him. We don’t know exactly where the Magi were from, but, if the reading from Isaiah applies to them, then they were probably from the Arabian peninsula, as far south as from modern day Yemen. That would make the journey around 1,600 miles which, on camel or on foot, would have taken a lot time and patience. Even for us, the journey to follow Christ is something that takes time and patience; we have a long distance to go before we reach heaven, but the most important part is to set out and continue moving forward.

This leads us to our second point: the Magi head to Jerusalem, and meet with Herod and his advisors. Immediately we notice the difference between the two groups. The Magi are content and indeed “overjoyed” to go and worship the newborn King, to go humbly and honor the One who is greater than they are. On the contrary, Herod is frightened about what all this means. The Magi were on the lookout for a sign; the Jewish leaders didn’t even know anything had happened, even though Jesus was the Savior they had been waiting centuries for. The Magi had no idea about the Scriptures or where the Messiah would be born; the Jewish leaders could pinpoint the city, and yet that knowledge did them no good.

We see three dangerous attitudes in Herod and his friends. The first is fear: it’s true that Jesus comes, and that demands a response from us. We have to change our lives and live in accord with His will and His teachings. Sometimes this demands study of the Church’s teachings and how we live them; sometimes it demands sacrifice, and sometimes it asks us to really be honest with ourselves and humble ourselves in confession. However, it never calls for fear, since “perfect love casts out fear,” and Christ loves us perfectly.

We see the right attitude towards Christ exemplified in the way the Magi respond when they finally find Him. Matthew tells us that “they prostrated themselves and did him homage [literally, they kissed the ground in front of Him]. Then they opened their treasures and offered him gifts of gold, frankincense, and myrrh.” The Magi sought the newborn King with all their hearts and, when they found Him, they worship Him and gave Him the best they had to offer: gold, to show that the child was a King, frankincense, to show that He is God, and myrrh, used for burial, to show that He would die for us.

Today, the Church places before us two options for our lives. We can decide how we celebrate Christmas now and throughout the year: do we follow the example of Herod, and refuse to make the efforts we need in order to change our lives, be it by going to confession, giving up some bad habit, or breaking with some vice? Or do we follow the example of the Magi, by seeking Christ humbly, especially in confession, by laying down our lives for Christ by living a life of sacrifice for our spouses, our children, and our families? Do we seek Christ in the midst of our daily activities, knowing that they, like the star, point to His presence among us?

As the Christmas season approaches its end, let us ask, through the intercession of Mary, the Mother of God, for the grace to follow the example of the Magi, and really seek the Lord while He may be found.