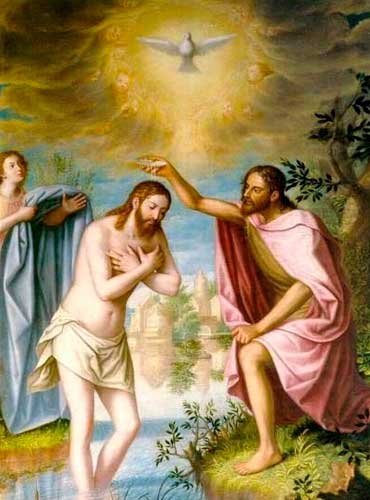 Today we celebrate the Baptism of the Lord, which rather unusually falls on Monday this year. If we really think about it, there’s a number of surprising things about this feast. For instance, we’ve been celebrating the Nativity of our Lord, as well as many of the events related to His birth and infancy, the Epiphany, the Holy Innocents, and the like, and yet now we suddenly have a feast that celebrates Christ as an adult.

Likewise, this celebration marks the end of the Christmas season, but really it commemorates a beginning, namely, the beginning of Jesus’ public ministry. For the end of such an important liturgical season, this celebration doesn’t really feel like an end at all, and that’s precisely the point: the newborn Christ at Christmas pushes us towards Christian growth and maturity, “so that we may no longer be infants,” as Saint Paul tells the Ephesians, who are “tossed by waves and swept along by every wind,” but rather reach full stature in Christ (Ep 4:13, 14). We often hear people talking about “keeping the Christmas spirit all year long,” as sort of trite cliché, but as Catholics, that’s really what we’re supposed to do: just as Christ grew and developed, we, too, can’t remain as spiritual infants: we have to keep growing, moving forward, and developing in our relationship with God.

The foundation or the reason for all of this is also found in today’s feast: we might think it unusual that the Father expresses His pleasure in Christ, saying, “You are my beloved Son, with you I am well pleased,” even before Christ has undertaken His public ministry. In a sense, at least to those who knew Him, Christ really hasn’t done anything.

Of course, to those of us with faith, we know, on one hand, that everything Christ did during those hidden years worked for our salvation. Even if we don’t know exactly what it was, we know that He was obedient to Mary and Joseph, and to His Heavenly Father.

Yet, on the other hand, and this is something that we should really reflect on, we can see here a deeper truth, one that is true not only for Christ, who is God’s only-begotten Son, but also for us, who are His children by adoption. That truth is this: God’s unconditional love for us must be the foundation for our lives. We, too, are His beloved children in whom He is well-pleased. It’s not that we earn God’s love, or that somehow we make ourselves worthy of it. Case in point: a few years ago I attended a conference where one of the speakers, a priest, was recounting how he had heard the confession of a woman and gave her a decade of the rosary as her penance. Well, there was some confusion because of language, and the woman returned the following week, saying she hadn’t completed her penance, because she had thought she had to pray twelve whole rosaries. She told the priest that she could only pray for a few hours, and then had to go back home and watch her children. Once the priest clarified the confusion, he asked her, “Didn’t you think that twelve whole rosaries was a lot?” and the woman replied, “Well, yes, but I thought that if that was what it was going to take to make God love me again, I would do it.” But, as the priest said, that’s not the way it works: God extends His love to us at all points in our lives, because, as Saint John says, God’s merciful love is “a prior love: He loved us [first] (1 Jn 4:10).”

God loves us even when we sin or live in sin, as Saint Paul tells the Ephesians: “But God, who is rich in mercy, because of the great love he had for us, even when we were dead in our transgressions, brought us to life with Christ (by grace you have been saved), raised us up with him, and seated us with him in the heavens in Christ Jesus, that in the ages to come He might show the immeasurable riches of His grace in His kindness to us in Christ Jesus.” Of course, God wants us to change our lives and to live entirely for Him; He doesn’t like the fact that we live in sin, and it wouldn’t be merciful of Him to want us to stay there, but the fact is that that love remains: we are always His beloved children, no matter how far we fall, not matter what stage we’re at in our lives.

In a particular way, though, we need to realize this great truth about each one of our brothers and sisters. We’re reminded that God the Father’s words, “This is My beloved Son,” or daughter, also apply to every single life from the moment of conception until the moment of natural death. From the smallest child in the womb, to the elderly lying in the hospital bed, there is no useless life, nor is there any life without value. It is our obligation to remind others of this, and to bear witness to the love that God has for each of His sons and daughters, each of whom He loves and wants, no matter how unloved or unwanted they might be in the eyes of the world.

Our certainty of God’s love for us, each one of us, is really the answer to this: as Pope-Emeritus Benedict XVI stated: “If ever man’s sense of being accepted and loved by God is lost, then there is no longer any answer to the question whether to be a human being is good at all. Doubt concerning human existence becomes more and more insurmountable. Where doubt over God becomes prevalent, then doubt over humanity follows inevitably.” If we doubt God’s love for us, or are unsure of it, we come to doubt the value of human life itself.

Let us pray, through the intercession of Saint John the Baptist and Mary, Mother of God, for the grace to live out our baptismal consecration by leaving behind sin and seeking to follow Christ as best we can.