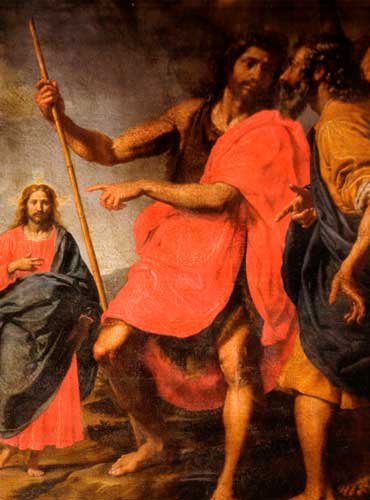 Today we celebrate the second Sunday of ordinary time. Last Monday, celebrating the Baptism of the Lord, we contemplated in a certain sense the summary of all the work of our redemption. Today the Church asks us to meditate on the person and work of our Redeemer, asking us to listen to what John the Baptist said about him.

First, it is the memorial, performed with the sacrifice of a lamb, of the liberation of the people of Israel from the slavery of Egypt. Listen to what the book of Exodus says, speaking of the paschal lamb: The Lord said to Moses and Aaron in the land of Egypt: This month will stand at the head of your calendar; you will reckon it the first month of the year (in other words, this is the beginning of something new). Tell the whole community of Israel: On the tenth of this month every family must procure for itself a lamb, one apiece for each household. . . .  Your lamb must be a year-old male and without blemish. . . . .  (as Jesus is male, without blemish). They will take some of its blood and apply it to the two doorposts and the lintel of the houses in which they eat it. . . . . (The blood of the lamb is placed on the wood of the doorposts, just as the blood of Christ runs down the wood of the cross). They will consume its meat that same night, eating it roasted with unleavened bread and bitter herbs. . . . . (The people need to eat the Lamb, as we consume the body of Christ in the Eucharist). But for you the blood will mark the houses where you are. Seeing the blood, I will pass over you; thereby, when I strike the land of Egypt, no destructive blow will come upon you. . . . (The blood of Christ defends us against the eternal death of sin). This day will be a day of remembrance for you, which your future generations will celebrate with pilgrimage to the LORD; you will celebrate it as a statute forever. . . . .  (And why forever? Precisely because it will be the way to recognize the true Lamb of God when he appears). You shall not break any of its bones. . . .  (this also like Christ on the Cross, as John tells us that The soldiers came and broke the legs of the first and then of the other one who was crucified with Jesus. But when they came to Jesus and saw that he was already dead, they did not break his legs. . . .  For this happened so that the scripture passage might be fulfilled: “Not a bone of it will be broken”). All of this is a meaning of what John said.

Second, what John said is a reference to the sacrifices of the Temple. Every day, the priests in the temple offered a lamb in the morning, and another in the evening, as a sacrifice to take away the sins of the people. Even in times of war and starvation, when the people had no food, they offered these two lambs: they always offered this sacrifice, until the Temple was finally destroyed in 70 AD. And Christ is the true lamb of God, who truly takes away the sins of the world.

Third, the lamb is a symbol of conquest, of victory. For us, it may seem a little strange, but the Bible speaks of David, Judas Maccabeus, and Solomon in precisely these terms. In the book of the Apocalypse, that is, the book of Revelation, the book that deals with the final victory of Jesus over the world and over sin, John uses this word Lamb twenty-nine times. The Lamb of God is the conqueror, the winner.

Well, all of this is beautiful, but, for us. . . what are we going to do? Now we can think about the other words of John, that is, speaking of Jesus, the Baptist says I did not know him. Didn’t he know Him at all? After all, they were family members, cousins. Sometimes the Bible speaks like this, not in the literal sense, but to say that a person did not know the reality, importance, of another person. For instance, in the book of Exodus we read that Then a new king, who knew nothing of Joseph, rose to power in Egypt. It probably means that the new king did not care who Joseph was and what he had done. For this reason, when John says he didn’t know Christ, it means that he didn’t know who He was in the depths of His being, that he didn’t know His importance in the world and in history. Look: we do the same thing. In every mass, we listen to the words. Behold the Lamb of God. But, have we really understood what these words mean? Have we perceived the importance of God, the Lamb of God, in our lives? John knew Jesus because he was docile to the Holy Spirit. He listened to his voice, and we must do the same thing: listen in prayer, think about it.

We ask Mary Most Holy, Model of Prayer, to obtain for us the grace to know Jesus the true Lamb of God well.