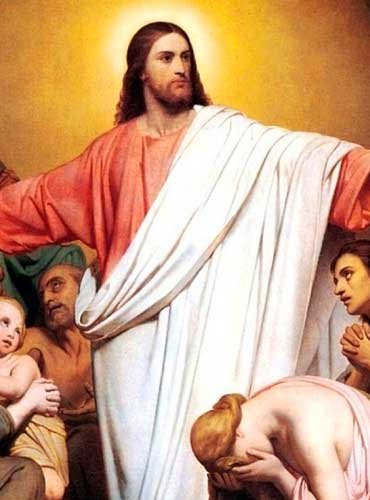 Today’s Gospel is very, very short, a whole two lines. However, we’re struck by the angry response of Jesus’ family members: they think He’s crazy! However, the reason they react this way, as Saint Bede says, is “since they could not take in the depth of wisdom, which they heard, they thought that He was speaking in a senseless way.” They couldn’t understand the wisdom that was coming from Him, and so they could only think that He was mentally ill.

Today is the memorial of Saint Agnes, who defied worldly wisdom in order to follow Christ. In a famous homily by Saint Ambrose, the great doctor of the Church, he recounts the irony of the martyrdom of one so young:

There was little or no room in that small body for a wound. Though she could scarcely receive the blow, she could rise superior to it. Girls of her age cannot bear even their parents’ frowns and, pricked by a needle, weep as for a serious wound. Yet she shows no fear of the blood-stained hands of her executioners. She stands undaunted by heavy, clanking chains. She offers her whole body to be put to the sword by fierce soldiers. She is too young to know of death, yet is ready to face it. Dragged against her will to the altars, she stretches out her hands to the Lord in the midst of the flames, making the triumphant sign of Christ the victor on the altars of sacrilege. She puts her neck and hands in iron chains, but no chain can hold fast her tiny limbs. . . .  In the midst of tears, she sheds no tears herself. The crowds marvel at her recklessness in throwing away her life untasted, as if she had already lived life to the full. All are amazed that one not yet of legal age can give her testimony to God. So she succeeds in convincing others of her testimony about God, though her testimony in human affairs could not yet be accepted.”

On Saturday, we also celebrate the Blessed Virgin Mary. We might ask ourselves why she is called the Seat of Wisdom, this heavenly wisdom that far surpasses the wisdom of the world. Saint John Henry Newman explains it this way: “Mary has this title in her Litany, because the Son of God, who is also called in Scripture the Word and Wisdom of God, once dwelt in her, and then, after His birth of her, was carried in her arms and seated in her lap in His first years. Thus, being as it were, the human throne of Him who reigns in heaven, she is called the ‘Seat of Wisdom.’”

Let us ask, through the intercession of Mary, Seat of Wisdom, for the grace to live out that heavenly wisdom, ignoring the threats and ignorance of the world and clinging to she who brought us wisdom from above.