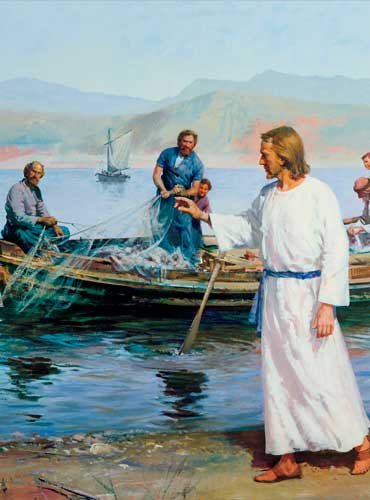 Today we continue our journey through the beginning of ordinary time; the green color of the vestments symbolizes growth and development, so ordinary time is far from boring time, even though it’s not perhaps as exciting as the Christmas or Easter seasons.

There’s a lot to think about in today’s Gospel. First, Matthew tells us that Jesus took the opportunity to begin to preach and work many miracles, starting with the lands of “Zebulun and Naphtali.”

Now, it’s rather odd that Matthew would refer to these places by that name, since over 700 years earlier those tribes had been deported from the region. As one commentator describes it, it would be like saying Paris is “in the territory of the Franks,” rather than in France.  Yet, Matthew is making a point, so that we can see the bigger, historical picture, how God has been at work through the whole of history. These areas, the lands of “Zebulun and Naphtali” were the places where the Assyrians first took the Jews captive, and its citizens were the first to be sent to Babylon. “Thus,” as an ancient gloss reads, “where the Law was first forgotten,” a place of darkness and death, “there the Gospel was first preached.”  It was appropriate that those thus struck by God’s wrath should be the first to receive His mercy, the first to hear the Good News from Christ Himself.  All things fall into place in God’s will; there are no chance events or sufferings that go forgotten. As Fulton Sheen wrote, “The Lord wounds, only so that He might heal.” From that wounded place, Christ goes out and spreads His healing grace: “He went around all of Galilee . . . curing every disease and illness among the people. His fame spread to all of Syria, and they brought to him all who were sick with various diseases and racked with pain, those who were possessed, lunatics, and paralytics, and he cured them. And great crowds from Galilee, the Decapolis, Jerusalem, and Judea, and from beyond the Jordan followed him.” All of this, in a land of suffering and despair.

Everything falls into place according to God’s plan. Indeed, in the part of Matthew’s Gospel that we’ve just heard, Matthew takes pains to give us two little details, details which might seem insignificant: he tells us that both sets of Apostles were fishermen, but that Simon and Andrew were “casting their nets into the sea,” while James and John were “in a boat mending their nets” when Jesus called them.

The casting of the nets, the actual time of fishing, was probably the highlight of the fisherman’s day. After all, that’s what being a fisherman is all about: fishing. Mending the nets, however, was a long and boring task: fishermen often spent as much time repairing their damaged nets as they did fishing. In the midst of both of these tasks, one exciting, one boring, Jesus called these men to draw near to Him, to follow Him.

The same happens with us, and in a particular way with those of us who are in religious life: Christ is constantly calling us to draw nearer to Him. Sometimes, He calls in the midst of exciting tasks and challenges, where it’s easy for us to revel in the joy of His call. Yet, much more often than that, Christ calls us through the boring, everyday tasks.

The Servant of God the Jesuit Father Walter Ciezek spent years in Soviet prison camps, and in one of his books, He Leadeth Me, he gives the following reflection on the monotonous daily grind. He writes: The Gospels show us Christ the teacher, the healer, the wonder-worker, but these activities of his public life were the work of three short years. For all the rest of the time of his life on earth, God was a village carpenter and the son of a carpenter. He did not fashion benches or tables or beds . . . by means of miracles, but by hammer and saw. . . .  He worked long hours to help his father, and then became the support of his widowed mother, by the rough work of a hill country craftsman. Nothing he worked on, as far as we know, ever set any fashions or became a collector’s item. He worked in a shop every day, week in and week out, for some twenty years. . . .  There was nothing spectacular about it, there was much of the routine about it, perhaps much that was boring. There is little we can say about the jobs we do or have done that could not be said of the work God Himself did when He became a man. Yet, he did not think it demeaning, beneath his dignity, dehumanizing. . . .  He worked day in and day out for some twenty years to set us an example, to show us that these routine chores, too, are not beneath man’s dignity or even God’s dignity, that simple household tasks and the repetitive work of the wage earner are not necessary evils but noble and redemptive works worthy of God Himself. To eat one’s bread in the sweat of one’s brow is to do nothing more or less than Christ Himself did. And He did it for a reason. He did it for years on end, He did it for more than three-quarters of His life on earth, to convince us that God has not asked of us anything more tedious, more tiring, more routine and humdrum, more unspectacular than God Himself has done. He did it to make it plain that the plainest and dullest of jobs is – or at any rate can be, if viewed properly in respect to God and to eternity – a sharing in the divine work of creation and redemption, a daily opportunity to cooperate with God.[1]             “If viewed properly in respect to God and to eternity”: this means done with love for God. When we do even the boring tasks with great love, the time passes quickly and we can’t be bored. In Genesis we read that “Jacob served seven years for Rachel, yet they seemed to him like a few days because of his love for her.”[2] Those years of boring work tending sheep seemed like nothing, because he loved her. “Without love, everything is painful, everything is tiring, everything is burdensome. The Cross, taken up hesitantly, is crushing; taken smilingly, by free will, and with love, it will carry us much more than we carry it. Love makes time eternal by giving a divine value to everything.”[3] As we begin ordinary time, then, let us ask for the grace, through the intercession of Our Lady, Mother of Divine Love, to love Jesus and the Cross, especially those crosses that come in the form of everyday, boring tasks.