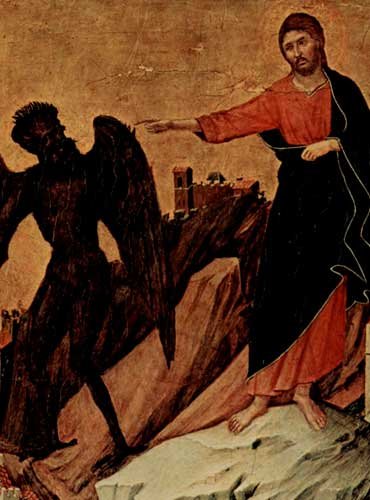 Monday of the Third Week in Ordinary Time – Mk 3:22-30
Today’s Gospel from Mark presents us with the complaining of the scribes who came up from Jerusalem, who claim that Jesus was able to drive out demons by the power of the prince of demons, and Jesus’ response. There are two things that really call our attention about the scribes. First, Mark tells us that they “had come from Jerusalem.” That might not seem that important, but these chapters of Mark’s Gospel are taking place in Galilee, around the city of Capernaum. Now, the distance from Jerusalem to Capernaum is about 100 miles: that’s a long way to walk if all you’re going to do is complain. Second, notice that the scribes didn’t deny the miracle; in other words, they accepted the fact that Jesus really had expelled a demon, but, rather than rejoice in it, they took it in completely the wrong way, attributing that good work to the devil himself.

We can take these two points, and apply them to our vocations and lives. First, we know that our vocations are entirely unique and precious graces given to us by God. Even if we didn’t walk 100 miles, internally, the spiritual distance that we’ve traveled has been even greater, since the turning away from the world and the complete surrender of one’s self to God is truly one of God’s masterpieces. Even in the face of such a great miracle, though, there’s often that temptation to complain or to reject some suffering or tribulation, some small trial or correction, some spiritual struggle or desolation, as though God didn’t permit it or know about it. Our response must be, in the words of Saint Alphonsus Ligouri, to “unite ourselves to God’s will not only in things that come to us directly from His hands, such as sickness, desolation, poverty, death of relatives, but likewise in those we suffer from man—for example, contempt, injustice, loss of reputation, loss of temporal goods and all kinds of persecution. On these occasions we must remember that while God does not will the sin, He does will our humiliation, our poverty, or our mortification, as the case may be. . . . Let us then abandon everything to God’s good pleasure, because being infinitely wise, he knows what is best for us; and being all-good and all-loving—having given his life for us—he wills what is best for us. Let us, as St. Basil counsels us, rest secure in the conviction that beyond the possibility of a doubt, God works to affect our welfare, infinitely better than we could ever hope to accomplish or desire it ourselves.” We have an excellent example of this in Saint Thomas Aquinas. When he decided to become a Dominican, his family literally kidnapped him and held him in the family castle, waiting for him to take off his habit and reject his vocation. Rather than anger him or break his resolve, that imprisonment provided him the opportunity memorize almost the entire Bible and the works of Aristotle, as well as to bear such a witness to the religious life that one of his sisters soon followed him in consecrating herself to God. We can ask ourselves: how well do we unify our wills with Christ’s? Do we see all things as coming from His hands?

Secondly, the Gospel should put our hearts at ease, since it reminds us who is really in charge in the world. Some scholars have pointed out that the name “Beelzebul” means “lord of the dwelling,” the one who is in charge of the home, and we see this meaning reflected in the imagery that Christ uses. Satan has some power in the world, where he guards his possessions, but Christ is really the one who is in charge, since the devil only has as much power as Christ permits him to have. Against Christ’s power, Satan is really no match. Christ reminds us of this during the Last Supper discourse: “I have told you this so that you might have peace in me. In the world you will have trouble, but take courage, I have conquered the world.” When we unite ourselves to God’s will, making our wills uniform with His, we’re reminded, especially in the midst of difficulties, that Christ is the one who pulls all the strings, who knows everything, and who orders everything for our good.
Let us ask, through the intercession of Mary, Mother of Christians, for the grace to find our peace in Christ, and to have a providential vision of life, knowing that He orders all things for our good.